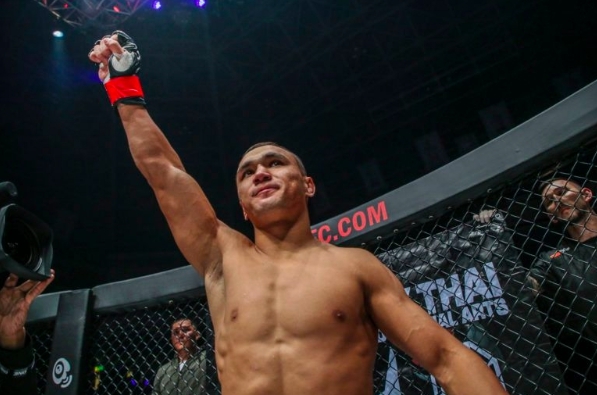 Former ONE Flyweight World Champion Kairat “The Kazakh” Akhmetov has nothing but kind words for his next adversary before they both step inside the ONE Circle. The 33-year-old from Almaty, Kazakhstan threw heaps of praises towards the Philippines’ Danny “The King” Kingad ahead of their highly-anticipated flyweight bout.

Akhmetov and Kingad will meet at the center of the Circle at ONE: BIG BANG, which broadcasts live from the Singapore Indoor Stadium in Singapore on Friday, 4 December.

Before he locks horns with the Filipino top flyweight, Akhmetov took the time to study his opponent and offer his take on their impending showdown.

“He doesn’t have many holes in his game. He is a complete fighter who can strike, wrestle, and grapple well. He always has good cardio too. But me and my coach have analyzed him a lot. Everyone has some weak spots, and I will work on exploiting him when we meet,” said Akhmetov.

Kingad is one of the Philippines’ finest young martial arts talents. “The King” is a winner of seven of his last eight contests. He earned a spot in the ONE Flyweight World Grand Prix in 2019, beating highly-touted opponent Senzo Ikeda in the quarter-finals.

Kingad was supposed to meet Akhmetov in the semi-final round, but with the latter being injured, Australia’s Reece McLaren stepped in to replace “The Kazakh”. The Filipino overcame a tough challenge from McLaren to earn a date with former UFC legend Demetrious “Mighty Mouse” Johnson, whom he lost to in the final round.

All the while, Akhmetov has been watching on the sidelines as Kingad put together a fantastic run. Needless to say, the two have been on a collision course. After a long wait to face Kingad, Akhmetov is relieved he can now finally meet “The King” in the Circle, so they can settle their unfinished business once and for all.

“Danny is a very interesting fighter with a big heart, and a strong will to win. He is a very explosive, and well-rounded athlete. This bout is interesting to me because we were supposed to face each other in the Grand Prix. Now, we have a chance to finish our business. I have only a good impression of him. He is a really good and worthy opponent,” said Akhmetov.

“I’m confident in all areas of my game. I’m not just a wrestler. We are ranked very high in this division, and this match is a can’t-miss for all fans. There’s a lot on the line in this one. I will do everything in my power to get my hand raised on that day. Everything else is up to the Almighty.”

ONE: BIG BANG is the first of ONE Championship’s live event offerings in the month of December. The main event features a showdown between ONE Light Heavyweight Kickboxing World Champion Roman Kryklia of the Ukraine and challenger Murat “The Butcher” Aygun of the Netherlands.