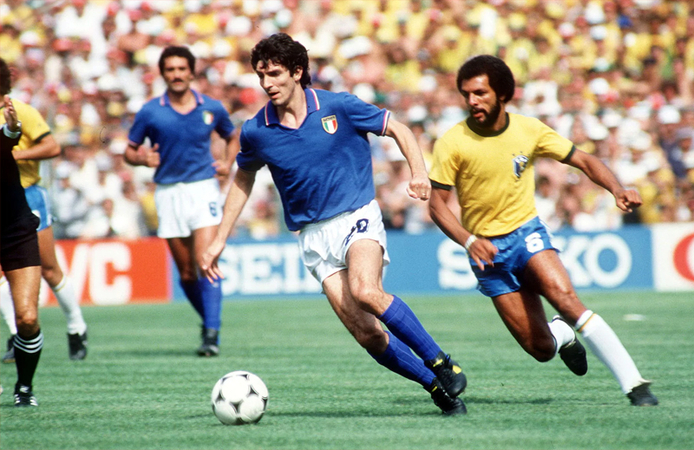 Paolo Rossi became a national hero in Italy at age 25 - and remained so all his life - when he helped the national soccer team to victory at the 1982 World Cup in Spain. The center forward, or striker, scored the first goal for the Azzurri (the Blues) in the final against West Germany as Italy triumphed, 3-1, at Santiago Bernabéu Stadium in Madrid.

The victory, Italy's first in the World Cup since 1938, brought ecstasy to millions of Italian fans glued to their screens at home. Their country was beset by political and social unrest, but the success of their soccer team unleashed an outpouring of emotion and a badly needed feeling of joy and national unity.

Italian kids, even adults, rushed to buy blue Italian soccer jerseys bearing Rossi's number 20 on the back. "Pablito," as Italian fans nicknamed him, was also given the coveted Ballon d'Or (Golden Ball) as 1982 European player of the year, more recently dominated by the Portuguese star Cristiano Ronaldo, now of Juventus in Italy, and FC Barcelona's Argentine wizard Lionel Messi. The respected U.K. magazine World Soccer also gave him its inaugural World Player of the Year award.

Rossi, 64, died Dec. 9 at a hospital in Siena, Italy, according to the Italian TV channel RAI Sport, where Rossi had worked as a soccer pundit. The channel cited Rossi's family, which did not specify the cause of death.

That Rossi even got into the 1982 World Cup squad at the last minute was remarkable and fortunate - for him and, as it turned out, his country.

In 1980, he had been banned from soccer for three years after a match-fixing scandal, known as the Totonero (black-betting). He was accused of involvement but issued denials. At the time, he was one of the world's highest-paid players, lining up for the club Perugia.

An investigation involving 13 teams in Italy's two top leagues, Serie A and Serie B, found, among many other cases, that a match involving Perugia - a 2-2 draw with Avellino - had been fixed by a betting syndicate.

His ban was reduced to two years, by which time he had been signed by the Turin club Juventus, allowing Italy Manager Enzo Bearzot to include him in his 1982 World Cup squad.

Bearzot came under heavy criticism from the soccer-mad Italian media when Rossi looked unfit during the first three group matches. The Italian newspaper Gazzetta dello Sport described the striker as "a ghost wandering aimlessly around the field."

Bearzot stuck with him, however, in the next round for the crucial matches against two of the world's greats, Argentina, reigning world champions at the time, and Brazil, already three-time champions and tournament favorites in 1982.

Italy beat Argentina, 2-1, shutting down the soccer marvel Diego Maradona, but it was in the riveting game against Brazil that Rossi erased memories of the match-fixing ban.

It was July 5, 1982, in the Estadio Sarría, Barcelona. Every non-Italian lover of the "beautiful game" expected and wanted the magical Brazil side to win and go through to the semifinals. Not to be.

Rossi scored all three goals - a hat trick - as the Azzurri beat Brazil, 3-2, sending the soccer-crazy fans in the South American nation into shock and mourning. Many soccer writers have called it the greatest World Cup match ever.

Rossi later described that game, and Italy's ultimate triumph over West Germany, as a "personal redemption" after the betting scandal.

He then scored both goals in Italy's 2-0 win over Poland in the semifinals and, of course, another one in the final triumph against West Germany.

Paolo Rossi was born in Prato, northwest of Florence, on Sept. 23, 1956. He first came to the notice of big-team talent scouts as a prolific scorer for Vicenza, west of Venice. That earned him a move to Juventus, winning the European Cup in 1985.

Unlike most world-class players in modern times, he spent his entire club career in Italy, gaining two Serie A (the top league) titles. He also played for AC Milan and Verona.

Retiring in the late 1980s, he became a popular TV soccer pundit on Sky Sports and the Italian national broadcaster RAI.

His first marriage, to Simonetta Rizzato, ended in divorce. In 2010, he married Federica Cappelletti, a journalist. In addition to his wife, survivors include a son from Rizzato; two daughters from Cappelletti; and a brother.