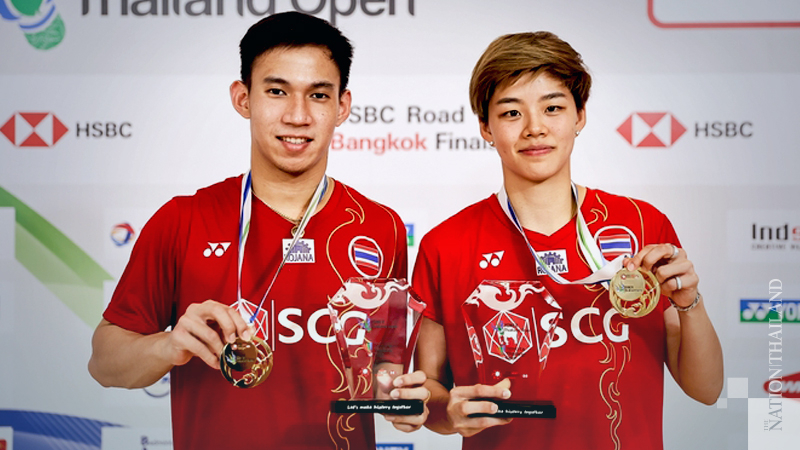 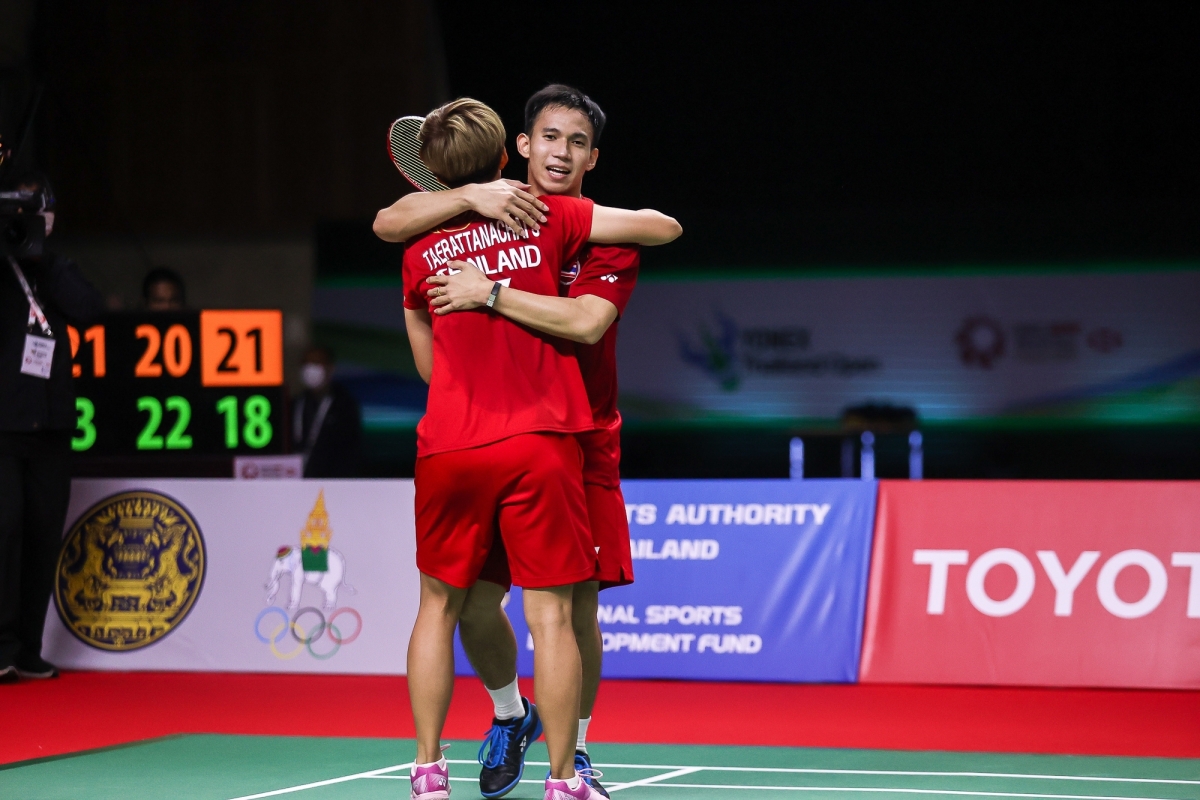 The Thai pair won the mixed doubles title, their first ever on homesoil after a hard-fought, three-game thriller at Impact Arena, Muang Thong Thani on Sunday.

The 21-3, 22-20, 21-18 victory was not only sweet revenge for Dechapol and Sapsiri against Praveen and Melati, to whom they had lost 1-2 in the final of the All-England Open Championships last March, but also handed the Thai duo their first win in the World Tour Super 1000 event, the first Thais ever to achieve so.

However, seventh-seeded Jongkolphan Kititharakul and Rawinda Prajongjai did not have the same luck. They were outplayed by two-time champions Greysia Polii and Apriyani Rahayu of Indonesia 21-15 21-12 in the women's doubles final. It was the third Thailand Open title for the pair, who had also won in 2017 and 2018. But Polii has won this title four times, the first with Nitya Maheswari in 2013.

Top seeds and world No. 3 Dechapol and Sapsiree got off to a brilliant start against the second seeds and world No. 4 from Indonesia, taking a 7-3 lead in the opening game. The Thai duo dominated with back-to-back powerful smashes, allowing their opponents no chance to attack, winning the game easily at 21-3.

The Indonesians fought back in the second game and quickly surged to a 13-8 lead. However, their joy was short-lived as Dechapol and Sapsiree tightened their defence and bounced back with lightning-fast attacks and effective cross-court drop shots to draw level at 20-20. Praveen and Melati hung on to tie the match 1-1, winning the second game 22-20.

Dechapol and Sapsiree played with more consistency in the thrilling decider. As the Indonesians improved their defensive tactics to lead 13-10, the Thai pair showed their power and footwork to level scores at 13-all and again at 17-all. After that, Dechapol and Sapsiree attacked relentlessly, allowing the opponents only one more point to capture the decider 21-18 and the mixed doubles title.

The victory has improved the Dechapol/Sapsiree's head-to-head record to 3-4 against Praveen and Melati. 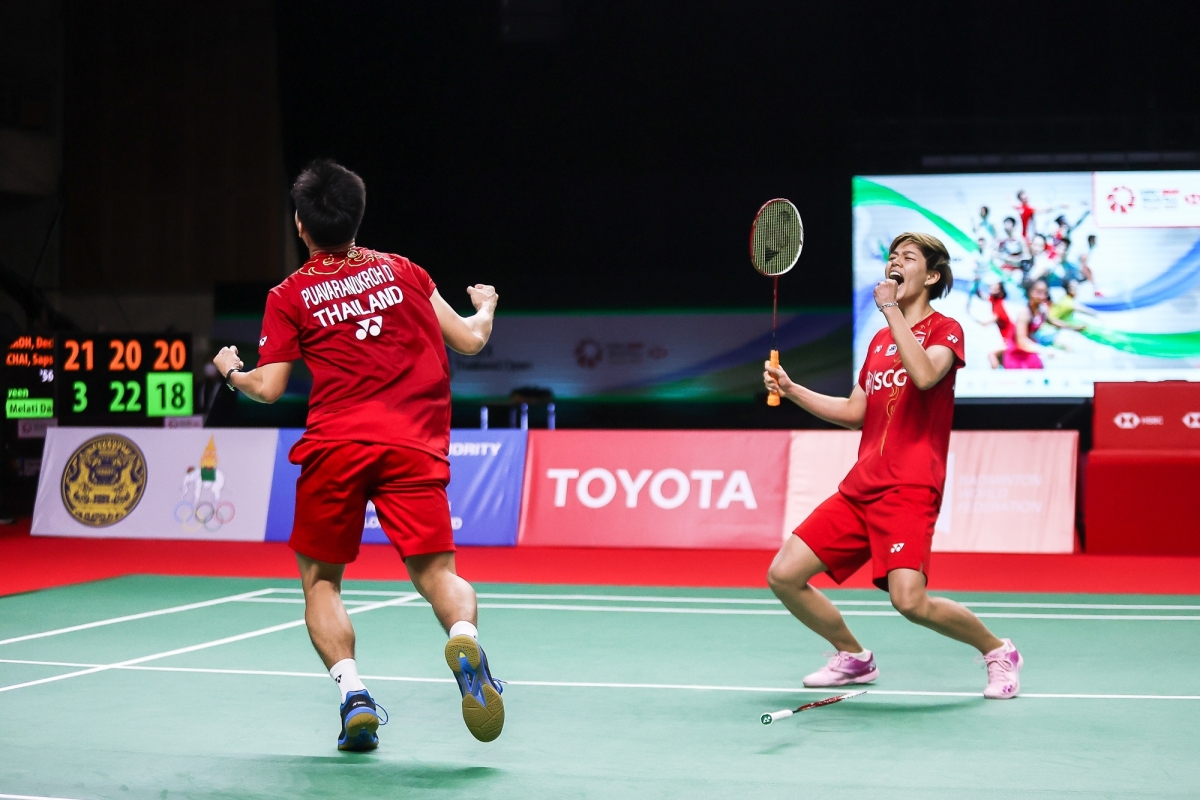 “It was an intense match. We did not let them play an attacking game against us. Instead, we played more aggressively to prevent them from attacking. They also made more mistakes than us. I would like to thank them for teaching us. Despite our hard training for nine months, we still had many mistakes to learn and correct. I think we were well-prepared for this match, while they had much more pressure and made more mistakes," said Dechapol who had earlier won three titles alongside Sapsiree in the Singapore Open, Korea Open and Macau Open, all in 2019.

“After all tournaments were cancelled due to the impact of Covid-19, we still continued our hard training to make us well-prepared for three major events in Thailand. Winning the Yonex Thailand Open has boosted our confidence to play much better in the remaining two events. After this, we have to stay in good shape, physically and mentally and maintain our concentration,” said Sapsiree.

“I would like to thank all Thai fans and supporters. We will try to do our best in the next tournament -- the Toyota Thailand Open,” she added.

The next event will be the Toyota Thailand Open World Tour Super 1000 to be held from January 19 to 24 at Impact Arena, Muang Thong Thani.