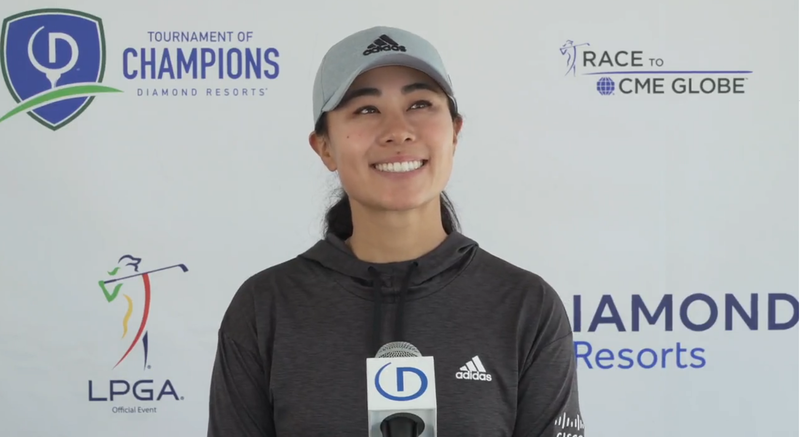 The LPGA Tour returns to play with the third playing of the Diamond Resorts Tournament of Champions presented by Insurance Office of America.

Winners from the 2018, 2019, and 2020 seasons have made their way to Four Seasons Golf and Sports Club, with 2020 DRTOC winner Gaby Lopez hoping to reclaim the title she earned after emerging victorious from a seven-hole playoff that spilled into Monday. She is joined by three players inside the top 10 of the Rolex Women’s World Golf Rankings in No. 4 Nelly Korda, No. 5 Danielle Kang and No. 6 Brooke Henderson.

NOT MUCH REST, BUT DANIELLE KANG MAKES IT TO DRTOC

Nearly a month has passed since Rolex Ranking No. 5 Danielle Kang stood on the 18th green at Tiburon Golf Club in Naples, Fla., with a smile on her face and the 2020 Vare Trophy in hand. Yet despite the holiday break, Kang says she doesn’t feel that rested heading into this week’s Diamond Resorts Tournament of Champions.

“It wasn't really a break. There were two moves. I moved, then I got exposed to Coronavirus twice,” said Kang, who arrived in Orlando from her Las Vegas home on Monday. “Had to quarantine twice. Take six tests in the last two weeks. It's been a little hectic.”

Luckily for Kang, this week’s tournament is a bit more laid back with more than 50 celebrities competing alongside the Tour players. This is Kang’s third consecutive tournament appearance and for the third straight year, she’ll spend a round with country musicians Cole Swindell and Lee Brice.

“I play with them every year, the three of us get paired. I'm really excited to see them,” said Kang, who will join her musical friends off the first tee at 9:40 a.m. on Thursday. “I just saw Lee earlier today and his crew. Those boys are really, really nice guys. At least once a year we get to play golf no matter what, which is here, and I'm really excited. I'm excited for the tournament to be here every year, and I asked (Diamond Resorts CEO) Mike Flaskey to don't ever take it away, because it's a pretty awesome event. He's doing so many good things with his charity and clothing line and all that stuff.”

Madelene Sagstrom has been a fixture at the Diamond Resorts Tournament of Champions since the season-opener joined the LPGA Tour schedule in 2018. She could always be found walking the range and chatting with new and interesting people (two things she loves to do). But up until now she has observed the competition from outside the ropes.

“Everybody kept asking, ‘Why are you not playing?’” Sagstrom said. “I was like, ‘You have to win.’”

And win she did, almost exactly a full year ago at the Gainbridge LPGA at Boca Rio. In her fourth year on the LPGA Tour, the 28-year-old from Enkoping, Sweden, finally broke through with a victory after having already competed on one Solheim Cup team and represented her home country at the UL International Crown in the Republic of Korea.

“So now I get to play,” she said with a smile on Tuesday.

But the answer begged another question. Of all the events on the LPGA Tour calendar, why did Sagstrom hang out at this one before she was eligible to be in the field? “Because I play out here,” she said of the Four Seasons Golf and Sports Club in Lake Buena Vista, Fla., less than a mile from the front gates to Walt Disney World’s Magic Kingdom. “I’ve lived here four years and really enjoy being out here.”

Sagstrom lives about 15 minutes from the course and is a regular, especially in the

AFTER AN UNEXPECTED 2020, BRITTANY LINCICOME IS READY FOR A SEASON SHE’S MORE USED TO

With a worldwide pandemic and a newborn on her hands, eight-time LPGA Tour winner Brittany Lincicome spent a lot of time adjusting in 2020. After giving birth to daughter Emery in July 2019, the Floridian knew it would take time to get used to Tour life again.

“It's just getting back in a rhythm. Obviously last year having Emery and then the COVID stuff I had to take almost a year off, which is something I've never done. It was more like the nerves of it and just getting back in a rhythm,” said Lincicome, who finished the 2020 season strong with a T13 finish at CME Group Tour Championship less than a month ago. “Obviously, a lot of weeks off. It was kind of two weeks, week off, two weeks. It was just hard to get in a rhythm really, so towards the end of the season, obviously had a few more tournaments under my belt. Kind of seemed to start coming together, and then unfortunately the season was over. Hopefully we can pick up on that quickly again and get right back into it.”

Always the optimist, the 17-year LPGA veteran wishes normalcy for the entire Tour and is always looking for the proverbial silver lining in a difficult situation. While 2020 saw a plethora of canceled and adjusted events, the 35-year-old was happy to see this week’s Diamond Resorts Tournament of Champions and its fun events still in play, even if the Tour players cannot fully participate due to COVID-related restrictions.

“I was so glad to see this event didn't have any hiccups. We obviously look forward to it. We're not allowed to go to the concerts unfortunately, which is a bummer, but it's still just them having it. Maybe I can sit in a car and roll down the window and hear the concerts, because it's outside,” Lincicome joked with a laugh.

Linciome will tee off in Thursday’s first round at 9:10 a.m. off No. 10, playing alongside Major League Baseball players Josh Beckett and Joe Carter.

When the 2020 Diamond Resorts Tournament of Champions spilled over to Monday before Gaby Lopez won in a scintillating seven-hole playoff, anticipation for the new LPGA Tour season was off the charts. Who knew a global pandemic would socially distance that enthusiasm? But the best way to put memories in the rearview mirror is with a celebration and the Diamond Resorts is just the ticket to kick off 2021.

The year ahead has more tournaments, more prize money, more great venues, more TV exposure, the Olympics and the Solheim Cup. The Diamond Resorts Tournament of Champions Presented by Insurance Office of America at the Four Seasons Golf & Sports Club in Orlando with its select field of 25 professionals and star power of 50 celebrities starts things off with appropriate sizzle.

The LPGA winners-only field plays for a $1.2 million purse over 72 holes with no cut. The sports and entertainment celebrities compete for a $500,000 purse of their own using a modified Stableford format. And all of the fun can be seen on Golf Channel Thursday and Friday then NBC on Saturday and Sunday.