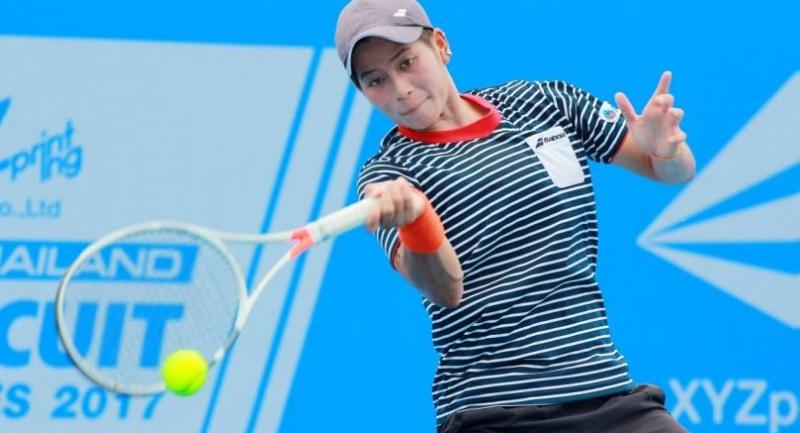 Peangtarn Plipuech returns a forehand to Margarita Lazareva of Russia.

It was a walk in the park for Peangtarn in Hua Hin. Second seed Peangtarn Plipuech had a stroll in the park at the US$25,000 Cal-Comp & XYZ Printing ITF Pro Circuit W3, beating Russia’s Margarita Lazareva 6-1 6-2 win yesterday.

The world No 270, a quadruple University Games gold medallist, rarely plays in tournaments at home as she feels the stress is too much to bear. Yesterday at the True Arena Hua Hin, the Thai was barely challenged by her rival.

“I kept hitting the balls everywhere and forced her to make errors,” said the 24-year-old from Nonthaburi who is playing her second ITF tournament at home in two years.

“I think people expect a lot from me when I play at home. People say many things and young players keep their eyes peeled on me, which is something I am not used to and feel uncomfortable about. I don’t get the same attention when I play abroad. I’m trying to get over that feeling,” said Peangtarn, whose target is to win the tournament this week but doubts her ability to pull it off.

“It’s been a long time since I won a title [in Tsukuba, Japan last August]. I have a tough opponent tomorrow. It won’t be easy as she is very consistent and had beaten me before,” said Peangtarn, who takes on South Africa’s Chanel Simmonds, a 6-4 6-1 victor over Patcharin Cheapchandej. Peangtarn’s close friend and third seed Nicha Lertpitaksinchai ousted Sara Tomic of Australia 5-7 6-3 6-0. Nicha was serving for the first set at 5-4 but let errors creep into her game to drop the next three games and the set. She, however, regained her composure to dominate the rest of the match.

“I rushed too much and paid the price. I took the initiative and opened the court more in the second and third sets,” said Nicha, who lost in the first round in all four events she had played in Hua Hin. She will meet fifth seed Harriet Dart in the quarter-finals. The Briton defeated Bunyawi Thamchaiwat 6-2 6-3.