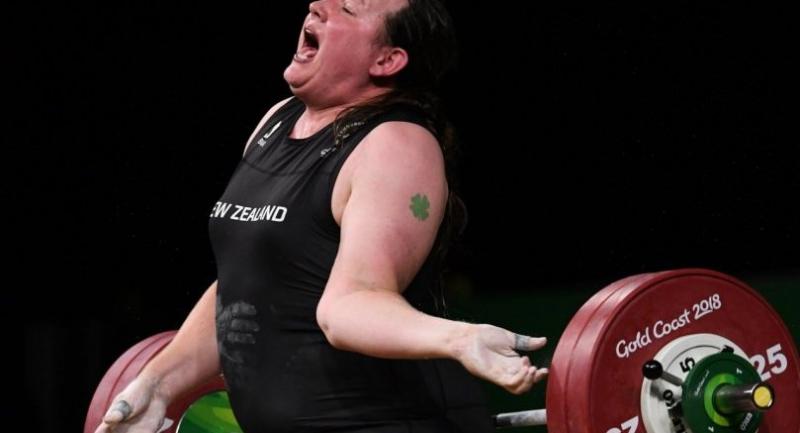 Laurel Hubbard of New Zealand injures herself during for the Women's 90kg Weightlifting Final on day five of the XXI Commonwealth Games on the Gold Coast, Australia, on April 9.//EPA-EFE

Gold Coast, Australia - A transgender weightlifter from New Zealand whose appearance drew criticism at the Commonwealth Games pulled out mid-competition on Monday after she painfully injured herself attempting a record lift.

Laurel Hubbard, 40, looked in distress when her left elbow gave way attempting to snatch a Games-record 132kg, when she was already leading the women's +90kg competition with a lift of 120kg.

Gold medal favourite Hubbard, the first transgender athlete to compete at the Games, said she thought she may have ruptured a ligament in her elbow.

"I have no regrets about the attempts that I made because I believe that to be true to sport, you really have to try to be the best that you can. I'm happy with the decisions that were made," she said.

"It wouldn't be true if I said I wasn't unhappy at the moment but the nature of sport means that things don't always go your way and it is what it is," added Hubbard.

Hubbard's presence had been criticised by some officials from rival countries but she received a huge roar of support from the crowd when the athletes were introduced.

"I think you have to be true to yourself and I hope in this case that's what I've done," said the New Zealander.

Born Gavin Hubbard, she represented New Zealand in male weightlifting events before transitioning to female in her 30s.

"The crowd was absolutely magnificent. I felt (it was) just like a big embrace and I wanted to give them something that reflected the best I could do, and my only real regret today was that I was unable to show them," Hubbard said.

Samoa's Feagaiga Stowers, second behind Hubbard before the Kiwi's injury, took gold with a total lift of 253kg.

According to reports, Samoan coach Jerry Wallwork earlier took issue with Hubbard, saying she had an unfair advantage and adding: "A man is a man and a woman is a woman."

Asked whether she had been anxious about getting a rough reception at the Games in Gold Coast, Hubbard said: "It would be untrue to say that the thought never crossed my mind.

"But there's no indication at all today that they were anything other than absolutely fantastic, a real credit to the Australian people and also the broader sporting community."

She added: "The one saving grace in all of this is that I'm not in any great pain at the moment. I'm sure that will come with time."

Hubbard became eligible to compete as a woman after showing testosterone levels below the threshold required by the International Olympic Committee.

"It's very, very clear that Laurel is eligible to compete as a woman in accordance with the existing rules and we respect that right for her to compete," Games chief executive David Grevemberg said earlier.//AFP