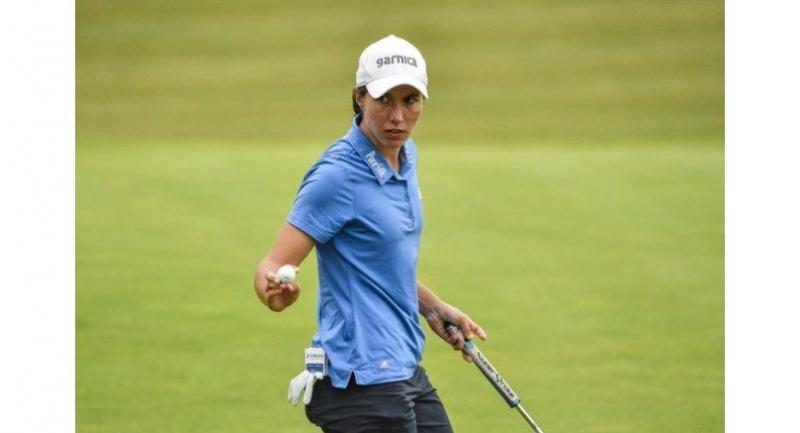 Carlota Ciganda of Spain gestures during round four of the Shanghai LPGA golf tournament in Shanghai on October 20, 2018.

Carlota Ciganda fired herself into the joint lead with Kim Sei-young of South Korea thanks to a late flourish at the Buick LPGA Shanghai on Saturday, with one round left.

The Spaniard tops the leaderboard with overnight leader Kim on 11-under 205 following her blemish-free 67 at an overcast Qizhong Garden Golf Club.

In tied third, a shot off the summit, is Thailand's world number two Ariya Jutanugarn and a trio of Americans -- Danielle Kang, who was celebrating her 26th birthday, Brittany Altomare and Angel Yin.

China's Liu Yu is a further shot back on nine under going into the final round, which promises to be a cracker with so many players fighting for contention.

"I'm really happy with this round, especially no bogeys, that was very good," said Ciganda, who is going after a hat-trick of LPGA crowns and made birdies in three of her last four holes to roar into the shared lead.

"I've been playing good the last two weeks, in Korea last week (finished tied 11th) and this week too. Gave myself lots of birdie chances and I'm happy where I am."

Kim began her third round in sparkling form, draining three birdies to extend her lead.

But she stuttered on holes seven and eight, carding two bogeys on the bounce, and was slowly reined in by a pack headed by the 28-year-old Ciganda.

Altomare, who is gunning for her first LPGA win, briefly surged to the head of the leaderboard, before falling back with a double bogey at the par-four 15th hole.

Kim hit trouble on the 17th, dropping a shot as she struck out into the water, ramming her club into her bag in anger and eventually carding a one-under-par 71.

"I don't know, I feel it wasn't comfortable, so I try to figure out what's the problem."