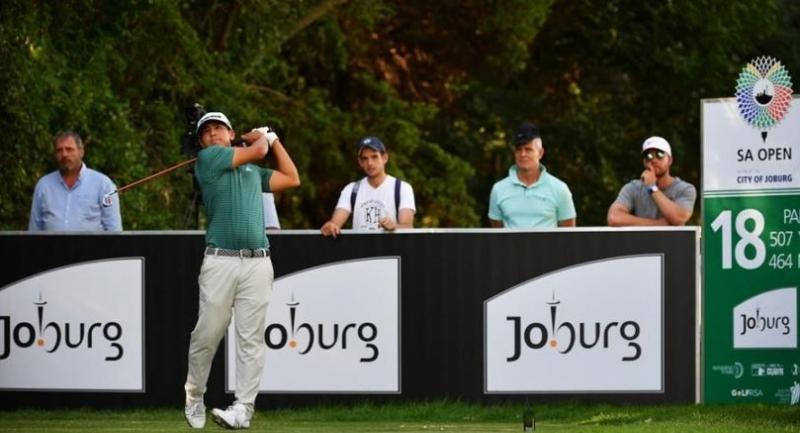 Kurt Kitayama of the United States

Johannesburg -  Kurt Kitayama of the United States continued to ride on his rich vein of form by firing a flawless eight-under-par 63 to trail first round leader Louis Oosthuizen of South Africa by one shot at the South African Open hosted by the City of Joburg on Thursday.

Fresh from his breakthrough in Mauritius last week, the 25-year-old Asian Tour Qualifying School graduate was again in his element as he marked his card with six birdies and one eagle to share second place with Zambia’s Madalitso Muthiya at the Randpark Golf Club.

“It was nice to continue that run from last week. I made a nice long putt on the first and got off to a really hot start. I was four-under through five  and then was kind of in cruise control a little bit, and then the eagle on 14 was nice to get it going again. I could’ve made a few more putts in the middle of the round.  I had some good looks but they just didn’t fall.

“I played well last week in Mauritius and am just kind of riding that momentum. The putter has been really good so far and I’ve just got to continue keeping the confidence up,” said Kitayama.

Home favourite Oosthuizen remains the man to catch after he returned with a 62 to set the early pace. The 2010 Open Championship winner is looking to win his national open for the first time and put up a performance befitting of his status as the highest-ranked player in the field this week.

“Anytime, anywhere, nine-under is always going to feel nice. It was one of those rounds where you don’t really look at any scoreboard or your card, you just play. "I drove it really well and gave myself good opportunities to hit it close and I’m putting nicely, so it was just birdie after birdie. I’m pleased to be in the lead, but there’s a long way to go,” said the South African.

Brazil’s Adilson Da Silva, who won his maiden Asian Tour title in Chinese Taipei in September, opened his account with a 66 to share eighth place with eight other players that also include South Africa's Ernie Els.

South Africa’s Justin Harding meanwhile signed for a 69 to trail Oosthuizen by seven shots in tied-46th place. Harding, who is currently placed third on the Habitat for Humanity Standings, needs a win this week to stand any chance of topping the money list as the Asian Tour season draws to a close in Jakarta next week.

The South African Open hosted by the City of Joburg is part of The Open Qualifying Series for the 148th Open at Royal Portrush. Spots are given to the leading three players (not otherwise exempt) who finish in the top 10 and ties.