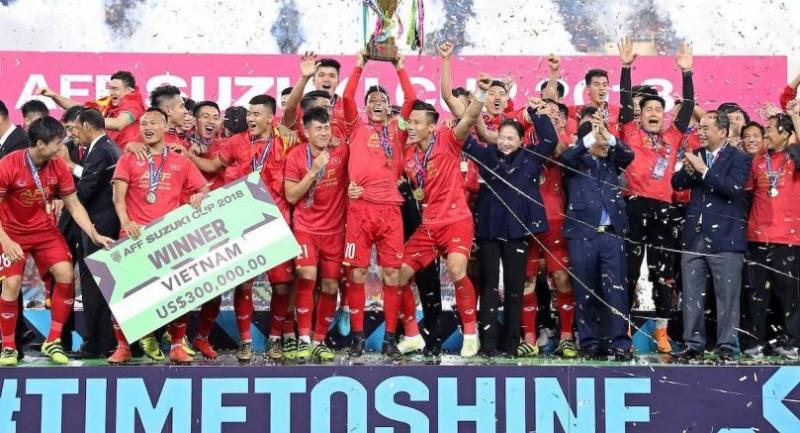 An early goal by Nguyen Anh Duc proved decisive as Vietnam beat Malaysia 1-0 at My Dinh National Stadium on Saturday to lift the AFF Suzuki Cup for the second time.

The Vietnamese had allowed a two-goal lead to slip in a 2-2 draw in the first leg in Kuala Lumpur last Tuesday but Anh Duc restored their advantage when he volleyed home from close range after only six minutes.

Goalkeeper Dang Van Lam made a series of fine saves to preserve the home side's advantage as they won 3-2 on aggregate and claimed the ASEAN regional title for the first time since 2008.

Vietnam had the benefit of two away goals from the first leg and they made an excellent start in Hanoi, taking the lead when Nguyen Quang Hai’s chip from the left found Anh Duc, whose left-footed volley was too powerful for goalkeeper Farizal Marlias to keep out of his net.

Mohamadou Sumareh went close to levelling for Malaysia in the 11th minute with a clever back-heel which went narrowly wide, while Do Hung Dung should have done better for the hosts in the 33rd minute after he received the ball unmarked on the edge of the box but shot wastefully wide.

Van Lam was called into action just before half-time to tip Syahmi Safari's first-time effort over his crossbar and he showed fine reflexes again early in the second to bat Sumareh's header clear before making another fine save to keep out Safawi Rasid's free-kick.

Ten players –- six Vietnamese and four Malaysians –- were booked in the scrappy encounter which culminated in the dismissal of Shahrul Saad in stoppage time when he received his second yellow card after committing a foul on the halfway line to snuff out a Vietnamese counter-attack.