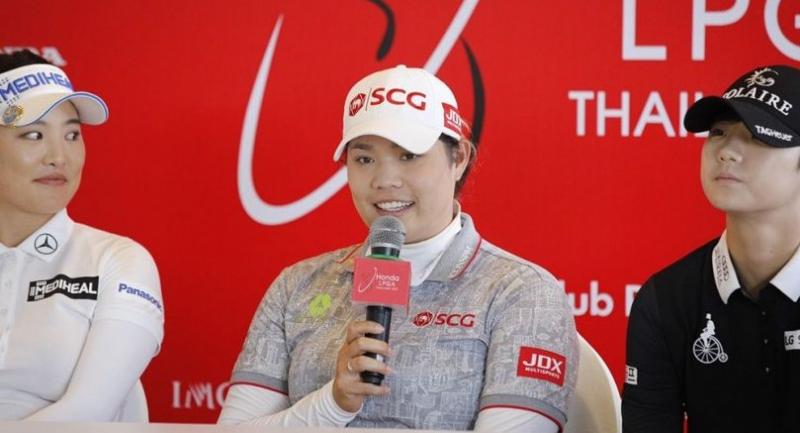 Reigning World No. 1 Ariya Jutanugarn undoubtedly amazes fans at every stop of the LPGA Tour around the world but her trip back to Thailand, her home, is one destination that is near and dear to her heart.

Making her third start of the 2019 season, Jutanugarn feels the unfaltering support at Siam Country Club Pattaya and hopes to provide her fans with a great performance.

“I'm going to say I always love being back here because all of the fans here, they give the best support ever,” said Jutanugarn who is making her eleventh career appearance at the Honda LPGA Thailand. “Every time I still get nervous, every time because there are so many fans coming to cheer for me. So there’s are a little extra expectations, but I'm hoping to do my best every week.”

Jutanugarn couldn’t name just one thing that makes the week at home special for her but the 10-time LPGA Tour champion was not shy about sharing where her focus lies outside the golf course.

“To be honest, I love the food here, so I’m going out and keep having good food all the time.” Her favorite Thai dish? “I would go with fried fish with fish sauce. That’s my favorite ever. I love that one.”

Jutanugarn will tee off at 9:50 a.m. on No. 1 with 2016 Honda LPGA Thailand winner Lexi Thompson and 2018 Louise Suggs Rolex Rookie of the Year Jin Young Ko.

While Ariya Jutanugarn and Minjee Lee jump-started their season with two events already on record, Republic of Korea’s So Yeon Ryu and Sung Hyun Park are both making their season debut in the Land of Smiles.

“I feel really great to be here,” said Ryu who had a runner-up finish at the 2017 Honda LPGA Thailand. “I’m really happy to be back to the road and looking forward to meeting a lot of Thai fans this week.”

For Park, spending several “golf-free” weeks to travel without picking up any clubs was the key to mentally prepare for a strong start to her third season on the LPGA Tour.

“Last year, I felt a little uncomfortable with my game at the beginning of the season and also felt a lot of pressure,” said the world No. 2, who finished T22 at Siam C.C. last year. “This year I'd just like to get comfortable. So that's what’s going to be different this season-just staying comfortable throughout the season.”

Ever since 2019 LPGA Tour rookie Pajaree Anannarukarn started playing golf, she looked up to the Jutanugarn sisters as role models and made it her life goal to make it to the LPGA Tour, just like her heroes have done. Anannarukarn will make her LPGA Tour debut as a professional, playing with American Emma Talley and Republic of Korea’s Hyo Joo Kim in Round 1 of the Honda LPGA Thailand.

“I’ve been coming here to the tournament and watching them play, ever since I started playing golf when I was eight or nine years old,” said the 19-year-old from Bangkok, Thailand. “I was very inspired because they were still young and playing as professionals. They were my inspiration and that’s what motivated me and now I get to play with them, so it’s very special.”

In 2018, Anannarukarn played a full season on the Symetra Tour with four top-10 finishes and placed T39 at the inaugural LPGA Q-series, locking up her LPGA Tour card for the 2019 season.

“I feel very lucky that this day has come. I’m very excited because even though it’s my second time playing in the Honda LPGA Thailand, it’s more special because it’s the first as a pro LPGA player. Playing on the LPGA Tour is like a dream come true so I’m looking forward to having a great year out her.”

The AXA XL LPGA Volunteer Service Award is a program launched in 2018 to recognize exemplary volunteers at each LPGA tournament. Pimpichakorn Phooin, or known by her nickname “Film,” is this week’s award recipient. Film has served as a standout volunteer as the transportation and information desk attendant and after two consecutive years of service at the Honda LPGA Thailand, she has become a member of the volunteer staffing team due to her enthusiasm for the LGPA and her tireless work ethic.

Tags:
THERES NO PLACE LIKE HOME FOR NO. 1 ARIYA JUTANUGARN No place