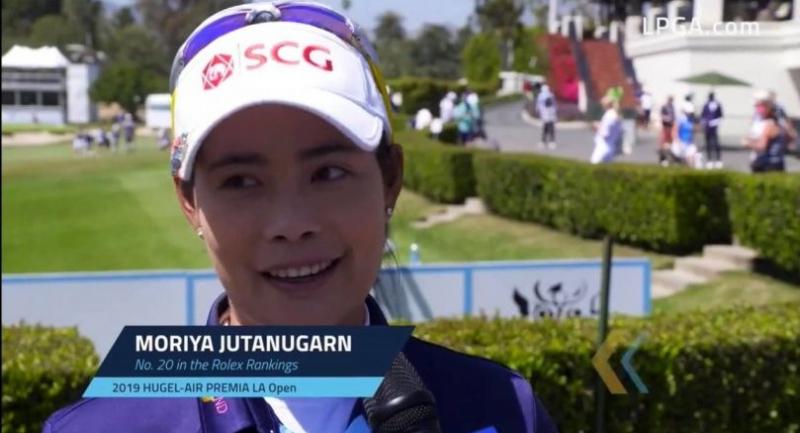 This week’s HUGEL-AIR PREMIA LA Open marks the first time that Moriya Jutanugarn will defend an LPGA Tour title. In 2018, the Thai star broke out of younger sister Ariya’s shadow to capture her first title since joining the Tour in 2013.

Wilshire and its spectacular views of the Hollywood Hills made for a scenic backdrop to Jutanugarn’s first win. But in the hunt for her second win, she says that she just can’t bring herself to play favorites with any hole here – or any course, for that matter.

“You have to like every golf course you go and play, and just you can't really say like it doesn't fit my game or it really fits my game. You just have to deal with it,” said Jutanugarn, who has five top-15 finishes so far in 2019. “That's what I learn from golf, is just you can't just go and say you don't like it. You just have to take action, whatever you have, whatever it is right now.”

There is already precedent in 2019 for a successful title defense. Just last week in Hawaii, Brooke Henderson won her second consecutive LOTTE Championship.

The season-long Aon Risk Reward Challenge will highlight the world’s best professional golfers as they tackle the most strategically challenging holes across both the LPGA Tour and PGA TOUR schedules. The player from each Tour on top of the Aon leaderboard at the end of the regular season will receive a $1 million prize. The scoring system is identical on both the LPGA Tour and PGA TOUR, and players will take their best two scores from each Aon Risk Reward Challenge hole, with the winners having the best average score to par at the end of the season. Players must play a minimum of 40 rounds throughout the season. The Challenge runs across regular season tournaments (29 LPGA Tour; 36 PGA TOUR).

The designated Aon Risk Reward Challenge hole at the HUGEL-AIR PREMIA LA Open is the 15th. This par 5 gives a player the chance to go for the green in two but she needs to balance the risk with the reward and navigate the 14 bunkers that protect this hole. A bunker down the right side of the fairway requires a carry of 240 yards so an accurate drive is essential here. The green is protected by a deep creek in front that also wraps around the back so club selection is important, especially when the pin is cut front right or back left.

Bruce Bennett has served as part of the Volunteer Services Committee for both HUGEL-AIR PREMIA LA Opens. According to tournament officials, he volunteers all week and is a friendly face for all the volunteers as they check in. Bruce has volunteered at many sporting and philanthropic events in the greater Los Angeles area, and calls Dottie Pepper his favorite player. The tournament is proud to recognize Bruce as an outstanding volunteer from the HUGEL-AIR PREMIA LA Open for the 2019 AXA LPGA Volunteer Service Award.