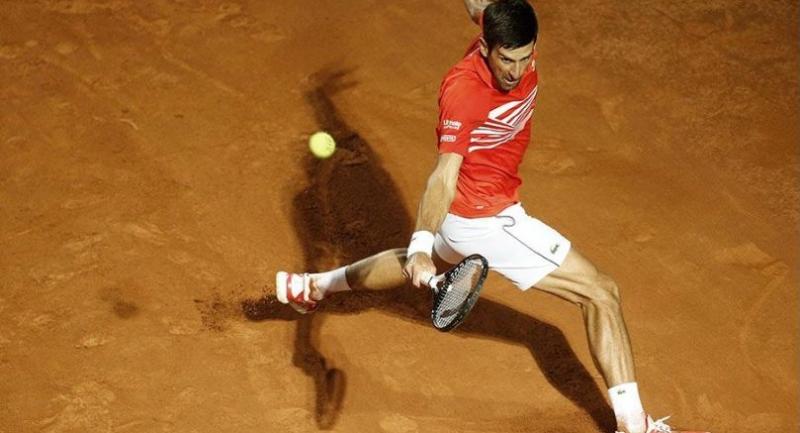 Novak Djokovic of Serbia in action against Diego Schwartzman of Argentina. / EPA

Novak Djokovic said he was relishing locking horns with his "greatest rival" Rafael Nadal as the pair set up the 54th clash of their careers Saturday in the Italian Open final. "It's the ultimate challenge," said the Serbian world number one of playing second-ranked Nadal.

"I've had so many matches against him. Up to date, we had the longest rivalry of tennis of all time. Every time we get to play each other, it's a thrill."

Djokovic -- winner at the Madrid Open last weekend -- has had to battle through his last two matches in Rome.

The 31-year-old won through in 2hr 31min against 24th-ranked Schwartzman, having saved two match points over three hours on Friday night against Juan Martin Del Potro.

But Nadal, a 17-time Grand Slam winner, has not dropped a set all week en route to an 11th Rome final.

"He's one of the greatest champions this game has ever seen," said 15-time Grand Slam champion Djokovic.

"His mentality, his approach, his resilience, ability to fight back after long absence from the tour, injuries, surgeries, he's had it all.

"He keeps on showing to the world why he's one of the biggest legends of tennis history. I have greatest respect for him. He's my greatest rival of all time, for sure."

The only time eight-time Rome winner Nadal has lost on the red clay of the Foro Italico has been to four-time winner Djokovic.

The pair who have meet four times in the Rome final and are 2-2 in previous meetings while Djokovic leads their career rivalry 28-25.

Nadal, seeded second, was playing his fourth straight semi-final, but had not managed to go further on clay this season.

The 32-year-old had been stunned by Tsitsipas, seeded eighth and 12 years his junior, in the semi-finals at the Madrid Open last weekend.

But the Spaniard was clinical on the red clay of the Foro Italico, winning through in 1hr 42min to reach the final for the 11th time.

"It's an important victory for me," said Nadal.

"Last week I didn't play very well in Madrid. Today I did better.

"For me tomorrow is an opportunity to play against a good player, a great player.

"Is another test. I hope to be ready to compete well. Going to be a tough one."

Nadal's run to the Rome final comes just a week before he starts his assault on a 12th French Open title at Roland Garros.

"The feeling is that I am playing better every week, every day. That's important for me," he said.

"It's not a drama to lose in semi-finals. The main thing is recover my level.

"I've been through some tough moments after Indian Wells. Recovery of the knee again... was not easy to come back and to prepare myself the right way."

Tsitsipas, meanwhile, who lost the Madrid final to Djokovic, was at a loss to explain his performance as he fell to his fourth defeat in five matches against Nadal.

"I'm just trying to realise what I did wrong," said Tsitsipas, "because, I mean, it was just one break in each set, if I'm not wrong."

Fellow Greek Maria Sakkari's run was also halted in the women's tournament as she fell 6-4, 6-4 to Czech fourth seed Karolina Pliskova in 88 minutes.

Sakkari, a 39th-ranked Rome qualifier, had won her first WTA title on clay at the Moroccan Open when she beat Britain's Johanna Konta.

Konta, ranked 42, fought back from a set down to seal victory on her fourth match point against Madrid Open winner Kiki Bertens 5-7, 7-5, 6-2 after almost three hours to set-up a Sunday final clash with Pliskova.

Tags:
The ultimate challenge: Djokovic to meet Nadal for 54th time with Rome title at stake The ultimate