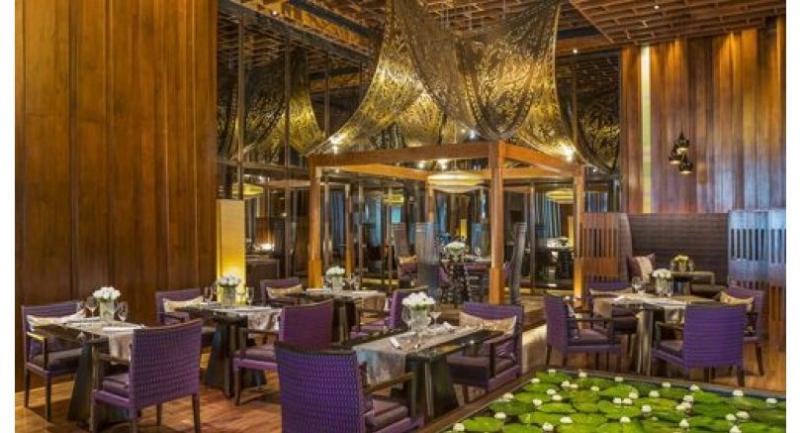 Sra Bua by Kiin Kiin, the popular fine-dining modern-Thai restaurant at the Siam Kempinski Hotel Bangkok, has been awarded a Michelin star, it was announced last week at the launch of the Michelin Guide Bangkok in the hotel’s Chadra Ballroom.

“It is the ultimate honour to be awarded a Michelin star,” said Chayawee Sutcharitchan, head chef at Sra Bua. “I’m very proud of my team. Since beginning our amazing culinary journey in 2010, we’ve worked hard to create and present outstanding modern Thai cuisine to local and foreign guests. This is the proudest moment of our lives.” “Henrik understands the significance of this award, since his restaurant in Copenhagen has enjoyed Michelin-star status since 2008. This is well-deserved recognition for a restaurant that provides the highest standards in fine dining.”

Chayawee, known as “Chef Berm”, fell in love with gastronomy in 2004 while working in the United States. He obtained a certificate in culinary arts at Collin County Community College, basically leaving behind the training he had in computer science from Texas A&M University.

In 2006 Chayawee returned to Bangkok, where he gained more experience and developed his culinary skills at several five-star hotels, including the Landmark in Bangkok (where he was chef de partie) and the Intercontinental Bangkok (he was junior sous chef).

Chayawee joined the Siam Kempinski in 2010 as sous chef at the Brasserie Europa. Two years later he moved to Sra Bua and within another two years was named head chef.

“Cooking is certainly my passion, and learning new techniques and implementing them to create our dishes is always fun,” he says.

“The gastronomy trend has changed rapidly these last few years, and you can never stop learning or seeking out new things. Nowadays, a dining experience is not just about the food itself – it first has to appeal to the eye of the diner, along with its scent and taste.

“Also important are the ambience of the restaurant and the service. Never forget that the consistency of the food and the presentation are also important. Thankfully, my knowledge in computer science helped in terms of scaling the ingredients and plating.”