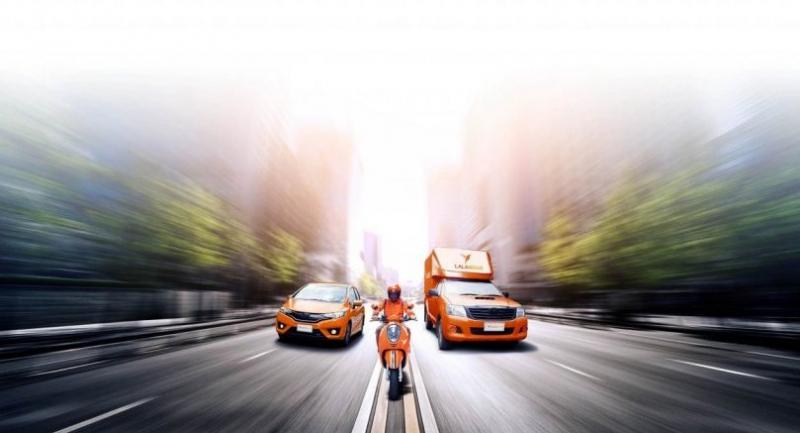 No easy RIDE for road warriors

Grab,GOJEK and Lalamove fight for market share in an evolving transport and shopping digital environment

Thailand is one of the markets with the highest growth potential in the region for ride-hailing and on-demand food delivery businesses as Singapore-based Grab, the  GET app backed by Indonesia’s Gojek, and Hong Kong-based Lalamove fight intensely to gain market share in the Kingdom.

Grab: from ride hailing to super app
Launched as a ride-hailing service, Grab has grown to become Southeast Asia’s “decacorn”, a startup valued at over US$10 billion as it transforms into a super app for people’s everyday lives. It now offers not only on-demand transport but on-demand food and service delivery in 336 cities in eight countries including Thailand. In Thailand, Grab’s service is available in 18 cities within 16 provinces.
Grab boasts 9 million drivers and merchants across Southeast Asia, and the platform has been downloaded 144 million times, with about half of that number accounted for by Thailand.
Tarin Thaniyavarn, country head of Grab Thailand, said the platform serves the daily needs of Thai people. At the first quarter of 2019, the company had grown 17 times over the same period in 2018, and is committed to continue its rapid growth, said Tarin. The star performers are the ride-hailing and food delivery services.
The Thai market potential has so far been limited by transport regulations. If those limitations were unlocked, the growth of the ride-hailing sector in Thailand would be dramatically increased, said Tarin.
After six years in the Thai market, Grab’s current strategy is to market its on-demand transport service as a platform for tourists. The company successfully trialled the service in Buri Ram, and other provinces, last October during the MotoGP Buriram event. Some 200,000 tourists in the province travelled using Grab’s service.
“In Buri Ram, there are only 15 taxi vehicles, and 100,000 individual vehicles. Our solution was to help turn the existing [transport] infrastructure into a [transport] facility to serve tourists. During the trial period, 220 Grab vehicles helped transport 15,000 tourists over a week-long period and helped create transport spending of around Bt600,000,” said Tarin.
He said the project’s success will serve as a model approach for other tourism cities throughout Thailand, helping create economic benefits for the local cities and distribute the income to local people. This model is to help create economic for local cities and diffuse the income to local people. Meanwhile, tourists will get peace of mind from a secure service, standard prices and convenient payment that comes with the standard ride-hailing service.
“We will bring this model to negotiations with the government. This model addresses traffic problems in the city, diffuses revenue to local people and facilitates tourists [visiting] cities across the country. Tourism contributes around one-fifth of the country’s gross domestic product (GDP) each year. We will expand this model in 16 cities in eight provinces [where we have] service footprints,” said Tarin.
He said the company is resisted in Thailand, despite having contributed to the country through paying income tax, having collaborative projects with the government such as a co-marketing campaign to promote tourism in emerging provinces with the Tourism Authority of Thailand (TAT), and collaborating with the local government administrations in Buri Ram to offer on-demand transport during the MotoGP Buriram event.
Under the super app concept, Tarin said, Grab has moved beyond on-demand transportation to also emphasise its on-demand delivery services for food, groceries, and parcel delivery. Thais place around 10 million orders monthly for all kinds of Grab service.
Grab Food, an on-demand food delivery service, has become the rising star business for Grab Thailand with 40-times growth in 2018. It received more than 3 million orders and completed transactions last year.
“We piloted Grab Food in 2017 before official launching it in 2018, and became the market leader in the third quarter of last year. In the first quarter of 2019, we also surged in our growth. In only one week during the Chinese New Year in 2018 in Thailand we delivered 800,000 dishes to people,” said Tarin.
The company partnered with Central Group to expand its Grab Food merchant base and to offer a multi-stop food ordering service with Central Restaurant Group. Currently, Grab Food is available in only Bangkok, Chiang Mai and Khon Kaen, but this year it will expand its on-demand food delivery service to at least another six cities in its footprint. It also plans to offer new service innovations such as Grab Kitchen, scheduled to roll out in the third quarter of this year. It aims to expand collaboration across food-supply chains to strengthen the food delivery ecosystem.
Additionally, Grab Express, an on-demand parcel delivery service, launched in July 2018, and is growing as e-commerce and on-demand logistics services become increasingly popular. Meanwhile, the Grab Pay payment and financial services, a joint investment between Grab and Kasikornbank, and Grab Reward, a customer relationship management (CRM) platform, are also on track to expand this year.

Aggressive investment
Region-wide, the company plans a rapid expansion throughout Southeast Asia and has announced plans to raise US$6.5 billion (Bt206.6 billion) in capital by the end of this year. Grab will also seek to invest aggressively, with a commitment to make at least six investments or acquisitions across the region in 2019.
Underpinning Grab’s growth is the backing of SoftBank and other key strategic investors who have put in over $4.5 billion in Grab’s current Series H round. Last month, Grab secured a $1.46 billion investment from the SoftBank Vision Fund. Grab’s partnership with SoftBank runs deep, and the two companies have been working together since 2014.
Anthony Tan, Grab’s co-founder and CEO, said that the support from strategic investors like SoftBank and others, will allow Grab to grow very aggressively this year across verticals of payments, transport and food.
“At our current growth rates, we expect to be four times bigger than our closest competitor in Indonesia and across the region by the end of the year. As we grow to become the leading super app in Southeast Asia, we see massive opportunities to expand our business and continue to serve our customers, driver-partners and merchants across Southeast Asia,” said Tan.
Grab president Ming Maa said that among other key markets, Indonesia in particular will see Grab invest a significant portion of fresh proceeds. Grab’s Indonesian business is expanding rapidly, with revenue more than doubling in 2018. GrabFood is experience rapid growth in that nation, operating in 178 Indonesian cities, up from 13 at the start of last year, and with delivery volumes growing almost 10 times in 2018.
“In line with the tremendous transformation that Southeast Asia is currently undergoing, the opportunity is ripe for us to further grow in domains like healthcare and financial services among others. We are set to make at least six investments or acquisitions this year, and raise $6.5 billion in total capital by the end of the year,” said Maa.

GET: a second choice for super app
GET is an on-demand multi-service application developed for Thailand, driven by a Thai founding team and backed by Gojek’s technology, expertise and investment. GET provides a range of services, including on-demand transportation (GET Win), food delivery (GET Food), parcels (GET Delivery) and financial services (GET Pay).
Pinya Nittayakasetwat, co-founder and chief executive officer of GET, said it is expanding services to cover all of Bangkok’s districts in response to growing demand. GET will soon be operating in all 50 districts in Bangkok, offering GET Win, GET Food and GET Delivery. GET officially launched its services in February and after just one month, the company saw 65-per-cent growth in user numbers, with the total number of its app downloads exceeding 300,000.
“We are a super app, we offer a platform to users that includes food, messenger, transportation, and payment,” sums up Pinya.
GET is continuing to improve its service quality, including tweaks to service speed and price. Currently, more than 10,000 drivers are registered on the GET platform.
GET was founded with the goal of using technology to improve people’s lives in Thailand, by providing access to products and services, creating more value for society by promoting efficiency and productivity, and improving financial inclusion.
GET aims to offer a choice that benefits Thai consumers. Users have more choices and that has forced GET’s rivals to improve their quality of service and reduce their prices.
The ride-hailing penetration rate in Thailand is only 3.6 per cent of the total population, while food delivery is only 1.6 per cent. Other Southeast Asian countries – Singapore, Indonesia, Vietnam, the Philippines and Malaysia – have double-digit penetration. Taiwan has 60 per cent penetration in food delivery. For Thailand, it is expected to grow to double-digit participation.
There are two key reasons for the adoption lag in Thailand. The first issue is that government regulations are not yet open to ride-hailing; the second is that Thais have more specialised needs that require innovation in food delivery services.
“Thailand remains a market with a lot of room to grow, and the competition is good for the market and for consumers and the supply chain and government,” said Pinya.
In Thailand, only middle- to upper-income people can order food via apps due to the need to pay a Bt60 delivery service fee. GET’s mission is to offer innovation in food delivery service in order to lower that price point to reach the larger market of lower-income people and to let them to