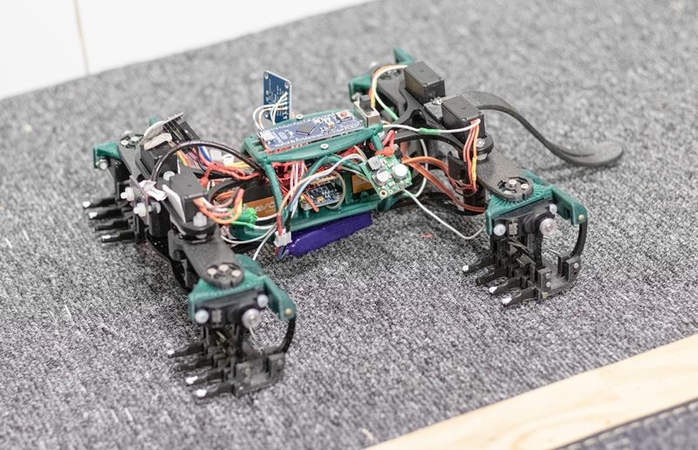 Robotic lizards may play a role in the future of disaster surveillance, researchers imagine

Researchers have created a robotic lizard that can scale vertical walls just like the actual animal.

While Boston Dynamics and other robotics firms have risen to prominence with agile, dog-like animatronics for disaster zones, scientists at the University of the Sunshine Coast in Australia focused their attention on a species of reptiles that can snake into places others can't go.

Smaller, lighter-weight and simpler to build than machine versions of many other animals, lizards have perfected how to crawl vertically, making them an ideal base for future surveillance machines, Christofer Clemente said, the university's team supervisor who has been developing robotic reptiles since 2017.

"A lizard is a really good place to start because they find one of the optimal climbing configurations. A lot of the time, nature has solved the problems for us," Clemente said.

The team named their latest invention X-4 and published a scientific paper on their findings on Thursday.

Robots have been able to climb stairs and travel up hills for years, but sticking to and traveling up 90-degree surfaces presents a unique set of challenges. It requires the perfect amount of speed, stability, weight and efficiency, along with the ability to grip surfaces without getting stuck to them.

To figure out how the reptiles do this, the team captured two lizard species and filmed them walking. Geckos were recorded walking across a plastic vertical racetrack while Australian water dragons were filmed slithering across a specialized carpet.

The researchers used software to track the animals' foot placement and how their bodies moved before constructing a clawed robot that mimics the same patterns.

One of their key findings was that lizards have an optimal range for dynamic stability, meaning their speed can affect how successful they are at climbing.

The findings informed how fast the robot would need to move to keep it on the wall.

The university researchers built an agile contraption about the size of an average climbing lizard. The machine is nine inches long, weighs under a half-pound, and has legs and feet designed to mimic the way climbing lizards move. It is built primarily from 3-D-printed parts, with joints at the spine so it can slither and joints at the shoulders so its feet can move backward and forward. The feet have pushpins for claws, allowing them to grip into surfaces and release with ease.

The researchers added a range finder and a Wi-Fi sensor so the robot can avoid obstructions. A passive tail helps keep the robot stable. During testing, the climbing robot was filmed on a 90-degree carpeted surface. When operating at a medium speed, it stayed on the wall.

These days, it blindly crawls up walls until it gets close to the ceiling, at which point it is programmed to stop, the researchers said. They hope to add a camera and enhanced autonomy next. It remains a prototype that they imagine could make for a good communications robot. Perhaps it could climb trees and telephone poles to extend the range of Wi-Fi networks. They also suspect that it would do well in search-and-rescue scenarios.

"In a disaster zone, you could send these robots in, and they can just crawl around the structure and look for survivors," Clemente said. "If anyone has a mobile phone, they can connect to the robot and send out a ping of their location."