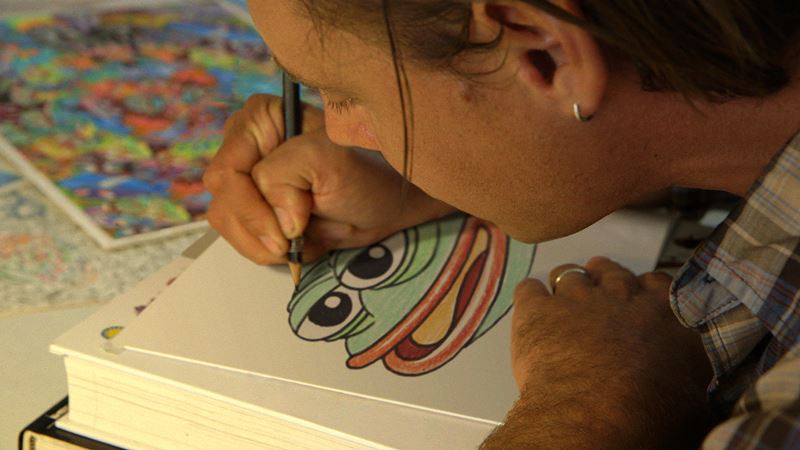 Matt Furie is a patient man. After many on the internet co-opted his most famous cartoon creation more than a decade ago, he was long willing to live and let live. And when his same Pepe the Frog character popped up on the forefront on the crypto-art scene about five years ago, Furie watched from the sidelines and waited.

Now, he's moving fully into the world of NFTs and their experimental possibilities.

Last month, an image of Pepe - the first authentic crypto-art of Furie's iconic character - sold at auction for about $1 million. And the artist is planning to unveil a universe of collectible NFT characters - some of them his latest takes on Pepe.

To Furie, the NFT realm is about more than coin. During the era of Donald Trump, extremist social media users adapted Pepe so often that the Anti-Defamation League deemed it a hate symbol. But the exploding world of crypto-art is allowing the cartoonist to reclaim a character who was never meant to stand for much beyond love, peace, hedonism and altered-state chillaxin'.

"The NFT world is new, and there are a lot of optimistic people creating cool things," Furie says of his interest in exploring non-fungible tokens - unique digital files whose origins and ownership can be verified. "Pepe does not have the baggage here that he does in the 'real world,' and I like working with utopians and optimistic freethinkers. There are so many possibilities."

Furie became intrigued when his cousin Frank Musarra, a Brooklyn-based multimedia artist, contacted him in February with an invitation to show his work on Chain/Saw, a new online gallery of crypto-art featuring like-minded creators. Musarra envisioned a "middle ground between crypto-utopian zealotry and grouchy anti-tech naysayers."

They soon were on a Zoom call with dozens of fellow artists, kicking around ideas about just what the site would look like. Furie embraced the opportunity to show the world he was much more than the Pepe Guy. Yet as the site's April launch neared, Furie and Musarra, the site's official founder, knew something was missing. "We both felt pressure to show a Pepe NFT," says Furie, who's based in Southern California.

The cartoonist found a scan of the original 2006 "Boy's Club" comic art in which Pepe utters his catchphrase, "Feels good man" - the panels that launched countless memes across online forums and platforms.

In an April auction, Furie put a digital token of the art up for sale as "Pepe the Frog NFT Genesis." The winner was a prolific but secretive collector who goes only by the handle "punk4156." The top bid: 420 in Ethereum currency for the stoner frog, as recorded on the OpenSea marketplace - which converted at the time to about $1 million.

So why is ownership of a Furie art token called "1pantsdownpee.jpg" worth a million bucks? "It's my view that this will eventually be one of the most valuable digital originals in the world," punk4156 told Whitehot Magazine of Contemporary Art last month, noting that given how widely the Pepe image has been copied, the original "should rightfully be our generation's Mona Lisa."

This week, Furie is planning to unveil PEGZ - Pog-like digital portraits of his creature characters in 2-D, 3-D and animated form. "Everything else is a bootleg, and I'm very inspired by bootlegs in my life and in my art," he says - including Grateful Dead mix tapes - "but nothing beats the real thing."

Furie enters this world fascinated, too, by its sense of community - intrigued by how NFTs can "provide a tangible connection between a digital artwork and a collector who owns it."

Many people are minting their unique works as NFTs because blockchain technology - as a ledger of transactions across a network of computer systems - can now create a fixed digital record proving who owns each work. So creators are selling electronic tokens of everything from music to social media content - including the viral "Charlie Bit My Finger" video (which fetched $760,999 at auction) and Twitter chief executive Jack Dorsey's first tweet ($2.9 million).

"This new space is laying the groundwork for the Internet 3.0," Furie says. "In the future, you'll be able to trace memes back to their source."

And as Giorgio Angelini, writer-producer of the documentary "Feels Good Man," puts it: "Pepe is the ur-meme."

As chronicled in that film, Pepe has had many online lives: The anthropomorphic frog jumped from the panels of a relatively obscure comic about benign bro-creatures, transmogrified into a meme on the forums of 4chan and was posted on social media by such pop singers as Katy Perry and Nicki Minaj. But Pepe's image was also swiped by the alt-right and white supremacist groups and plunged into the political mainstream during the 2016 presidential election cycle, with Donald Trump Jr. sharing an image of Pepe among GOP figures, in a spoof movie poster titled "The Deplorables." In 2018, Furie sued Infowars host and conspiracy theorist Alex Jones over unauthorized use of Pepe; the case was settled the next year.

Yet in recent years, in the separate space of crypto-art, Pepe has played a prominent role while staying mostly free of such political associations. Collectors began trading fan-made memes, called Rare Pepes, and in 2016, a developer created the online platform Rare Pepe Wallet for buying, selling and exchanging them like trading cards. By early 2018, a first-of-its-kind live Rare Digital Art Festival was held in Manhattan, during which online marketer Peter Kell bought the "Homer Pepe" card - an NFT depicting Homer Simpson with a green Pepe-like face - for nearly $40,000. This year, Kell sold the NFT - once dubbed "the rarest Pepe" - for more than $300,000.

Then, in recent months, crypto-art started making mainstream news, as the works of such creators as Beeple began selling for millions. Furie increasingly received emails asking whether he would ever experiment in the blockchain space. He soon decided it was time: "I see a lot of folks out there juicing the market, so I thought I should squirt some of my own juice into the mix and see what happened."

"The NFT space allowed him to claim something that was his," Musarra says. "This is something that has evaded him for years, and this was a powerful thing."

Prominent NFT artist Matt Kane applauds the full Pepe progression as fitting: "Matt Furie created Pepe, which inspired Rare Pepes, which provided us the proof-of-concept on which the modern NFT scene became based. So for Matt to have had such a successful entrance to NFTs, it created a beautiful circle."

Early word about Furie's NFT work, though, faced some blowback; some critics pointed to research about the technology's eco-impact. Furie and Musarra say they have weighed reports on the energy consumption and carbon output of blockchain. "I hope that it will get cleaner," Furie says of the tech.

They concluded that "whether or not we participate, the blockchain is established as it is and it does not seem like it's going to disappear," says Musarra, who added, "There is much misinformation and confusion" about its true impact.

Chain/Saw is a marketplace for Furie's work, but it also spotlights a growing trove of inventive artists.

"I'm a fan of deformed, colorful, weirdo art, so his site resonates with me - it's genuinely experimental," Furie says. The first piece sold on Chain/Saw, "Colors of the Inside" by French 3-D artist Benjamin Lemoine, is a 14-second video clip of a masklike face being colorfully punctured from within. Musarra says Chain/Saw is planning to sell socially conscious art and work with such creatives as performance artist-musician Kembra Pfahler and prominent psychedelic artist Jen Stark.

Furie says this is just the beginning. Nodding to the psychedelic spirit of his Pepe comics, he embraces broad creative possibilities for digital art.

"We want to throw a rave in the metaverse for disco Pepes, lizards, tongue-waggling-whachamacallits, blobbies, gooies, pricklies and everyone," Furie says. "Viral media is inside of our heads, our subconscious. It never ends. It's best to make friends with the worms in our minds and to dance with them."