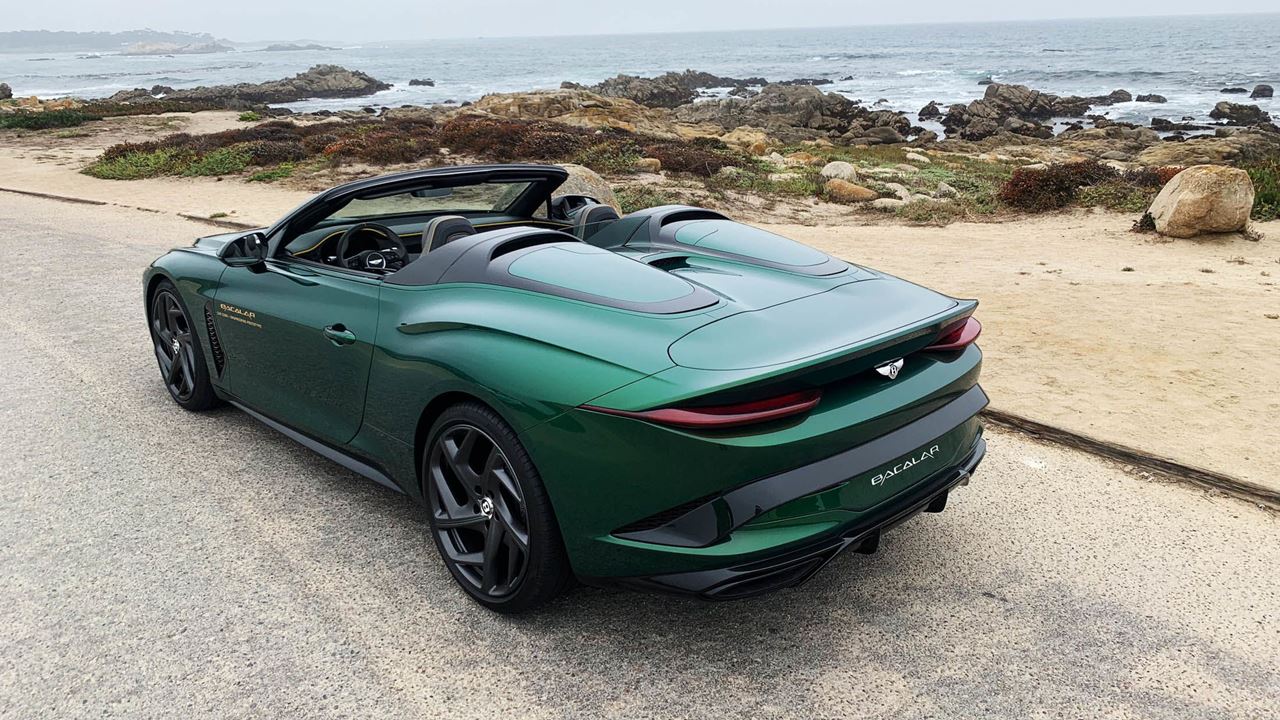 Test Drive: The $2 million Bacalar shows off the best of Bentley

If you want a Bentley Bacalar, youre too late.

Each of the 12 individuals worldwide who purchased the $2 million open-top two-seater has already spent many months developing personalized exterior paint schemes, unique tones for the Beluga leather seats, and detailed stitching patterns. The car, which was first announced in 2020, is built on the underpinnings of the Continental GT Speed Convertible but has a totally unique body-and is the first two-seat Bentley in nine decades.

It was built by the 40 artisans who at the brand's Mulliner program at its Crewe, England headquarters. As the first of its kind in Bentley's modern Mulliner operation, it is the crowning example of the kind of small-batch, highly specialized cars Mulliner aims to produce. Mulliner collections include classic models built anew, like the Bentley Blower continuation cars; extreme-luxury focused versions of existing cars from the Bentley model range; and 100% Coachbuilt cars like the Bacalar.

Bentley could have easily sold more than twice the amount it produced, Mike Rocco, Bentley's vice president for sales and operations, told me in Carmel, Calif.

Since the Bacalar and Bentley in general are in such high demand, won't Bentley increase the supply? Neither Rocco nor Timothy Hannig, the spokesman for the Mulliner department, would commit on the record to a definitive yes, but they didn't exactly say no, either.

It all made me eager to drive the thing. If more Bacalar-like Bentleys are coming down the pike, we will indeed need to know how they drive. Prospective clients and Anglophiles alike will want a taste.

I recently drove a "Scarab Green" Bacalar test car in along 17-Mile Drive, just a nine-iron shot away from the Pebble Beach Golf Links. (While 12 Bacalars were sold, 13 were made-I drove lucky number 13.) While it wasn't enough of a jaunt to do a proper review-the speed limit along that road is 25mph, and I cannot comment on any speeds that may or may not have been higher than that-it was enough to convince me this handsome Brit will more than fulfill its raison d'être as the perfect holiday coach built for two.

Please note: It doesn't come with a top-at all-and the compromised trunk will fit two small duffels, nothing more, so this is not daily driver material.

Bacalar comes with a 6-liter W12 engine that feels as powerful as a tank (650 bhp) and an active all-wheel-drive system that works with scalpel precision as it varies the torque split between front and rear wheels. The car uses rear-wheel drive as much as possible during normal driving for optimum efficiency and dynamic performance, but I never felt the switch.

Its carbon ceramic brakes and balanced contact with the road installed great confidence as I rolled through the deep fog of the peninsula, past hills of sea grass and oatmeal-colored sand.

Yes, it is based on the Continental GT Speed Convertible, but it has 100% unique body panels, sharing only the door handles with the GT, since those contain the hardware for keyless entry. The rear "Barchetta"-style clamshell and top deck of the Bacalar are crafted from lightweight aluminum; the doors and everything else on the body are made from carbon fiber.

Shared mechanics aside, the Bacalar felt far slinkier and more ethereal to drive than its Continental GT siblings. It felt quicker to jump to high speeds, more focused around corners, and more nuanced between gears-and the Continental GT is among the top three best all-around cars I have ever driven.

It also looks far more striking in person than it does in pictures. Some who saw it in person in Carmel or later on social media expressed surprise and curiosity about it, as if its announcement in March 2020 had completely passed them over, coronavirus notwithstanding. Some referred to the Bacalar-so named after a pristine lake in Mexico-as the "Bentley Balaclava" or "Bentley Baclava." Others had no idea about its origins at all.

Which is fine. Amid the endless procession of special-edition and limited versions of these hyperprofitable, upper-echelon conveyances, they tend to blend together. I also blame a certain quality about Bentley bodies that, especially in darker tones of paint, tends to present them more like bricks than they actually are.

Up close, where the eye can bend around its subtle corners, the Bacalar is a delight. Its double-bubble back and air vents along the hood and sides do just enough to rough up its otherwise stately and smooth Bentley body. The complex geometric stitching on the seats, the intense azure of the dashboard clock dial (colored to match the famous blue water of the white limestone-lined lake), the woolen bags placed so thoughtfully in their compartments behind the seats-they don't translate well in the highly modified glamour shots and renderings that seem to define automotive press photos these days.

No, the Bacalar reveals itself most fully in real life, not on virtual land. That's how it should be. If I could afford it, I'd buy it without hesitation. If you missed the first dozen, you're probably not completely out of luck. You may simply be early for the next round.