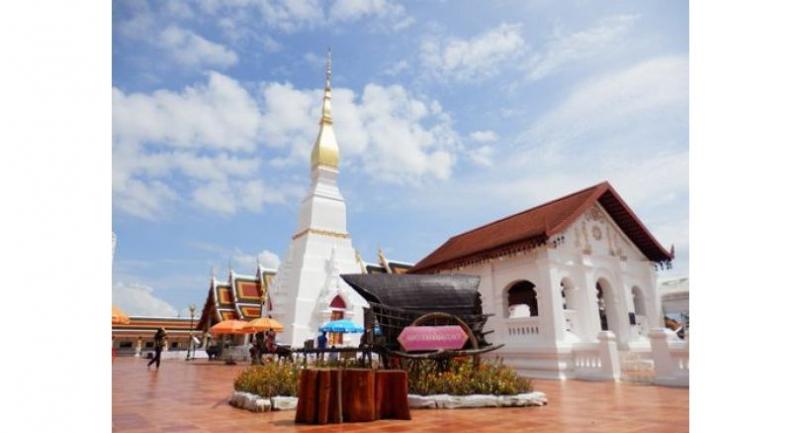 The Northeast province promotes its ancient temples, natural attractions and culture in a new tourism drive

The ancient town of Sakon Nakhon in Thailand’s Northeast is setting out to draw visitors with a new tourism campaign that plays with the sound “tham” in reference to dharma, thammachart (nature), and wattanatham (culture).

“These sum up Sakon Nakhon’s characteristics and identity,” says Noppadol Paitoon, vice governor of the province.
“This year, in line with Prime Minister General Prayut Chan-ocha ‘Thai Niyom Yangyuen’ sustainability project, we are supporting local residents in generating more income and drawing tourists’ attention to visit to our villages.”
Sakon Nakhon is one of three provinces – the other two are Nakhon Phanom and Mukdahan – being billed as “sanuk” or fun destinations for a vacation. Sakon Nakhon and Nakhon Phanom both have airports making access from Bangkok and elsewhere convenient, whether for a weekend break or a longer stay.\

“This ‘sanuk’ group is designed into a kind of a triangular tourist route, starting from Sakon Nakhon’s three districts Mueang Sakon Nakhon, Tao Ngoi and Khok Si Suphan and featuring the attractions of Phu Phan Ratchanivet Palace, Phu Phan Education Development Centre, Praya Tao Ngoi, which is the inspiration behind Jintara Poonlarp's ‘Tao Ngoi’, quality beef production, Ban Phutai and Phra That Choeng Chum. Making up the base of the triangle, Nakhon Phanom is a city that revels in the slow life and offers a range of cultural attractions along the Mekong River such as Paya Sri Satta Nakarat, while Mukdahan has its Indo-China Market. Many One Tambon, One Product (Otop) villages line the routes to those tourist destinations and also offer homestays,” he adds.

“In line with the government project, we are developing 54 villages in 14 districts into tourism destinations. We encourage the villagers to learn and practise folk performances, cook local foods and demonstrate their Otop goods to welcome tourists. Sakon Nakhon is well known for pha kram (indigo-dyed cotton), and is dubbed a ‘World Craft City for Natural Indigo’. We don’t want our products to be presented just twice a year at Muang Thong Thani because we have to eat everyday. So, these villages should be strong enough to attract hundreds of thousands of tourists to absorb the local way. We are also planning to set up a ‘talad pracharat’ (green market) where the villagers can take their products to sell,” says Noppadol.

Sakon Nakhon is well known among Thais for its five Buddhist pagodas, namely Phra That Choeng Chum, Phra That Dum, Phra That Phu Phek, Phra That Si Mongkol, and Phra That Narai Jeng Weng, as well for such highly revered monks as Man Phurithatto, Wan Uttamo and Fun Acaro.
Our first visit is to Phra That Choeng Chum – one of the most sacred pagodas in the country. This 24-metre-high, white and gold stupa, made of bricks and mortar, was constructed to protect the footprints of the four incarnations of Buddha and is located right in the centre of the city.

Slightly out of town is Phra That Narai Jeng Weng. Built in the Baphoun style of ancient Khmer art from sandstone on a laterite base, it features a lintel carved with the story of Lord Krishna killing the lion. History has it that the pagoda was entirely constructed by women who competed with the men who built Phra That Phu Pek.

Sakon Nakhon is also home to several interesting temples, among them Wat Tham Pha Daen, which preserves Lord Buddha’s footprint, and Wat Tham Phuang, renamed Wat Tham Apai Damrongtham, which is a series of temples in the park telling a story of the Gautama Buddha’s birth, enlightenment and death. The last temple representing nirvana features a magnificent statue of a reclining Buddha.

In terms of thammachart or nature, Sakon Nakhon has plenty to offer including Nong Han Lake, Somdet Phra Srinagarindra Park, Phu Phan Ratchaniwet Palace, and many stunning waterfalls and cliffs.
“The main target group in terms of visiting the lake through the ‘three tham’ campaign has been the elderly. But now we are turning to younger people and planning to attract them to the lake,” says Vice Governor Noppadol.

We take a longtail boat from the pier of Nong Han, the largest freshwater lake in the Northeast and sail towards Koh Don Sawan, which is home to a deserted temple and an abundance of flora and fauna. A popular spot for bird watching, it is best enjoyed from the wooden pathway that surrounds it.

The culture aspect of the “three thams” is centred on St Michael the Archangel Cathedral in Ban Tha Rae designed to resemble Noah’s Ark, as well indigo, and we are shown how to make an indigo-dyed handkerchief at Huean Nang Kram then stroll along Pha Kram Walking Street admiring the selection of indigo-dyed products as well as sampling the local cuisine.

“We are especially proud of our Wax Castle Festival, which this year runs from October 19 to 24. For this festival, we cooperate with every district as well as our neighbouring provinces for the parade on October 23. It will feature many cultural performances along the main street of the municipal district,” Noppadol says.