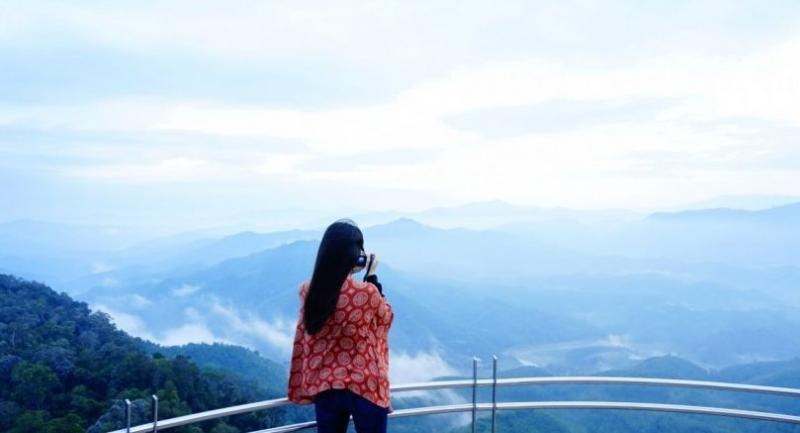 A sea of mist hangs over Aiyorweng district.

BORDERED TO the west, north and east by Pattani, Narathiwat and Songkhla and to the south by Malaysia, the landlocked province of Yala is a veritable showcase of Malay, Thai and Chinese culture.

The provincial capital, which is laid out like a spider’s web with a park at its centre, is the much-loved home of master craftsman Phiya Sawanpruk, owner of the Sri Yala Batik brand. In 2005, he converted his house, just 10 minutes away from Yala Railway Station, into an art studio and it is from here that he proudly presents his batik fashion garments and home furnishings. An artisan at Sri Yala Batik demonstrates her craft.

One of his proudest achievements is reviving an ancient fabric known as pa la nging. Once popular in Thailand’s three southernmost provinces, it’s a luxurious yok dok brocade silk with motifs of gold leaves and local flowers that merges tie-dying, printing and batik techniques.

“I first discovered the pa la nging textile in my grandmother’s room. In the past, civil servants used pa la nging to make sarongs and turbans but it vanished almost a century when the newer generations turned away from sericulture to cultivating rubber trees and other economic crops,” says Phiya, who graduated in crafts and arts from Rajamangala University of Technology Rattanakosin.

“I’ve worked with skilful weavers in Khon Kaen’s Chonnabot district on developing designs for hand-woven gold-thread silk and cotton to conserve our traditions. Khon Kaen’s cotton is famous for its soft texture, which looks smooth after being dyed making it ideal for batik.”

“I paint the fabric piece by piece, making them into one-of-a-kind artworks,” Phiya says, adding that he also lectures at several universities around the country to pass on his knowledge to the next generations.” Shophouses in Betong are adorned with street arts depicting the local lifestyle.

Visitors to his studio will be fascinated by the collection of fashion apparel for men and women, as well as totes, shawls, scarves, key rings and tissue boxes. The pa la nging textiles, meanwhile, are available at King Power, leading resorts and on Thai Smile flights.

“I want to help women in the community to generate more income and our members can earn at least Bt5,000 a month. I also want to invite tourists to my home, where they will see the Muslim and Thai-Chinese Buddhist villagers living and working happily together and not focus on the violence in this part of world,” Phiya adds.

Leaving Yala, we drive through the breathtakingly beautiful Bang Lang National Park towards Betong, the southernmost town in Thailand.

We explore the small town on foot and admire the stunning street art that covers many walls and portrays the Thai-Chinese lifestyle including old coffeeshops, dim sum shops, vegetable stalls and Betong’s iconic post box.

The clock tower circle is a popular shopping and dining venue and is home to boutiques, barbers, Chinese and Thai restaurants, noodle shops and bakeries. Here too we find the roti pushcart run by two young girls, which has been highly recommended to us by a group of military volunteers. Its popularity is evidenced by the long queue but soon we are munching on roti that are crisp on the outside and soft on the inside and smothered in egg, banana and coco powder. The next morning, we leave Betong at 5 to travel to the summit of San Kala Khiri Mountain. Crowded with Thai and international tourists, it’s the best vantage point in Aiyoeweng district to take in the beautiful sea of mist though we are unfortunate with the weather and see only one per cent of mist.

We continue to Piyamit Tunnel in Tano Mae Ro district, once a stronghold of the Communist Party of Malaya. Spread over one kilometre under the mountain, it was built in 1976 with multiple entrances to serve as an air raid shelter and to store food.

Hemmed in by a tropical forest, the Piyamit Histories Museum is boasting a rare collection of old weapons, self-produced prosthetic legs, black-and-white photographs, kitchenware and musical instruments. Also on view is a Chinese shrine and an imitation smokeless stove made of clay.

“We had almost 1,000 members who wanted to fight for democracy. The battles continued for 50 years and in 1987 our party split after the Thai government offered us 15-rai of land per family for farming,” says Uncle Sue Chong,68, who serves as a tour guide.

>> Piyamit Tunnel is open daily from 8am to 5pm. Tickets are Bt40 for adults and Bt10 for children.