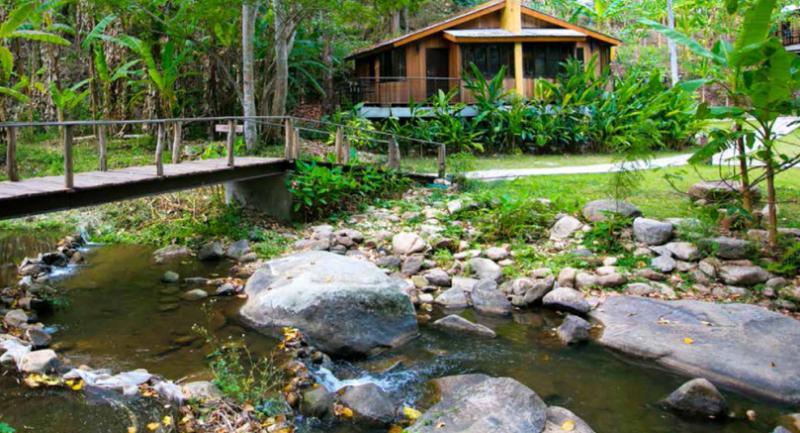 The Teen Tok development centre in Chiang Mai offers accommodation in a cabin next to a bubbling brook. Photo/Tourism Authority of Thailand

With Winter now officially here if the cooler temperatures in Bangkok are anything to go away, it’s time to start planning holidays in Thailand’s countryside. To help us make the most of our journeys, the Tourism Authority of Thailand has released “70 Royal Paths”, a complete guide to the royal projects across the country. From Chang Hua Man Royal Project in Phetchaburi to the Sirindhorn Museum in Kalasin, the guidebook features the royal projects in detail, along with ideas for organising trips and maps.

Here’s our pick of the five best destinations. For further reading, download “70 Royal Paths” at http://70waysofking.tourismthailand.org.

Doi Tung Development Project, about an hour’s drive from Chiang Rai city centre, is the brainchild of Her Royal Highness Princess Srinagarindra the Princess Mother who used macadamia nut trees and coffee plantations to stop land deforestation through illegal logging and opium cultivation. A must-visit is the royal villa which was originally built as a summer residence for the Princess Mother and now houses a museum displaying her work to improve the life quality |of local tribal people. Visitors |can enjoy colourful flowers and sip some coffee at a coffee shop in Mae Fah Luang Gardens. More adventurous souls can get an adrenaline rush on the treetop walk, the latest addition to the garden. Another attraction is the “Hall of Inspiration”, formerly known as the Princess Mother’s Commemorative Hall, covering the story of the Mahidol family, from His Royal Highness Prince Mahidol, the Princess Mother, Her Royal Highness Princess Galyani Vadhana, His Majesty King Ananda Mahidol and His Majesty King Bhumibol Adulyadej. Each exhibition shows the character, philosophies and working principles of the Royal Family and their work in finding ways to improve the lives and livelihoods of the Thai people.

Established in 1981 as a botanic research centre with the personal funds of the late King Bhumibol, Teen Tok Royal Project Development Centre is now becoming a well-known tourist attraction thanks to its picturesque landscape and the lush forest of Mae Takrai National Park. Visitors can visit coffee and miang (pickled tealeaves) plantations and learn more about the crops and how they benefit the locals. Flower lovers can immerse themselves in such colourful blooms as begonia, orchids, lipstick flowers, anthurium or flamingo flowers, purple shamrock and vanilla. Different kinds of flowering potted plants take it in turns to bloom throughout the year. With three houses next to brooks, visitors can book to stay and enjoy a serene night in the middle of nature. Nearby is the small village of Ban Mae Kampong, which is famous for the home-stays and the coffee sold at its many chic cafes. If walking is too boring, then try Flight of the Gibbon, the zipline canopy tour in Mae Kampong village.

Her Royal Highness Princess Maha Chakri Sirindhorn established Phu Fa Development Centre in 1999 to research, develop and spread knowledge about natural resources and environmental management to the locals. Strolling along the walking trail, visitors can enjoy nature, learn about the local culture as well as the social history of this quiet northern province. You can buy local products and stay overnight at the centre. Princess Maha Chakri Sirindhorn’s Phufa Villa is nearby and open. The nursery for rare trees is well worth a visit while tea lovers will enjoy a trip to the Oolong tea building where tea tasting is available. From Phufa Development Centre, it’s an easy journey to the salt wells of Bo Khlua.

Dinosaur enthusiasts should not miss Sirindhorn Museum in Kalasin. Both the museum and the Phu Kum Khao Dinosaur Excavation Site are situated in the foothills of Phu Kum Khao Mountain in Sahatsakhan District, approximately 28 kilometres from Kalasin town. The museum contains the most complete and largest collection of dinosaur fossils in Southeast Asia. Named after Princess Maha Chakri Sirindhorn, the museum also boasts mysterious walkways leading visitors back to the Palaeozoic Era, approximately 200 million years ago. Various exhibitions on geology, the beginnings of the Earth and how it was formed, and the evolution of living creatures such as dinosaurs and humans are on display. Highlights include life-sized skeletons of the many important dinosaur species discovered in this area, such as Phuwiangosaurus sirindhornae, Siamosaurus suteethorni and Siamotyrannus isanensis. The museum also displays the actual archaeological dig site where fossils of six dinosaurs were unearthed.

Located in Tambon Tha Sawang, eight kilometres from Surin city, the village is famous for ancient style silk weaving. The silk production in Surin boasts unique, Cambodian-influenced patterns. The most famous weaving house is the Chan Soma weaving centre where golden brocade for the royal court is made. Shiny and soft mai noi, the finest thread from the inner part of the silkworm cocoons is used for weaving. The thread is dyed or tie-dyed with natural colourings: red from stick lac, yellow from ermaginate wood or jackfruit, green from Indian almond and blue from indigo. The most stunning sight at the weaving centre is the 1,416-heddles weaving technique which requires four to eight people per loom, depending on the complexity of the pattern, and generally produces five centimetres of material a day.