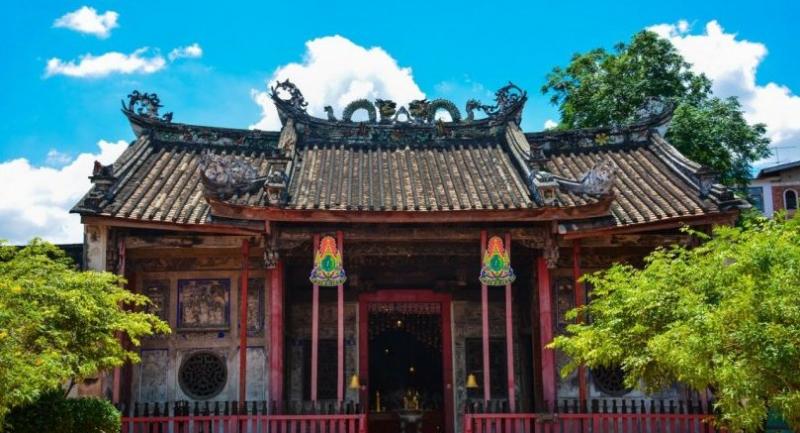 Kian Un Keng is within a walking distance from Wat Kalyanamitr on Thonburi side of Bangkok. Photo/Thanissorn Luckchai

By PHOOWADON DUANGMEE
THE NATION

With just eight days to go until the Monkey hands over to the Rooster, Chinese the world over are preparing for what promises to be a challenging year ahead. The rooster is by nature a fighter, a totem animal that never gives up, and that makes him one of the most popular symbols in the Chinese zodiac. According to belief, the cockerel is the mascot of five virtues – civil responsibility, marital fidelity, courage, kindness, and confidence – so he sounds like a perfect fit for troubled 2017.

Some, however, prefer to hedge their bets for luck in the year ahead by visiting a shrine or temple and making some offerings to the gods. Hidden among the skyscrapers and bustling marketplaces and malls, Bangkok has plenty of Chinese shrines at which to pray and they range from humble to extraordinary architectural wonders.

You don’t have to be spiritual or even superstitious to visit these sanctums. Some are worth admiring for their beautiful architecture and cultural significance. Listen to the chants and urban legends. Watch the performing ancient rituals and get giddy on the aromatic wafts of incense.

For giving and praying, these are eight best shrines to visit and revisit over the Chinese New Year.

Tucked away in an alley off Chinatown’s Soi Wanit 2, San Chao Rong Kueak was constructed by Hakka-speaking Chinese immigrants more than 100 years ago. San Chao Rong Kueak – literally the Shrine of Shoe Makers – might not well-known but it is one of only a few shrines made by the Hakka. In terms of number, the Hakka-speaking community is small compared to the Teochew and other Chinese. They are rebellious, itinerant, bookish and good at making shoes. You will meet many of them over the Chinese New Year since they always show up for Cai Shen – God of Wealth.

WHERE: Soi Wanit 2 is a short walk from Pier No.4 of the Chao Phraya Express Boat

Talad Noi marketplace has been home to Hakka and Hokkien-speaking people since Bangkok’s early days. While the Hakka are known as masters cobblers thanks to their excellent leather work, the Hokkein are blacksmiths who create all sorts of things out of metal. The leather and metal masters follow different deities and visit different shrines and Zhou Shi Kong is one of the oldest and most respected shrines among the Hokkien. It houses the statue of Zhou Shi Kong – the respected Chinese monk who lived in Fujian, Southeast China. Influenced by Qing dynasty architecture, the shrine is a heritage site in itself boasting woodcarvings, paintings and more. The best time to visit Zhou Shi Kong is before lunch as Talad Noi is the best place to tuck into hearty Chinese food.

WHERE: Soi Wanit 2, within easy walking distance of Pier No.4 of Chao Phraya Express Boat

Known as Chao Mae Thabthim (Goddess of Water) among the Chinese-speaking community, this is one of the most respected Chinese deities. Thabthim is native to an island in the South China Sea and the seafarers who braved the South China Sea as they sailed their large junks to Thailand very much counted on Chao Mae Thabthim’s power. Shrines to her can be found in Chinese-speaking communities, but the most visited is in Pahurat, Bangkok’s “Little India” right next-door to Chinatown. This Chinese shrine provided a “safe house” for people in the neighbourhood during the 1940s when Bangkok was bombed by the Allies.

WHERE: Corner of Chakphet and Tri Phet Roads, Chinatown

Also known as Wat Leng Noei Yi, this temple was established in 1871 for Mahayana Buddhists in Siam. Wat Mangkon Kamalawat is the largest and most important Chinese temple in Bangkok. Incense and the sounds of chanting dominate the prayer hall, especially during the Chinese New Year. Tea and fruit are offered to gods and deities as prayers and devout worshippers brave the clouds of incense to kneel and pray for a good and peaceful year ahead.

This Chinese shrine is part of the Thian Fa traditional Chinese medical hospital. Established in 1902 by Chinese immigrants, the shrine houses a statue of the Goddess Kuan Yin that is said to be carved from teak and believed to be more than 800 years old. The shrine always draws people to pray for a healthy life during the Chinese New Year.

WHERE: Corner of Yaowarat 5 Alley and Yaowarat Road

Guan Yu – the red-faced, bearded Chinese deity – was a well-known warrior and is known to Thais for his leading role in the “Romance of the Three Kingdoms” novel. Described as a criminal who fled his home to join the militia, he is loved by both the lawful and the lawless for his courage and honesty. There are several shrines to him but the oldest is nestled along the Chao Phraya River on the Thon Buri side and is 280 years old. Three statues of Guan Yu preside over Chao Phraya River from inside the shrine’s red chamber. The smallest statue is believed to have been brought from Fujian in Southern China, while the two others were contributed by Qing emperors.

WHERE: Take the ferry from Si Phraya to Khlong San then a tuk-tuk for the short ride to the shrine.

The wooden statue of Goddess Kuan Yin is enshrines at Kian Un Keng, a beautiful Chinese shrine perched on the bank of the Chao Phraya River, Bangkok. Photo/Thanissorn Luckchai

Kian Un Keng Shrine is one of the oldest of its kind in Bangkok. Looking out over the Chao Phraya River and next door to Wat Kalayanamitr, the shrine was founded and rebuilt more than 200 years ago. Rustic and beautiful, it draws visitors to pay respects to the Goddess Kuan Yin as well as to admire its magnificent woodcarvings. Built by the Hokkien Chinese, who followed King Taksin the Great to the new capital city in Thon Buri, the shrine makes a strong statement about the craftsmanship of that era.

WHERE: A ferry runs between Pak Klong Talad and Wat Kalayanamitr.

Unlike the famous Guan Yu Shrine along the Chao Phraya River, this shrine is smaller though the intensity of the incense cloud tends to be greater. Hidden behind the Old Market of Yaowarat, this shrine was erected to honour both Guan Yu and his horse, Red Hare. A magnificent mount, Red Hare was said to be strong and capable of travelling 200 kilometres a day. Devotees visit the shrine once in a while to pray for strength.

Easy walking distance from Ratchawong Pier to the corner of Song Wat and Yaowa Phanit roads, the shrine was established by Chinese immigrants who disembarked from their junks during the reign of King Rama III to house and honour traditional Chinese deities. Lao Pun Tao Kong – a kind of “chief of staff” of local deities – is enshrined here. The shrine is said to be especially good for those who want their prayers answered and devout worshippers flock here to pay their respects all year round – and especially during Chinese New Year – to reflect on their sins.