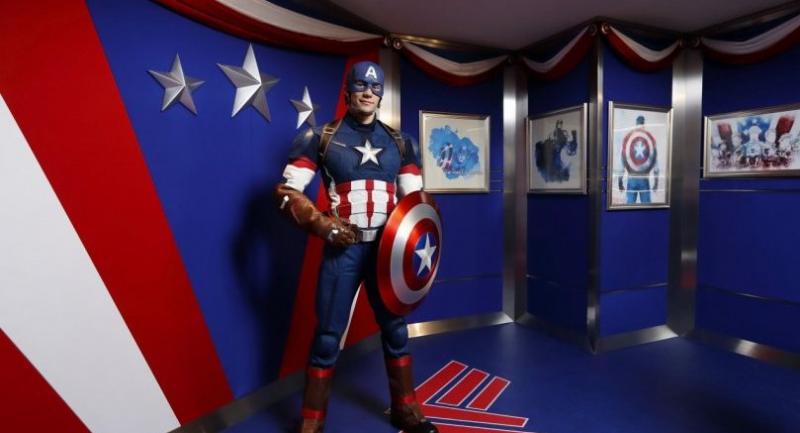 Calling all super hero fans! Captain America, Iron Man, the Black Widow and Spider Man have joined up for the Marvel Super Hero Summer that is taking place at Hong Kong Disneyland Resort until September 3.

On a mission to save the world, superheroes are calling on young guests to join the ranks of the Agents of S.H.I.E.L.D, offering youngsters S.H.I.E.L.D. Agent Credentials and a personalised ID 1 at a designated location before joining training with the Iron Man Experience simulator.

Captain America stands by at the entrance of Hero’s Welcome space and greets new recruits to the team. Agents will meet the legendary web-slinger at the Spider-Man Heroic Encounter and then walk through Mission: Dimensions of Danger to join Super Heroes in the battle against evil forces through interactive action with Thor and Star-Lord.

Black Widow and Hawkeye show up in Launch Bay while the mighty Thor appears in Odin’s Vault and Star-Lord joins the adventure in the Collector’s Museum. A super hero team will back up guests in helping Doctor Strange recover the powerful Portal Nexus artefact before it falls into the hands of Hydra.

“Marvel’s Super Heroes are some of the world’s most fascinating characters and appear in amazing stories. We’re incredibly proud to create this experience just for our fans in Asia,” says Randy Wojcik, creative director of entertainment and costuming, Hong Kong Disneyland Resort.

“Following the incredible success of Iron Man Experience, which inspired double-digit growth in male guests, even more Super Hero-themed entertainment is now here This summer, a number of Marvel Super Heroes have assembled in the park for the first time ever, and guests can step into the exciting Marvel Universe filled with action-packed, interactive elements in a new, Hong Kong-exclusive experience.”

HKDL has also teamed up with Marvel to introduce a limited-edition Marvel comic book, entitled “Iron Man Experience: Hong Kong Heroes 1” that are available during Marvel Super Hero Summer only at the park.

“As Marvel continues to grow globally, so does our international fan base, and it’s important to us that our stories now reflect the world outside the windows of our readers no matter where they live,” says CB Cebulski, vice president of Marvel Brand Management and Development, Asia.

Guests holding with S.H.I.E.L.D. Agent Credentials and ID can enjoy a 20-per-cent discount on the limited edition Hong Kong Disneyland Marvel comic book when they have completed specific missions and collected all four Medals of Valor in the park.

Agents looking for new gear can check out the latest collection of 300 Marvel-themed items in the Marvel Supply HQ boasting supercharged T-shirts, awesome stationery and toys featuring Spider-Man, Captain America and the Avengers.

And guests can boost their energy with more than 20 Marvel-inspired food and beverage choices including Stark Kitchen’s Hero Burger Combo that will satiate any hero-sized appetite.

The event also features the Marvel 10K Weekend 2017 in mid-September and Captain America, Spider-Man, Thor and other Marvel Super Heroes will be on hand to cheer the runners on.

Find out more at www.HongKongDisneyland.com.