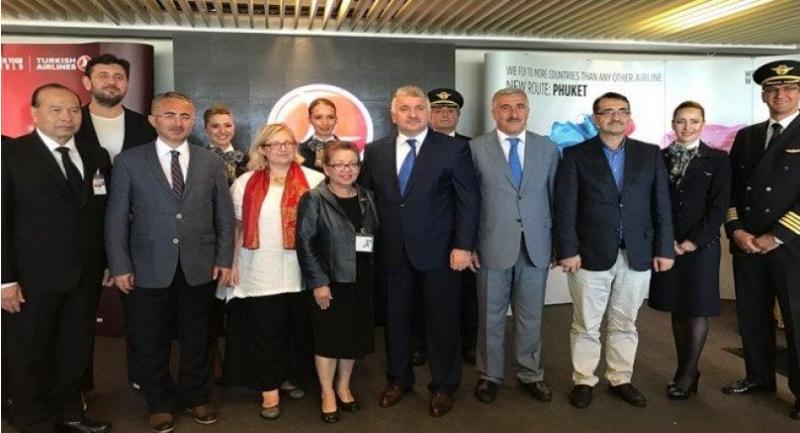 Representatives of TAT, the Turkish Embassy and Turkish Airlines at the press conference to announce the launch of the new Istanbul-Phuket flight on 17 July, 2017. Photo: TAT Newsroom

Turkish Airlines is now offering four direct flights per week from Istanbul to Phuket, one of the world’s best known beach destinations with a number of award-winning beaches voted for by tourists.

Mrs. Pataraporn Sithivanich, TAT Executive Director for Europe, Africa and the Middle East Region, welcome the new flights and said, “This new Istanbul-Phuket service is part of the collaboration between TAT and Turkish Airlines to meet the growing demand for travel to Thailand from holiday-makers from Turkey, Europe and Latin America. In addition, 2018 marks 60 years of Thai-Turkish relations, and TAT is planning to organise cultural and tourism activities in cooperation with the Embassy of the Republic of Turkey in Thailand.”

Turkish Airlines inaugurated its Istanbul-Phuket route on 17 July with the first flight carrying 210 passengers, including 20 members of the media from Turkey. The journalists and writers got the chance to visit important attractions in Phuket and nearby provinces, including Phuket Old Town, Wat Chalong, Siam Niramit Phuket and James Bond Island.

The airline plans to increase the frequency of the Istanbul-Phuket route from four times per week to a daily flight in the upcoming winter season, to cater to the higher demand for Thailand. Phuket is Turkish Airlines’ 300th destination. The airline began a direct Istanbul-Bangkok service in 1989 and now operates 14 flights per week.

Mrs. Pataraporn said, “Since 2012, Turkish nationals entering Thailand have been able to apply for a visa-on-arrival and this has led to many more people discovering Amazing Thailand. We know this new Turkish Airlines’ direct Istanbul-Phuket flight will ensure that more visitors enjoy the delights and unique culture of the southern region of Thailand.”

Turkey is one of Thailand’s important merging tourist markets. In 2016, Thailand welcomed 74,568 visitors from Turkey, representing an increase of 17.97 per cent over 2015. This year, from January – May, there were 35,605 Turkish travellers to Thailand, up 2.66 per cent year-on-year.

The majority of Turkish travellers visit Thailand for a holiday, especially during November-January. Top Thai destinations among Turkish tourists are beaches and islands; such as, Pattaya and Phuket.