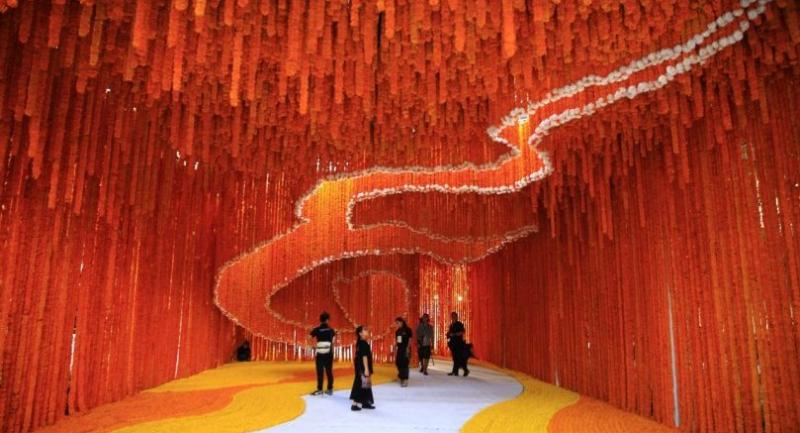 FLOWER VENDORS in Thailand’s largest flower market Pak Klong Talad have joined the rest of the country in saying a final farewell to His Majesty the late King Bhumibol Adulyadej by creating a floral tribute that stretches for 400 metres along Chakphet Road.

Put together by the market traders with the assistance of local residents and volunteers from around the country, the blooming masterpiece, known as “Flowers for Dad” is on view until Friday. “Thais” is designed to resemble 89 metres of flowing fabric representing the age of the late King Bhumibol and is decorated with different shades forming the colours of the Thai flag at the edge.

Among the amazing sights are floral tunnels built with millions of colourful flowers representing the deep feeling of love that Thais have toward their beloved monarch.

But while the showcase has drawn admirers from around the country, it has also been a victim of over-zealous attention. It was temporarily closed last night to allow for repairs to the landscaping and electronic systems, damaged by selfie addicts so keen to get a shot that they trampled the poor flowers.

“Last year, we arranged bouquets in front of our shops to mark the late King Bhumibol’s birthday on December 5 and florists from all over Thailand wanted to take part. So we invited them to pay respect to our beloved monarch by joining our Flowers for Dad project,” says project head Pornsomjai Huadhoon.

“All the flowers have been donated by vendors in Pak Klong Talad and flower gardens nationwide. We raised the money to buy the arch structures by selling black polo shirts around the community. We are grateful to the Miracle of Life for providing a professional team to help us with the visitors and for the cooperation of the Bangkok Metropolitan Administration,” Pornsomjai adds. Pornsomjai Huadhoon plays as a head of the project to bid farewell to the beloved Monarch.

“Two decades ago, we were growing opium poppy on mobile plantations around the villages. The late King Bhumibol and Queen Sirikit instructed the Department of Agricultural Extension to educate us in growing corn, chilli and marigolds. Today, we have a better quality of life and this is our last chance to pay respect to the late King Bhumibol,” Noppadon says.

Designed by well-known wedding and funeral organiser Chayawat Panjaphakdee from Niralai by Rainforest, the flower exhibition is divided into six zones and based on two colours – white symbolising purity, goodness and heaven and yellow marking Monday, the late King’s day of birth.

Noppadon Charoenpholpalit, the owner of marigold farm in Take’s Phop Phra district, Tak, has planted 99,990 marigolds, which can produce more than a million of marigold flowers.

Focusing on several kinds of flowers that boost the Thai economy, such as marigolds, orchids, lotuses and chrysanthemums, the landscape is designed as a modern graphic artwork to reflect the beauty of nature even when flowers gradually turn brown.

“We don’t want to limit colours so our designs provide more flexibility. The Pak Klong Talad community has made it easy by inviting everyone to join and share materials. The donations from local flower vendors and growers across the country have far exceeded our expectations and we received 30 tons of flowers. Everyone has come to tell the world how much we love our king,” Chayawat says.

“We just want people to remember our project. The late King is a powerful inspiration of doing good without expecting anything in return.” Renowned flower organiser Chayawat Panjaphakdee from Niralai by Rainforest is behind the astonishing flower landscapes.

White flowers in the shape of the Thai numeral nine welcome visitors to the exhibition and lead to the first arch named “Thais”, which is designed to resemble 89 metres of flowing fabric representing the age of the late King Bhumibol. Mainly made from pure white flowers, the edge of tunnel is decorated with different shades forming the colours of the Thai flag.

“The idea comes from the Thai idiom about children looking like a white fabric to which you can add colours. Thais have undergone many troubles but the late King Bhumibol has brought us back together. Thailand opens its doors wide to everyone no matter their religion or beliefs. We can live together in harmony,” Chayawat says. “Rain” is adorned with pink lotuses, inspired by the famous photo of Tum Channit, the elderly lady who waited so patiently to greet the late King that the lotus flower she was holding wilted.

The second arch “Rain” takes inspiration from the famous photo of Tum Channit, the elderly lady who waited so patiently to greet the late King that the lotus flower she was holding wilted. The image was snapped in 1955 during his visit to Nakhon Phanom Province and reflects how King Bhumibol’s graciousness is like the rain, a blessing that revives withered flowers so they become blooms in Thai hearts. This arch uses lotus flowers to simulate a stream of water and a floating lotus and implies that the principles of the late King help enlighten his people.

“When the late King Bhumibol received a wizened lotus with a smiling face, he was teaching us that we shouldn’t look at people just by what is on the exterior but look into their heart. He’s a role model who always guided us in how to conduct ourselves,” Chayawat says. The “Imprint” arch imitates the mountain ranges of the northern region in a colourful mixture of chrysanthemums and the other cool climate flowers that drive the local economy.

The “Imprint” arch imitates the mountain ranges of the northern region in a colourful mixture of chrysanthemums and the other cool climate flowers that drive the local economy.

The design illustrates how the late Monarch turned the opium fields and barren mountains into fertile fruit and vegetable plantations by setting up more than 4,000 royal initiatives to improve the quality of life of his people.

The innovative arch known as “Home” catches the eye with 77 daffodil-inspired chandeliers made with crown flowers suspended from the roof in the shape of Thailand. It symbolises how the late King’s graciousness is evenly showered over 77 provinces.

“Daffodils represent the love between the late King and Queen Sirikit. We use it to convey that his love is given to his people as well,” Chayawat says. The last arch called “Montarop” is designed to look like a gate to heaven and is exquisitely decorated with montarop or magnolia flowers, which are believed to have originated in heaven.

The yellow-gold arch of “King Rama IX” represents Monday, the day on which the late King was born and is adorned with a large marigold curtain woven in the shape of the Thai numeral nine.

“We play with sunshine in making a three-dimensional marigold curtain to look like the Thai nine. This is a new technique and one that I haven’t used before. It’s inspired by the sufficiency philosophy,” Chayawat says.

The last arch, “Montarop” is designed to look like a gate to heaven and is exquisitely decorated with montarop or magnolia flowers, which are believed to have originated in heaven.

BLOSSOMS FOR THE KING

>> “Flowers for Dad” continues to Friday. Admission is free.

>> Find out more at the “ChumchonPakKlongTalad” page on Facebook.