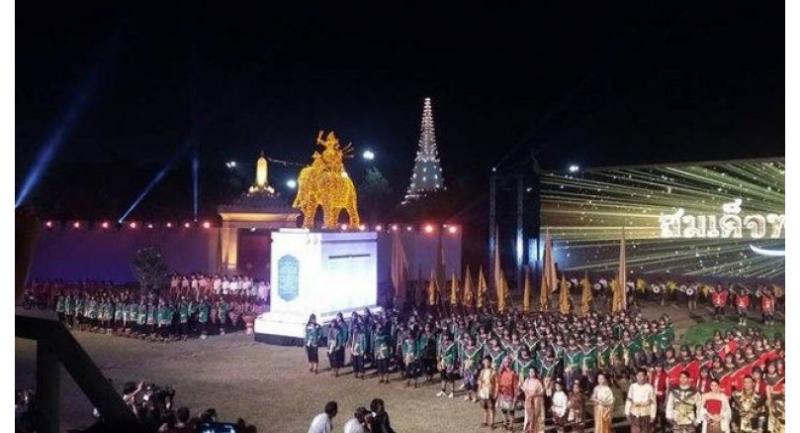 The 15-day event is organised to commemorate the glorious victory of King Naresuan the Great over the Burmese forces. History has it that in January 1592, King Naresuan the Great of Siam defeated Phra Maha Upparacha, the Burmese Crown Prince, in a royal duel on elephant’s back, enabling the Siamese kingdom to regain sovereignty from the occupiers.

The Don Chedi Monument comprises two sites, a royal monument in honour of the Siamese victory and a pagoda enshrining relics. The Royal Thai Army renovated the pagoda in 1952, building a new 66-metre high and 36-meter wide structure over the ancient one. The statues of King Naresuan the Great and his elder sister Phra Suphankanlaya are also located in the compound.

A highlight of the festival is the light-and-sound and multimedia mock-up war on elephant’s back, with a total of 10 shows being held throughout the two-week long event. Showtimes are from 18 to 31 January (except 22-24 and 29 January), from 19.00-20.15 Hrs. Tickets cost 100 Baht, and can be bought at the event.

Other interesting shows and activities include musical performances, Khon masked dance, and a number of contests and competitions, including Suphan Buri accent speech, country singer, popular singer, and beauty pageant.