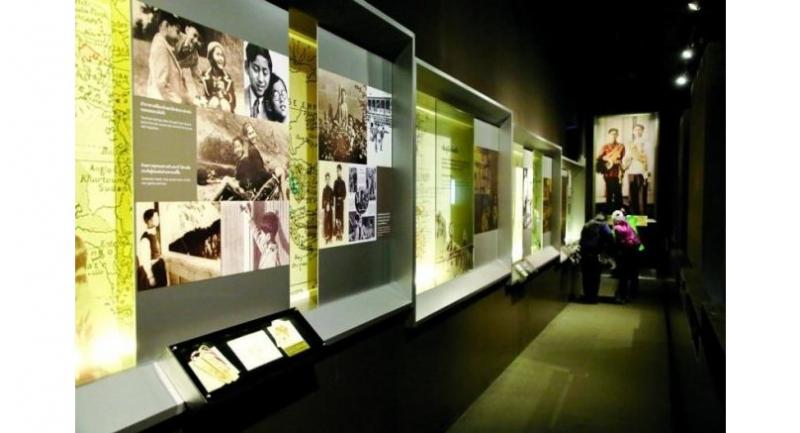 The Hall of Inspiration presents several exhibitions about the Princess Mother and her family and the royal initiatives.

THE MOUNTAINS of Northern Thailand are beautiful at any time of year but they are at their very best in winter, when the land is blanketed with colourful flowers as far as the eye can see.

Nowhere is this more true than in Doi Tung, a remote area that 30 years ago was home to some of the poorest people in Thailand, their meagre earnings coming from growing the opium poppies so prized by the rich warlords who controlled the Golden Triangle.

Today the land is covered with organic crops and beautiful blooms and its residents are thriving thanks to the Doi Tung Development Project.

We’re up here at the invitation of Central Food Retail, who has organised a three-day trip to thank its biggest purchasers of Tops organic products. The Hall of Inspiration presents several exhibitions about the Princess Mother and her family and the royal initiatives.

Run by the Mae Fah Luang Foundation, the site was set up in 1988 by Her Royal Highness the late Princess Mother to reforest the bare mountains and educate villagers about sustainable horticulture. These days it occupies more than 93,000 rai and is home to the villages of six hilltribes – the Lahu, Tai Lue, Akha, Lua, Shan and Chinese, the latter the descendants of Chiang Kai Shek’s soldiers who settled here after World War II.

Our first stop is the two-rai agricultural demonstration plot and macadamia factory. Macadamia nut is considered as the king of nuts as it is low in cholesterol. Growing the nuts requires patience, as it takes seven years before the first nuts can be harvested. These trees have been treated with Mother Nature’s pheromone to protect them from bugs, fertilised with bark and pollinated by the local honeybees.

“We used to import young macadamia trees from Australia but now we have developed our own species that’s suited to Thailand’s climate. The nuts can be harvested from February to November, and each tree produces about 50 kilograms nuts a year,” says Surasak Siangdee, who’s in charge of the factory. A member of staffs demonstrates how to select the macadamia nuts before they’re roasted.

“We’re the only one to produce macadamia honey in Thailand and this reflects the abundance of our forests. The nuts are roasted for one to two weeks before being infused with six flavours – seaweed, pizza, wasabi, honey, natural and salt.”

Another part of the project is planted with Arabica coffee, which thrives at a altitude of 800 metres. In 1989, the Department of Agricultural Extension supplied the Arabica coffee species, called F 8, which offered disease resistance. All the red cherries here are harvested by hand and promoted as single-origin.

“We just learned a new technique to manage coffee plantations from specialists in Guatemala. It’s not worth cultivating plants older than 30 years so we spent five years growing a new selection of 500,000 young coffee plants to renew our farm. We also teamed up with Japanese coffee hunter Jose Kawashima to create farm management and cup taste programs, focusing on productivity,” explains Luang Namyee, chief of coffee extension. The Mae Fah Luang botanical garden is the biggest rhododendron garden in the Southeast Asia.

Opened in 2007, the Hall of Inspiration takes visitors back to the project’s beginnings through several interactive exhibitions. It has seven rooms, through which the story of the Mahidol Family and the royal initiatives to help people improve the quality of their lives are told. Visitors can admire rarely seen photographs of the Princess Mother and her family as well as some imitation collectibles.

We join a handicraft workshop on making tung sai moo – an elaborate lantern made from paper named because it looks like a pig’s intestine. Here it’s used to pay homage to Phra That Doi Tung and the Tai Lue, Yuan and Tai Yai believe the lantern will lead them to heaven.

We tuck into afternoon tea in the delightful ambience of Mae Fah Luang arboretum, feeding our tummies with delicious snacks and feasting our eyes on the largest rhododendron garden in Southeast Asia in dazzling red, pink and orange. “This landscaped garden occupies 63 rai and combines several rhododendron species from Australia, Belgium, Japan and China as well as other seasonal blossoms like dahlia, amaryllis and New Guinea impatiens. With an average temperature at 20 to 25 degrees Celsius, rhododendron grows very well at altitudes of 1,000 metres up,” says Thawatchai Yaibua, the arboretum’s manager.

“Our garden is a popular bird-watching spot, where visitors can see grey-winged blackbirds and white-rumped shamas who migrate here from China and Siberia during December to April.”

Renowned chef Ian Kittichai feeds us on a four-course dinner using organic ingredients from the royal project and Tops supermarket such as macadamias, strawberries, Meishan pork, duck and organic vegetables and the meal kicks off with Crispy Duck with seasonal greens served in honey and mustard dressing. New England Chowder, tender Pork Bourguignon paired with mushroom and truffle mustard follow and we finish with Blancmange made from macadamia cream accompanied by fresh strawberries and vanilla ice cream. Villagers showcase a wide selection of ethnic delicacies and sweets in the Mini Colours of Doi Tung Festival.

The next morning, we explore the Doi Tung Royal Villa, which is made from teak the Princess Mother personally purchased from Khlong Toei Port. It’s a mixture of Swiss Chalet and Lanna style designs, and a showcase of top-class craftsmanship.

Each room is simply adorned with wooden furniture and charming works handcrafted by the Princess Mother that reflect her self sufficient lifestyle during 1988 to 1994. Designed to resemble a planetarium, the main hall has a wood ceiling adorned with sculptured zodiac signs and hand-embroidered fabric wallpaper in classic floral motifs.

Coming out of the villa, we find ourselves in Mae Fah Luang Garden and take a stroll along the newly opened 300-metre long Tree Top Walk. We’re shown how to use the safety harness then move between the eight platforms offering panoramic views of the Doi Tung jungle from the top. The Haw Kham in the Mae Fah Luang Art & Cultural Park has a display of rare teak artefacts and religious items from around the northern region.

At lunchtime, the Doi Tung Lodge is turned into a courtyard for a Mini “Colours of Doi Tung” Festival where villagers serve us a wide selection of traditional delicacies such as khao pookping (grilled black sticky rice cake mixed with sesame and filled with sugarcane), khao kanchin (steamed rice mixed with pork blood) and black chicken stewed with Chinese herbs.

In the evening, we head down to the Mae Fah Luang Art & Cultural Park in downtown Chiang Rai, whose Haw Kham is home to one of Thailand’s biggest collections of Lanna artefacts including a 200-year-old Mandalay-style Buddha teak statue.

Leaving for centre for its courtyard, we are served a Lanna-style dinner of Northern-style dishes for dinner, while students in traditional costumes entertain us with dancing.