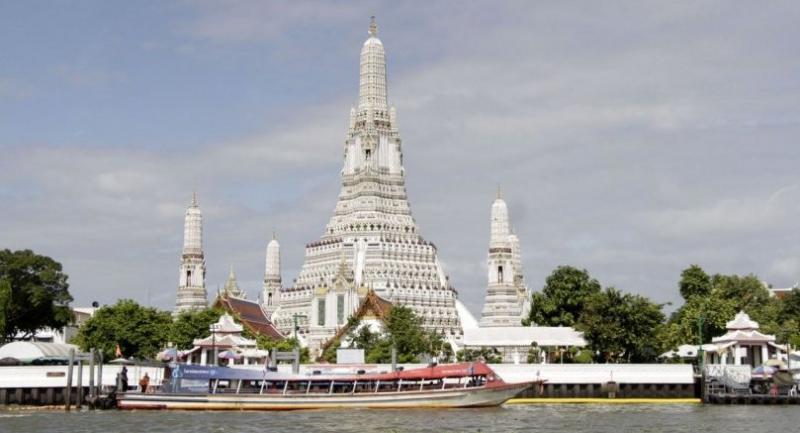 Wat Arun Rajawararam – the Temple of Dawn – is a marvel to see from a distance and magical to tour in person. King Rama III built the iconic nine-spire prang. Inside, you can crawl under King Taksin’s bed for good luck.

THON BURI is celebrating the 250th anniversary of the year it became Siam’s capital with an invitation to trace the path of its founder, King Taksin the Great. Most of the trail hugs the river, so it’s a wonderful cruise with frequent stops to contemplate history.

Grab a tour boat at the Tha Tien Pier, from which Phra Racha Wang Derm can be glimpsed in the distance. King Taksin had it erected in 1768, signalling his decision to establish his kingdom on the western bank of the Chao Phraya River.

Here he would recreate in layout and architecture the glories of Ayutthaya, the centuries-old capital lost to the invading Burmese. The river and newly dug canals would protect Thon Buri from the same fate. King Rama I ascended to the throne in 1782 and relocated the royal palace to Rattanakosin Island, the beginnings of Bangkok’s elevation as the capital.

Thanks to its strategic location, though, King Taksin’s palace remained a royal residence until the reign of King Chulalongkorn, Rama V, when it was bestowed on the Royal Thai Navy to serve as its headquarters.

The elegant Throne Hall within has been retained, as have the apartments of King Pinklao – Siam’s viceroy under King Rama IV – and a shrine to King Taksin, and the Whale Head Shrine, open to visits by appointment only.

A few minutes upriver is world-famous Wat Arun Rajawararam, whose unforgettable Khmer-style, nine-spire prang has recently undergone a Bt100-million renovation. It was known as Wat Makok when first built, then was renamed Wat Chaeng – the first reference to a “temple of the dawn” – after King Taksin paid a dawn visit to worship among the venerable 16-metre-tall prang. King Rama II ordered a major restoration and changed the name again, this time to the present Wat Arun Rajawararam. His ashes are interred in the base of Phra Phutthatham Misaratlokdilok – the temple’s large Buddha statue with a beautiful oval face.

King Rama III completed the refurbishing, adding at the entrance a pair of guardian statues of the demons Tosakan and Sahatsadecha.

The ubosot is trimmed with porcelain in pastel hues and flower motifs, plus 144 Chinese stone sculptures of deities, knights and animals. Inside are marvellous murals illustrating scenes from the life of the Buddha and the Vessantara Jakata.

It took nine years to construct the compound from which the 68-metre corncob-shaped prang rises. Inspired by Buddhist cosmology, the assemblage is meant to evoke mythical Mount Meru. From base to pinnacle, the stonework is adorned with seashells, Chinese porcelain, floral tiles and statues of demons and angels ascending to Heaven (or descending from it). The King Taksin Shrine draws pilgrims with the opportunity to crawl beneath his wooden bed, which dates to 1767, the year Ayutthaya fell. Close proximity to the very place where King Taksin dreamed is said to bring good fortune and protection from harm.

Just a stone’s throw away is Wat Rakang Kositaram Woramahavihan, constructed while Ayutthaya was still enjoying its heyday. King Taksin had it renovated and made it the residence of Supreme Patriarch Sri.

The temple’s classic Rattanakosin-style ubosot with its three-tier roof was built in the reign of King Rama III to enshrine Phra Prathan Yim Rub Fa, a bronze statue of the meditating Buddha. And King Rama VI blanketed the walls with striking murals of angels paying homage.

At the rear of the temple is the original hardwood residence of King Rama I while he was in service during the Thon Buri period. Transformed into a Tripitaka Hall in 1982, it’s filled with antiques, cabinets holding age-old scriptures and murals with episodes from the Ramayana.

Tam Nak Daeng is King Taksin’s residence that was moved from the Thon Buri Palace during the reign of King Rama I. It’s currently being renovated as a showcase for a revered statue of King Taksin and other artefacts. At the mouth of the Bangkok Noi Canal is the former Royal Barge Procession Dockyard, established under King Taksin and converted into the Royal Barges National Museum in 1974. This is where you can see eight of the beautiful royal barges that have carried all the Chakri kings, topped by the truly magnificent barge Suphannahong.

King Rama V commissioned the building of Suphannahong and the work was completed in 1911, not long after his death. The gilded prow takes the form of a mythical swan and sparkles with mirrored glass. The hull is black on the outside and red on the inside.

Docked alongside, the Narai Song Suban HM King Rama IX Royal Barge is the newest in the fleet. It was built in 1996 to commemorate the 50th anniversary of His Majesty King Bhumibol Adulyadej’s accession to the throne. Coated with gold lacquer, the prow is a carved depiction of the four-headed god Vishnu riding the Garuda. Barge oarsmen demonstrate a stroke used only by crews of the four royal barges that carry the King and members of his family.

Ask politely for permission and you might get to visit the Royal Barges division offices and watch the oarsmen actually paddling a barge, singing as they go. Lieutenant Nattawat Aramklua, who has served as cantor in royal barge processions for 37 years, conducts the crews through training both on the land and in the water several months a year. Their strokes have to be perfectly synchronised with his resonant singing.

“We compose new songs for specific occasions,” Natthawat explains. “It takes 1,614 oarsmen to propel a procession of 52 barges, using three basic strokes to speed up and control the direction.

“The crews of the four barges carrying the King and other members of the royal family use a special gesture, raising their oars into the air between each stroke.”

THE PAST ACROSS THE RIVER

>> Tour groups can book a visit through the Phra Racha Wang Derm Restoration Foundation at (02) 475 4117 or www.WangdermPalace.org.

>> The Royal Barges National Museum is next to Khlong Bangkok Noi and open daily from 9 to 5. Admission is Bt100.