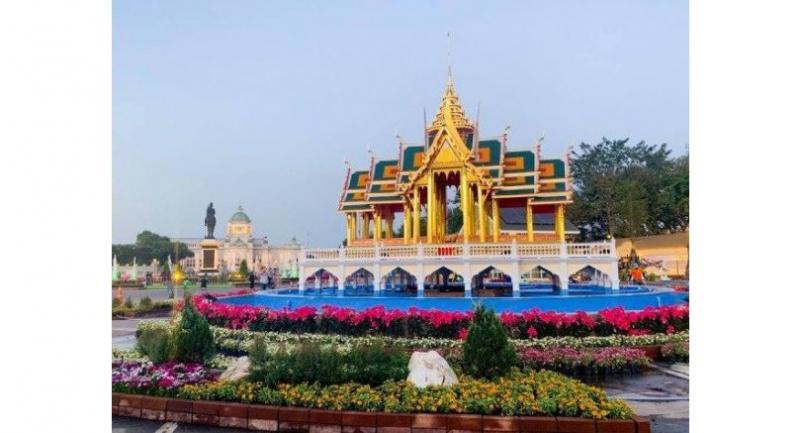 His Majesty King Maha Vajiralongkorn Bodindradebayavarangkun has granted royal permission for the organising of the second winter festival titled “Un Ai Rak Khlai Khwam Nao,” or “Love and Warmth at Winter’s End,” at the Royal Plaza on the grounds of Dusit Palace and Sanam Suea Pa in Bangkok from December 9, 2018 to January 19, 2019. The first edition of the festival was held earlier this year from February 8 to March 11.

The festival, the second of its kind, will be held under the theme “The River of Rattanakosin” in a delightful retro atmosphere. It is intended to bring happiness and fun to the people and reflect the magnificence of Thai arts, culture, and traditions.

The opening day also featured a special performance reflecting the event’s theme “The River of Rattanakosin” and live music by four Thai military marching bands and the Chalermraj band.

For 42 days, the “Un Ai Rak Khlai Khwam Nao” festival will feature exhibitions to provide visitors with the opportunity to learn more about Thai history and the value of the waterways of Rattanakosin. Visitors will experience Thailand’s river-based culture amid numerous species of plants and fantastic artistic creations, such as: the model of Aisawan Thipphaya-at Pavilion, the Thai-style pavilion in the middle of a lake at Bang Pa-In in Ayutthaya; royal barges; and architecture from the early Rattanakosin period to the present day.

Visitors will also have the opportunity to visit Royal Family shops, taste delicious food from both floating and non-floating markets, and enjoy a variety of cultural performances. They can also take part in a merit-making activity by purchasing “Matcha Pha Chok” tickets for lucky draws and a charity lottery, with many prizes on offer.

Visitors are encouraged to dress in traditional Thai costumes worn during the reign of King Rama V, or other forms of traditional costumes made of Thai fabrics from various regions of the country, which reflect the Thai way of life through clothing.