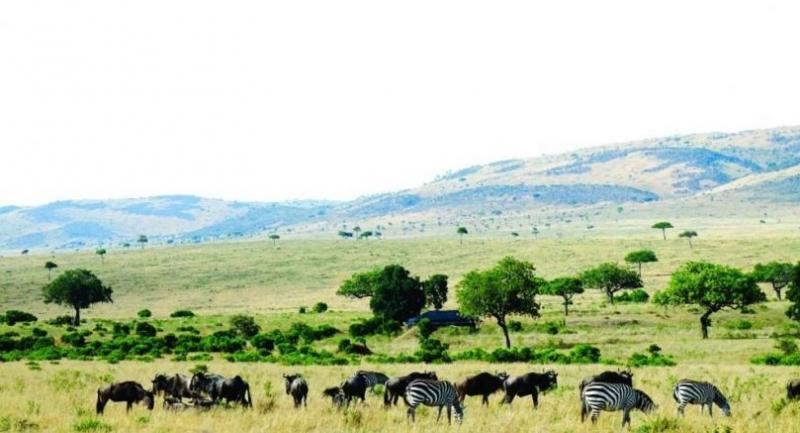 The Masai Mara Reserve is the best spot to experience the annual “Great Wildebeest Migration” between Tanzania and Kenya.

By Pattarawadee Saengmanee
The Nation Weekend
Laikipia and Narok, Kenya

AFTER A stay at the home of Elsa the lioness, I’m not expecting another large dose of safari excitement from our next stop in the wilds of Kenya but the hills and green bushlands of Loisaba Conservancy take my breath away.

Our first-class Skysafari Kenya Connoisseur trip by Elewana continues with a short hop on a private jet from Meru National Park and 45 minutes later, a smooth landing on the Loisaba airstrip. The facilities here are surprisingly modern, with a reception area with clean washrooms and a tourist information centre with polite and friendly staff. A sundowner at Loisaba Conservancy

This 56,000-acre wildlife conservancy and working ranch in Northern Kenya is testament to the efforts of the late Count Carletto Ancilotto, who bought the land in the early 1970s and set it up as a low-impact cattle farm.

In 1997, he leased the land to a group of young Kenyan and American entrepreneurs, who created the Loisaba brand and managed the spread as a wildlife conservation and tourism area as well as a farm until December 2014.

The property is now in the hands of The Nature Conservancy in partnership with Space for Giants elephant foundation and is promoted as a world-class ecotourism destination, home to more than 800 elephants and 50 other wildlife species.

Our young driver and guide Muhammed escorts us to the five-star Loisaba Tented Camp, which is perched on a cliff on the Laikipia Plateau. Chic with an modern African design and European twists, it offers 12 en-suite tents, Family Combinations and Three Family Combinations, plus an infinity swimming pool and an elegant lounge and bar that brings a sense of urban living to the savannah.

Powered 100-per-cent by solar energy and an electric generator, my home for the night is the comfortable 49- square-metre tent number 12, with a private deck overlooking the lush landscape that stretches all the way to Mount Kenya.

My tent has twin beds with a functional headboard equipped with several USB hubs and plugs, while the en-suite shower is fitted with a water heater that allows us to choose between rainfall and rain shower.

Refreshed and unpacked, we set off in the late afternoon in a Land Rover Defender for a three-hour game drive, heading to the sprawling moorland. I stare out of the window as we weave our way through cacti heavy with prickly pears catching a glimpse of olive baboons and grevy’s zebras searching their food and elephants trying to get away from the curious tourists. “The prickly pears were brought from Mexico and we use their fruit to make refreshing juice,” Muhammed says.

“African elephants have different skin colours depending on the soil endemic to their homes. Today, there are only 3,000 grevy’s zebras left because people use their skin to produce home furnishings.”

The area is a haven for more than 260 species of birds and we spot guinea fowl, eastern pale chanting goshawks, martial eagles and African grey hornbills. As the temperature drops to 15 degrees Celsius, the camp staff team sets up a sundowner corner with a waterfall as the backdrop and serves delicious grilled sausages with wine and gin and tonic.

The next day, we learn about native plants and wildlife during a fun 90-minute bush trek led by Muhammed and a fully armed ranger. Apart from the Mexican cacti, the savannah is covered with toxic yellow sodom apples, from which locals apparently extract a few drops to treat toothache, ringworm and wounds. It's estimated that there're only 3,000 grevy's zebra left around the world.

I walk slowly, careful not to tread in the piles of dung left by dik diks and hyenas to mark their territory. By the time we reach the halfway mark, the rain is heavy and Muhammed decides to take us back to the camp.

“Elephants don’t have sharp eyes but are sensitive to the smell of humans and guns. Fibre from Impala’s dung can be used to produce paper,” he tells us. The rain continues throughout the day so we shift to a night safari but are out of luck. The animals hide from our powerful spotlights, so we only see some little dik diks, impalas and rabbits.

Next morning, we check out of the camp and the Samburu villagers invite us to join a pleasant 45 minutes camel ride into the bush where a mobile pantry has been set up for our breakfast.

Returning to the airstrip, we board our private jet for a 45-minute hop to the world-renowned Masai Mara Reserve, which stands in the middle of the Great Rift Valley in southern Kenya.

The Keekorok airstrip is packed with foreign international tourists and local vendors in colourful traditional Masai costumes as well as four-wheel drive vehicles ready to take them on safari.

The clear blue sky, hot weather and strong sunlight remind me of an earlier holiday in Khao Yai but I snap back to the present as our friendly driver and guide Danish welcomes us with some refreshments. Simply called The Mara, the name of this popular game reserve means mottled in the Masai language and is a reference to its patchy landscape. Occupying 1,510 square kilometres, it stands between 1,500 to 2,170 meters above sea level and boasts extensive grassland and riverine forest with clusters of towering acacia trees.

I once again switch to a Toyota Land Cruiser and during catch sight of common zebras, thompson’s gazelles, topis (fast antelope) and ostriches on the open flat land as Danish takes us to the Little Sand River Masai Mara.

“The airstrip offers a spectacular view of the Sleeping Masai Mount that lies along the Sand River. This land can be divided into savanna and bushland. The buffaloes and zebras usually graze in every direction so be on the lookout,” Danish says.

“In July and August, the Masai Mara is the best spot to experience the annual migration across the Mara River from Tanzania to Kenya. From December to April, there is light rain, so some animals also cross into the Mara to graze.” Situated on the bank of the Mara River, we arrive at the tented camp just in time for lunch and are lucky enough to see a family of four lions crossing into Kenya from Tanzania. There are no electric fences but the hotel staff assure us we are perfectly safe as long as we keep our distance from the animals.

The camp has 16 tented rooms and a two-bedroom en-suite family tent that takes visitors back to the heyday of the exclusive permanent tented camps of the late 1920’s. I spend my two last nights in tent number 14, the interior design of which pays homage to the classic African adventures of Hollywood movies. It’s raining again so our game drive is cut short and we return to the camp. My tent has a super comfy bed and an en-suite bathroom complete with a vintage bathtub and separate toilet. There’s also an outdoor shower deck, from where I can see giraffes walking on the other side of the river.

In the morning, Danish leads us to the Masai village called Endasikira meaning a place that is raised. At the entrance, the villagers perform a traditional welcome dance before young guide Carl Leitato Naurori, 21 invites us to his home.

“In the past, we would perform a welcome dance when we were visited by residents of other villages,” Carl tells us.

Endasikira is home to 200 people from five families. They spent one month building their houses with a mixture of mud, cow dung, stones, grass, cow urine and ash. It’s dark inside the house and the ceiling is very low but it’s large with three bedrooms and a living area that double as kitchen and dining area room. In the centre of the village, young boys are gathering on the ground to perform the Masai Warrior Dance - two of them step out of the line and jump and other warriors will take their place when they return to the group.

“Every year, we host a competition on December 25, the day we normally celebrate the end of the year. The celebration will be extended to two days when we have a boy to be circumcised but if none of the boys are going to be circumcised, we will celebrate for just one day,” Carl says.

“The winners will be rewarded with 50 cows. Last year, a warrior jumped three feet off the ground and I won 20 cows. In the past, we would hunt and kill all kinds of animals like gazelles and impalas. We also hunted lions to prove our manhood and would hang the carcass outside for three days to celebrate our success.

“We stopped hunting a decade ago. We want to improve wildlife conservation for all Kenyans. We realise there’s no benefit in killing animals.”

That night, a lion comes worryingly near as we gather around the campfire. I’m terrified and dare not move.

“Don’t be scared. The lion isn’t interested in you because you’re skinny. He would rather eat a chubby man like me,” my companion jokes.

There’s a knocking on my door while I’m packing my bag early the next morning and I turn to find 10 large big baboons staring curiously at me. Danish wraps up the Skysafari trip with a morning game drive and we are able to get up close to a big family of one lion, two lionesses and nine cubs as they lie in the sun.

They start to move as other four-wheel drives approach from every direction and try to find the best spot to park. Only the cubs do not appear disturbed by the human company and continue playing as shutters click all around them.

“Lions have their first fight when they’re three year old. A male has a shorter life than a female, which can live for up to 16 years. The males get into lots of fights and that makes them weak,” Danish says.

“As the cubs grow up they’ll be chased out of the group to prevent breeding between siblings.”

We have nearly ended our tour but thanks to Danish’s sharp eyes and senses, we get to see a black rhino and a leopard hiding in the bushes.

Those sightings mean we have achieved our goal of seeing the Big Five and we can return home, our heads full of wonderful memories.

>> The all-inclusive Elewana SkySafari Kenya Connoisseur Package ranges from US$7,304 (Bt234,200) to US$10,056 during the mid-season. Check out the best rates at www.SkySafari.com

>. Find out more about Masai Mara Reserve at www.MagicalKenya.com.