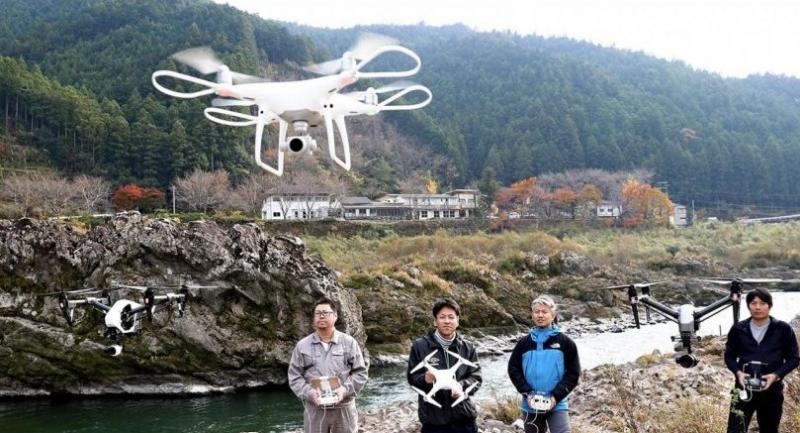 Surrounded by forests, Naka appears to drone enthusiasts who admire the views transmitted to their display screens./Japan NewsYomiuri

IN A QUIET mountainous area where rushing creeks and chirping birds used to provide the only usual sounds, there is now a mechanical buzz in the air. The source of the sounds is drones – small unmanned aerial vehicles flying over a town in Tokushima Prefecture.

The town, Naka, where the population has steadily been decreasing, is now being promoted as the place “where the largest number of drones fly in Japan” by seeking to turn its very lack of uniqueness to its advantage.

In late November at the B&G Yagai Katsudo Centre, a facility for outdoor activities surrounded by forests and streams within the town, three drones were gracefully flying in the bright blue sky.

They slowly made circles, rapidly ascended and showed off moves as if they were living creatures. Controlling the drones were officials of the municipal government’s drone-promotion office.

Hayato Tawa, 23, deputy chief of the promotion office, made an appeal, saying, “You can fly drones here in unlimited ways without worrying that they will hit buildings or people.”

In April 2016 the town became Japan’s first municipality to establish a section exclusively for drones. Surrounded by forests, Naka appears to drone enthusiasts who admire the views transmitted to their display screens./Japan NewsYomiuri

In 2017 the local government made a “drone map” that identified 25 spots suitable for flying drones, including a place that is good for seeing autumn leaves.

After it was released online, the map gained popularity via social media, and about 100 drone fans visited from all over the nation in the course of a year.

Hitomi Adachi, a 47-year-old company employee from Naniwa Ward, Osaka, who visited the town for the first time in September, said it was “different from Osaka. I can freely fly my drone in this great natural setting, and I never get tired of it, even when I fly it for many hours.”

Naka was created in 2005 as a result of a merger of five towns and villages. The population then was 11,596, but it has fallen year by year. The current population is 8,444, with residents age 65 or older making up 48.5 per cent. There are only two convenience stores in the town, which has no famous tourist spots.

Why did a town in such a condition decide to focus on drones? Naka has a map showing all the coolest places to send a drone aloft. /Japan NewsYomiuri

Drones attracted public attention in Japan in the wake of an incident in April 2015 in which a drone was found on the rooftop of the Prime Minister’s Office.

At the time, a man who had moved to and was living in the town as a member of local vitalisation cooperators happened to remark, “If it were in this town, a falling drone wouldn’t bother anybody.”

The Civil Aeronautics Law revised in the wake of the incident prohibits drone flights in “densely inhabited districts”.

However, Naka is a town where the population has been decreasing and forests account for 95 per cent of its acreage. Thus, there are few places in the town that are subject to the law’s regulation.

A plan to vitalise the local communities by using drones has proceeded smoothly. The central and prefectural governments have taken note of the efforts.

Naka was then designated a “special drone zone” by the prefectural government. In February 2016 Japan’s first experiment with using drones to deliver parcels to houses, which was organised by the Land, Infrastructure, Transport and Tourism Ministry and other entities, was implemented in the town as a measure to help people facing difficulties shopping.

Kunishige Takezaki, 79, who has been in the forestry business for many years, became interested in drones in the wake of hands-on events, and purchased one for about 150,000 yen in the summer of 2016.

“I feel as if I myself am flying while I watch the screen of the controller. This town where I have lived for many decades looks different when I see it from the sky.”

Drones are also utilised for the forestry business, the town’s main industry.

Usually, trees cut down in the mountains are transported to nearby roads using wires and ropes. It had been a heavy burden for workers to attach ropes to the trees while climbing up and down mountain slopes.

Now the ropes are attached to drones, which carry the ropes to the working sites, so work can be completed within several minutes.

Hirohito Kamei, 41, president of Kamei Ringyo, a Tokushima-based forestry company, expressed hope, saying, “Drones can wipe away the image that forestry work is too hard and can contribute to securing workers.”

The town has attempted to vitalise its local communities for four years. Although its depopulation problem cannot be solved quickly or easily, the sight of drones hovering in its skies gives the impression that the future holds unlimited possibilities.