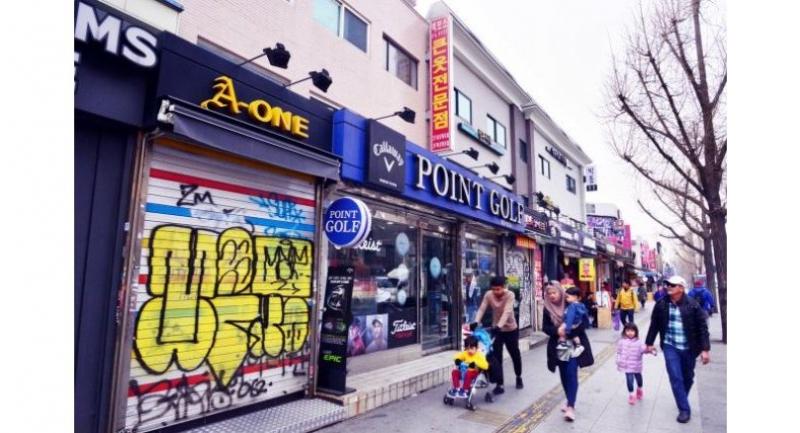 WILL AN expat-friendly neighbourhood in Seoul retain its charm amid a wave of gentrification? Some say Itaewon has lost its soul and is now just another hangout for young Koreans.

Others say the neighbourhood has become safer and trendier – suitable for a wider range of visitors. And, if you stand in the right place, you can still find the same expatriate-led culture thriving, they say. Whoever’s right, the debate is typical of what happens when neighbourhoods become gentrified.

Outsiders discover a less-developed area with unique characteristics and a vibrant local community. Money flows in, and trendier, fancier places pop up. Rents rise and many of the original residents and their favourite haunts are priced out.

“Itaewon was a rather run-down area for many years,” says Lance Reegan-Diehl, a Canadian who worked and lived in the area for nearly two decades.

“There were lots of reasons for that – no one knows exactly why – but the ‘small-town feel’ of Itaewon is gone.”

He was among the expats feeling the loss of once-famed bars, restaurants and shops, many of which were also run by expats. Franchise coffee chains, beauty stores and big fashion-brand outlets have replaced them and the area seems to draw more young Korean customers. Nestled in the shadow of the city’s central mountain Namsan, Itaewon had long enjoyed unparalleled status as the nexus of expatriate life in Seoul, with its close proximity to the US military base and a large number of foreign embassies.

In a socially conservative and racially homogenous country, the neighbourhood was unique in its striking cultural diversity and laissez-faire atmosphere, although some Koreans feared it to be infested with crime, says Moon Gwang-lip, a former journalist who’s written a book of essays on Itaewon and its foreign inhabitants.

“Itaewon was never sophisticated or high-brow, but it had raw elements of culture and community. The forces of gentrification appear to be eroding them,” he says.

What Itaewon is changing into is a tidier place with glossy shops that offer a not-so-different consumption experience for Koreans, he added.

The Korea Herald took a stroll down Itaewon’s main street last weekend from the landmark Hamilton Hotel through back alleys to the Seoul Central Mosque, up Antique Furniture Street and further north to nearby Gyeongnidan and Haebangchon.

The main street had steady but limited foot traffic from the direction of the Itaewon and Noksapyeong subway stations.

A casually dressed expatriate haggled with a street vendor over a fake Nike cap and then walked away.

“It’s difficult to make a living,” said the vendor, who declined to give her name. “Koreans don’t buy from my stall and not as many foreigners come here to shop anymore.”

Near the mosque, women in hijabs were grocery shopping at a halal supermarket while African expats casually chatted in front of a convenience store.

Intentional efforts are being taken by the Muslim community to preserve what has become known as “Islamic Street”, according to an official at the Yongsan-gu Office, who pointed out that an African community also makes its home in the area.

An Indian resident in Haebangchon said that, despite many changes, Itaewon still holds a unique charm for foreign residents and visitors.

“Of course it’s changed a lot, but Itaewon retains the same old charm that I fell in love with when I first came to Korea back in 2002.”

Yet Itaewon’s changes so far may look trivial once developers start tearing down old homes and rebuilding residential areas.

“Itaewon sits near those hot residential areas expected to get a major upscale makeover in the coming years. For better or worse, changes are inevitable,” said a local realtor.