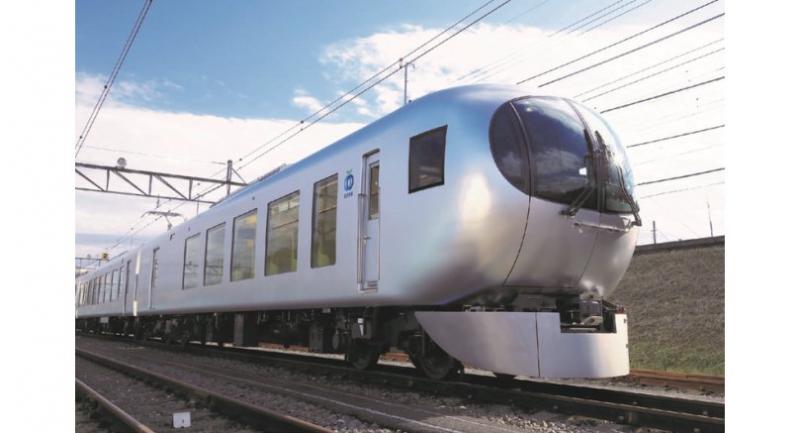 Japan’s Seibu Railway introduces its new limited express train “Laview”, the exterior and interior of which have been designed by world-renowned architect Kazuyo Sejima to develop a new :never seen before train car”.

The Laview's most distinctive feature is its rounded front end while its windshield is made of three-dimensional curved glass with a curvature radius of 1,500 mm – unprecedented in Japan. Cabin windows are furnished with large window panes, each 1,350 mm in height and 1,580 mm in width at equal intervals, enabling passengers to enjoy a panoramic view of passing scenery.

The exterior colour of the car, which uses new aluminium paint developed especially for Laview, is designed in such a way as to blend gently into the landscape, The interior, based on a warm yellow colour combination, creates a soft living room-like ambience. Each seat is equipped with electrical outlets and free Wi-Fi is available on each coach. Large 23-inch onboard video screens display information in four languages - Japanese, English, Korean and Mandarin. They all add up to provide amenities and make every passenger feel comfortable. As the new flagship train bearing the future of Seibu Railway, its train type is designated as the 001 Series.

Seibu Railway, which celebrated the 100th anniversary of its founding in 2012 and the 100th anniversary of its operations in 2015, is constantly coming up with innovations, including the Seibu Travelling Restaurant “52 Seats of Happiness” all dedicated to restaurant use as well as the “40000 Series” commuter train fitted with a “Partner Zone”, which can be comfortably used by all passengers, including small children and those using baby strollers or wheelchairs.