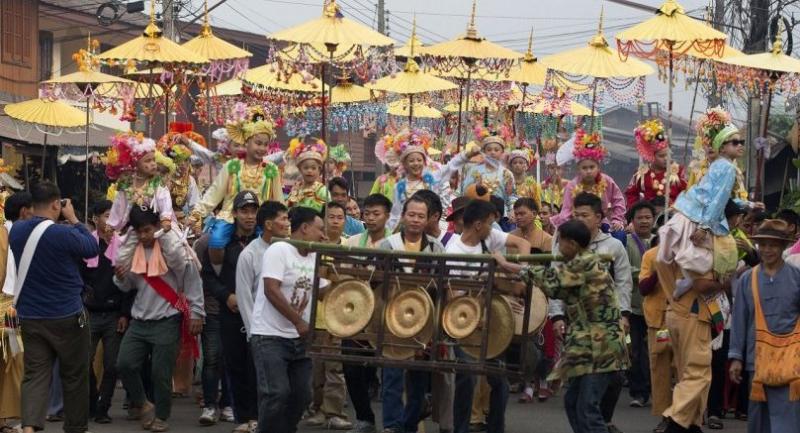 THE SUN has barely risen over the northern province of Mae Hong Son, but already the Tai Yai residents are out on the streets banging Lanna gongs and beating long drums to mark the beginning of the annual Poy Sang Long Festival.

The festival is centred on Wat Pha Bong Nuea, which serves as the main ceremonial venue and turns its pavilion into a dressing room for veteran and amateur make-up artists to groom the young boys who take part in the traditional ordination ceremony to become Sang Long (novice monks) in a tribute to Lord Buddha. The festival’s name is a combination of three Tai Yai words - Poy meaning an event and Sang, which is thought to come either from Khun Sang (Brahman) or Sang (novice monk). Long is derived from Along, meaning Bodhisattva or the king’s lineage.

In Tai Yai tradition, the novice monks don the very finest costumes as a symbol of Prince Siddhartha. Legend has it that King Ajatashatru hosted the ordination ceremony for his son to redeem his sins, while a folk tale focuses on a poor widow and her son, both disciples of Buddhism, who wanted to take part in an ordination ceremony hosted by the aristocracy.

Indra perceived their wishes and descended from the heavens using gold and silver waters to transform her son into a handsome prince. Brahman also gave him a crown and a gold breast chain and served as his godfather, hence the belief that the Sang Long is an adopted son of Brahman.

The celebrations are held during the long school break to ensure the Tai Yai boys have enough time to learn religious practices. Each ceremony takes three days and the kids will spend a few days memorising their lines for the ordination and undergo the tonsure ritual the day before the event. The Hub Sang Long Day starts with a bathing ritual, which sees the boys cleaning themselves in water mixed with acacia and full of precious gems and gold to bring them prestige. Dressed in white shirts and refined jong kraben, they head to the temple and attend a ceremony to ask for forgiveness and receive the precepts from the monks.

“Sang Long’s costumes are inspired by the clothes worn by the angels in the second heaven where Indra dwells. They dance to welcome Lord Buddha back to Earth,” says Tai Yai elder Jing Na.

“The Sang Long ceremony is more important for Tai Yai culture than being ordained as a monk because the kids are still innocent. This is regarded as making major merit. The procession of novice monks will usually start at 3pm or 4pm - the time when Prince Siddhartha departed his hometown to start his pilgrimage.”

The ceremony continues late morning with a colourful procession of men known as Ta Pae who carry the boys around the town on their shoulders The procession stops at several sacred places and at private houses, where villagers and elders offer the boys culinary delights and tie string around their wrists as a blessing.

The remarkable procession known as Kho Lu is the highlight of the second day. Here the boys dance while perched on the shoulders of the Ta Pae and local residents carry monks’ necessities to the temple, with an ancient statue of Mae Hong Son’s ruler perched on the back of a horse to serve as a guardian to protect the procession from demons. In the evening, Sang Long and celebrants will be entertained with Nok Ging Kara dances and other cultural performances.

In the evening, the Sang Long attend a ceremony during which string is tied around their wrists and feast on Kin Pak 12 Mee, a meal featuring 12 auspicious dishes while guests can enjoy a programme of cultural performances like the Nok Ging Gara dance. The sacred ordination ceremony takes place on the last day, which is called Wan Lu.

“According to Tai Yai beliefs, the families have to join the Poy Sang Long Festival when their first son is 10 years old though boys as young as seven can be ordained. They’re old enough to learn dharma. The novice monks can extend their status until they’re 20 if they don’t want to study in a formal school,” says Uncle Sophin Kaentun, who serves on the Ban Pha Bong committee.

“In the past, some Sang Long disappeared from the ceremony and we believed that the spirits tried to hide them from our eyes. The families now provide at least two guards to watch closely over the young novices even when they go to the bathroom.”

The Tai Yai descendants have managed to conserve their cultural heritage and the religious ceremonies are hosted to promote solidarity in their communities. Sang Long’s costumes are elaborate and each neighbourhood comes up with different designs. Up north on the border with Myanmar, the outfits are adorned with gold ornaments while residents of Mae Sariang district have adopted Lanna fashion. The original Tai Yai tradition only used breast chains and women cut their braids to decorate Sang Long hats to make merit. Today, the families spend around Bt100,000 to host an ordination ceremony. After the procession arrives at the temple, the parents will treat Sang Long to the Kin Pak 12 Mee feast.