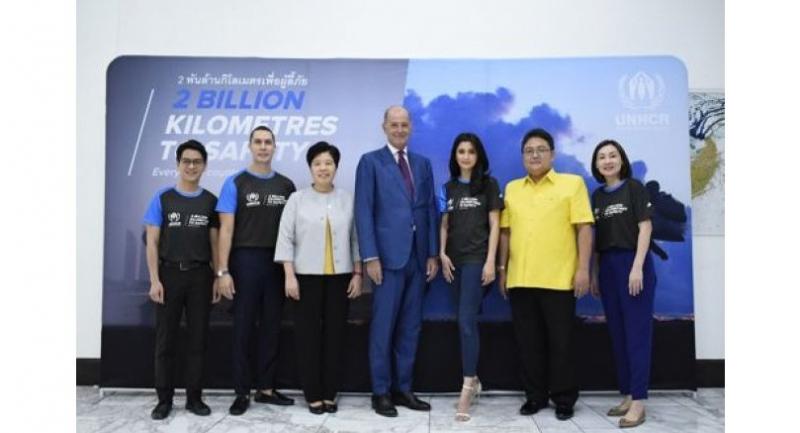 The Office of the United Nations High Commissioner for Refugees (UNHCR) launched its new global campaign in Thailand this week, calling on people to cover the distance travelled by refugees each year.

The “2 Billion Kilometres to Safety" campaign encourages people to support refugees by championing individual acts of solidarity. These acts, when taken together, acknowledge the resilience and strength of refugees.

The “2 Billion Kilometres to Safety” campaign invites people to act in solidarity and run, walk or cycle to achieve a cumulative total of two billion kilometres. Participants can use their fitness apps or the campaign website – www.Unhcr.or.th – to log the kilometres and contribute to a global total.

In Thailand, UNHCR introduces the campaign with a “2 Billion Kilometres to Safety” charity run to be held on June 16 on Rajdamnern Nok Avenue in order to commemorate World Refugee Day on June 20. The charity run is the first in a series of events organised by UNHCR’s corporate partners to accumulate the distance covered by Thai people and contribute to the campaign to show solidarity with refugees worldwide.

“Running, walking and cycling are well accepted in Thailand. This campaign will encourage Thai people to support refugees through something they are already doing,” said Giuseppe de Vincentiis, UNHCR representative in Thailand. “At a time of record high global displacement, it is vital that we remind ourselves of the real and dangerous journeys they are forced to take.”

Thailand is one of 27 countries across Africa, Asia, Central and North America, Europe and the Middle East taking part in the campaign, including individuals, celebrity supporters, refugees and UNHCR personnel.

“Refugees do not have a choice and must take dangerous journeys to seek safety for their own lives and those of their loved ones’,” says UNHCR Goodwill Ambassador Praya Lundberg. “To show solidarity with refugees, I will start by running at the 2 Billion Kilometres Charity Run to step with refugees and ask all Thais to join me.”

Tickets are available at Bt550 and Bt1,000 and can be purchased at www.Unhcr.or.th. All proceeds will go to support refugees with registration and reception services, food and water, shelter, basic aid, healthcare and psychological support.

Tags:
The Office of the United Nations High Commissioner for Refugees (UNHCR) “2 Billion Kilometres to Safety Your legs Thailand Thailand this