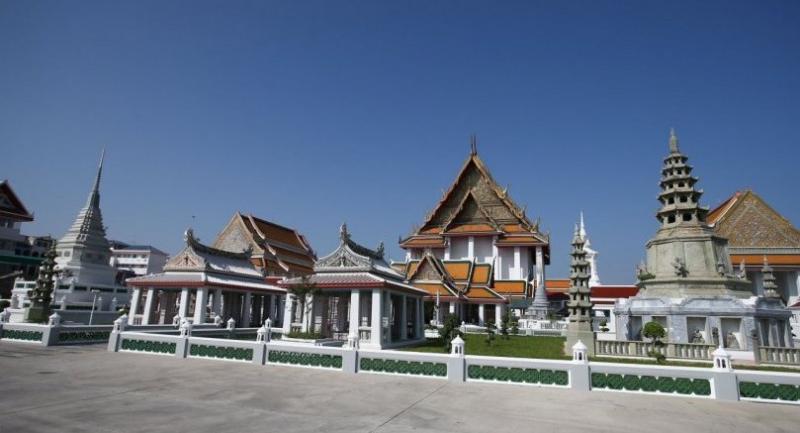 Wat Kanlayanamit Woramahawihan is home to a huge statue of Phra Buddha Trai Rattanayok created during the reign of King Rama III.

With fewer visitors but lots of interesting attractions, Thon Buri is the perfect place to spend a day

LINED WITH ancient temples, mosques, shrines and churches, Thon Buri is home to a broad mix Chinese, Muslim, Buddhist and Christian residents who have lived happily in harmony here for more than 250 years. The former capital of Siam, it’s still a great place for visitors, both local and foreign, to spend a day observing the traditions of the old riverside communities and looking back at what the area was like in the old days. Wat Kanlayanamit Woramahawihan is home to a huge statue of Phra Buddha Trai Rattanayok created during the reign of King Rama III.

The elegant Throne Hall, the apartments of King Pinklao and the Whale Head Shrine have been maintained although today, the palace serves as the headquarters of the Royal Thai Navy. It will open its doors to welcome the public in December but also allows visitors by appointment.

Older than King Taksin’s palace is the Wichaiprasit Fort, formerly known as the Wichayen Fort. It was built in the reign of King Narai the Great and was a stopover for sea merchants from China, Portugal, France and India during the Ayutthaya to early Rattanakosin periods.

A stone’s throw away is Wat Kanlayanamit Woramahawihan, an attractive mix of classic Chinese-Thai architecture and home to Thailand’s biggest bell. Sitting at the mouth of Bangkok Yai canal, Chao Phraya Nikon Bodin donated his house and land in 1825 to build this temple as a tribute to King Rama III.

In 1837, the main hall was constructed to enshrine the gigantic statue of Phra Buddha Trai Rattanayok, which is inspired by the Sam Por Kong Buddha statue at Wat Phanan Choeng in Ayutthaya. Local pilgrims come here to ask for success in business, safety and good friends. The 100-year-old Guan Yin statue is the centrepoint of Kuan An Keng Shrine.

“King Rama III and Chao Phraya Nikon Bodin were close friends. They did business together, so King Rama III named this temple Kanlayanamit (which actually means good friend in Thai) to represent their relationship,” says Thanat Bhumarush, a tourist officer with the Bangkok Tourism Division of the Bangkok Metropolitan Administration, who serves as a guide on our tour, organised by Iconsiam.

“King Rama III renovated several temples around town, adopting classic Thai and Chinese style architecture and focusing on simple elegance. For example, this temple only has the gables and hang-hong decorative ornaments at the centre.”

A short walk from Wat Kanlayanamit is the 240-year-old Kuan An Keng Shrine, which was recently designated a historical site by the Department of Fine Arts. Built by the descendants of Hokkien immigrants, this shrine is home to an old statue of Guan Yin carved out of fragrant wood and brought from China as well as a collection of beautiful gold Buddha images attired in floral robes crafted in the reign of King Rama III.

“This area was inhabited by Chinese residents from the mid to late Ayutthaya period. According to Prince Damrong Rajanubhab’s letter written in 1930 while visiting Wat Kanlayanamitr, the river was dotted with floating homes,” says Boonyanit Simasathien, the fourth generation of the Simasathien family that has been responsible for taking care of the Kuan An Keng shrine.

“Initially, this land was home |to a compound of two shrines built in the Thon Buri period, which fell into disrepair. Our Hokkien ancestors moved here and constructed a new building to enshrine the man-like statue of Guan Yin. The legend has it that Mercy goddess was a monk, who transfigured himself into a beautiful angel to help humans.”

The shrine itself is currently undergoing extensive restoration but visitors can still see some of the unique Hokkien-style murals and fine woodcarvings depicting Chinese legends of the Three Kingdoms. “The Fine Arts Department |has spent millions restoring |the architecture here, including |the powder paintings on the walls and wood carvings damaged by bats and humidity. We’ve used special cement made from animal glue, sugar cane juice and sand to reduce the heat,” says Teeranun Mandee, art technician of the Fine Arts Department.

Not far from the Guan Yin shrine is the Kudeejeen community that dates back to 1767 when King Taksin established the Thon Buri Kingdom and allocated the land to Portuguese migrants. Its name means the “Chinese monks’ abodes” in Thai.

Spread over narrow sois behind the Santa Cruz Roman Catholic church, the area is famous for kanom farang kudee jeen, a cupcake-like pastry that is soft on the inside but crispy on the outside.

We take a break from the heat in a shady cafe on the ground floor of the Baan Kudeejeen Museum. Opened two years ago by Navinee Pongthai and her family, this three-floor wood house boasts classic Thai-Portuguese style architecture and a striking exhibition detailing the history of Portuguese communities from the Ayutthaya era to present days.

“I retired from my job and wanted to find a hobby. I bought this house from my cousin and turned it into a community museum so that our young generation can come and trace their roots. This neighbourhood was surrounded by the river and we used to enjoy fishing blue prawns,” Navinee says.

A time capsule of bygone |days, the third floor has a living room, bedroom and dining room furnished with old wood furniture, zinc kitchenware and ceramic tableware, plus some collectible books and letters. “Portuguese houses tend to be airy with high ceilings and several windows that allow the air to flow. Unlike in Thai houses, there’s no shrine room but the biggest altar is installed in the master bedroom,” Navinee says.

Next door is Baan Chantanaphab, which welcomes tourists and students interested in Thai architecture and culture.

This 125-year-old teak house is today in hands of 77-year-old retired teacher Charupa and her husband. It showcases the traditional techniques of wood joints and boasts a front frame constructed in rising sun style and windows embellished with carved Puttan flowers.

“We’ve opened our house to help promote tourism in the community. Made from teak and takien, it has a gable roof and on the walls, you can see the holes made by bullets fired during the Mahattan Rebellion of the Royal Thai Navy in 1951,” Charupa says.

Back on our boat, we head to Wat Hong Rattanaram, which was built in the Ayutthaya period. The main hall underwent major renovations during the reign of King Rama III and is now enshrined with an ancient black statue of Phra Saen brought from Champasak province in southwest Laos.

“Phra Saen is a mixture of bronze, brass, zinc and gold. It comes in the posture of subduing the mara and has a flat nose with a skinny body. The bottom of the stairs is decorated with a couple of three-legged toad sculptures, representing wealth according to Chinese beliefs,” guide Thanat explains. Baan Chantaphab is a showcase of classical Thai architecture.

The wall paintings were recreated a decade ago, depicting the story of Lord Buddha and above the windows, visitors can now admire beautiful old paintings on glass recounting the legend of the Emerald Buddha image.

Another hall is home to an ancient gold Sukhothai-style statue of Luang Poh Thong Kham. Initially, it resembled an Ayutthaya-style Buddha statue but during the restoration in the reign of King Rama IV, its white shell cracked and revealed its real form.

We end our sightseeing tour at Suvarnabhumi Mosque in Klong San district, a simple but elegant edifice with a display of walking sticks adorned with mirror glass that King Rama IV gave to Imams around the country. The sticks glitter in the light given out by the attractive lamps used in King Chulalongkorn’s royal cremation ceremony.

Tags:
Thon Buri The other Bangkok