The Murakami City Skate Park, which opened this spring./ The Yomiuri Shimbun photo

The objective is to try to increase the number of tourists — and even attract new residents — by promoting their areas as Games venues and by developing new facilities.

Tsurigasaki Beach in Ichinomiya, Chiba Prefecture, is crowded with beachgoers and surfers in summer. The "Surfer Street" along the coast, lined with shops and restaurants, is a famous surfers’ gathering spot that attracts 630,000 visitors a year. However, with enthusiasts describing it as "not as well known as Shonan" — a popular surfing area in Kanagawa Prefecture — lack of recognition was seen as a weak point.

Now the Tokyo Olympics is attracting attention to the town. In 2016, when surfing was officially added to the Olympic program, the town launched a special website, ichinomiya-surftown.jp. That year, the beach was chosen as the 2020 Olympic surfing venue. The town touts its waves as stable throughout the year, saying they can be enjoyed by beginning surfers as well as advanced ones. 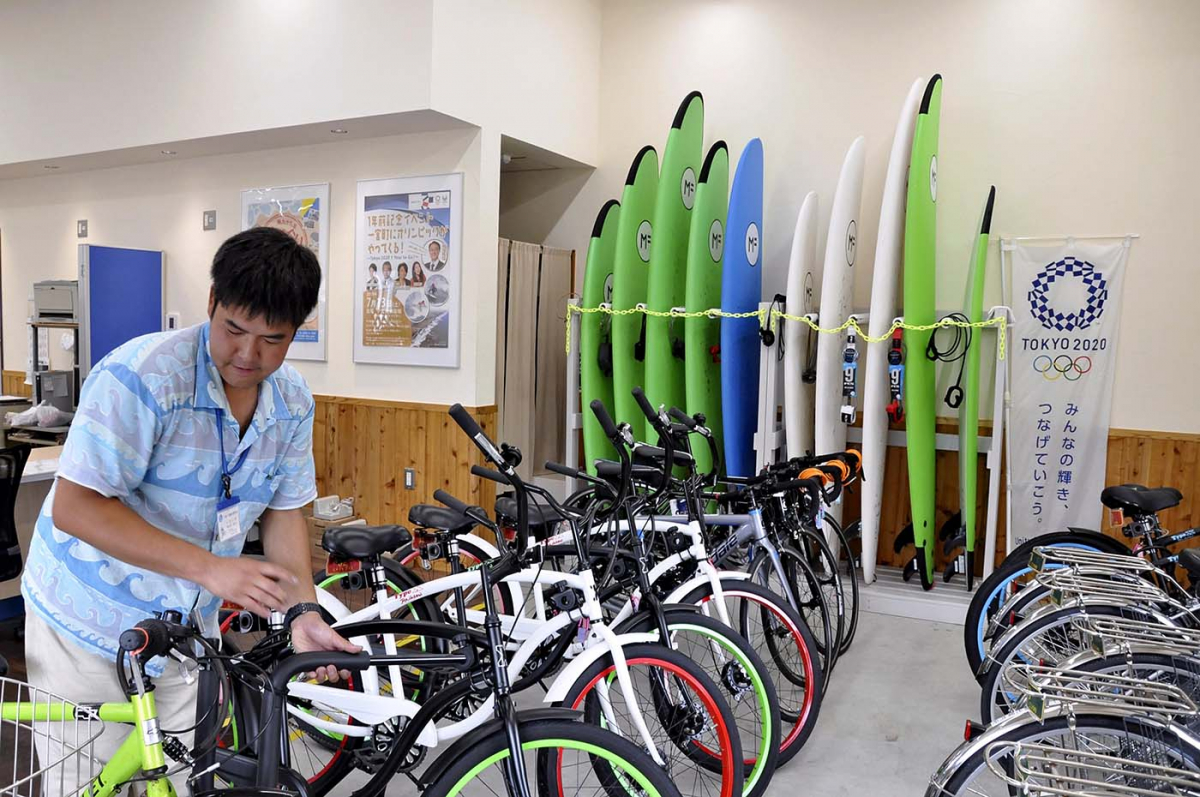 To attract people to visit or live in Ichinomiya, the town government established a community planning company in August 2016 in cooperation with the private sector. It rented vacant shops in the center of the town and invited some businesses, including a ramen shop, from outside the town. In 2018, it began renting surfboards, and bicycles equipped to carry boards to the beach, at a tourist information center in front of JR Kazusaichinomiya Station.

The decline in the town’s population was reversed in 2018. The number of children at an elementary school near the seashore increased by 20 percent to 148 this spring. The challenge is to ensure that more residents settle down in the area in the future. "It’s necessary to take measures to allow people to settle down for good, instead of just having temporary popularity," a town official said.

From snow to cement

Murakami, Niigata Prefecture, is aiming to become a "sacred place" for skateboarding, which also was officially approved as a new sport in 2016.

Murakami is the hometown of snowboarder Ayumu Hirano, 20, who won silver medals in the halfpipe at two consecutive Winter Olympics. When Hirano announced that he would try for the Tokyo Olympics in skateboarding, there was a growing sense of excitement in the local community.

This spring, the city built an indoor facility, Murakami City Skate Park, at a total cost of about ¥1.55 billion. The facility has a bowl-shaped "park" designed for international competitions, and a "street" with stairs and pipes. In May, the National Championships were held there, and in June, the Indonesian national team used it for a training camp.

More athletes are being trained there, and use by the public has expanded. "It’s an enriched environment. I want to practice a lot and participate in a big competition," said Mundo Sato, a first-year junior high school student from Niigata city, who took part in a trial class.

In October 2018, the town government of Samukawa, Kanagawa Prefecture, built a facility for BMX cycling and other sports, called Pumptrack Samukawa, in a town park. In April this year, an international sports event including BMX races was held there, attracting 25,000 visitors in three days, a figure equivalent to more than half of the town’s population. The municipal government succeeded in attracting the event, previously held in Kobe, by promoting the Pumptrack.

Some townspeople are seen as promising candidates for the Tokyo Olympics. The town plans to increase the number of participants by offering classes and events for beginners.