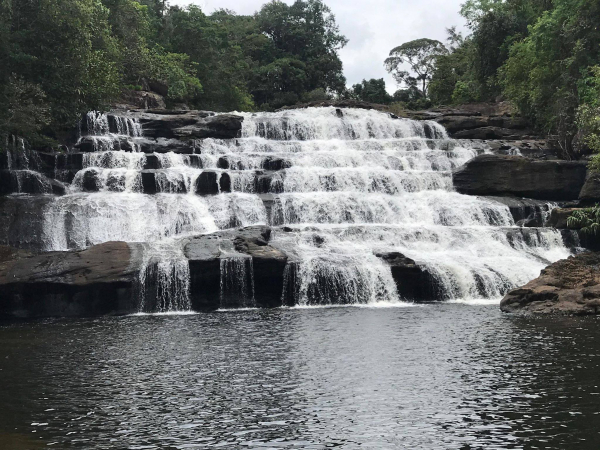 Tad Xai and Pha Xay waterfalls are conveniently close to each other./Vientiane Times

In training for a Vangvieng Trail hike at the end of this year, my friends and I would normally walk along the Mekong riverbank to prepare for such an event but one recent weekend we decided to try somewhere different.

Out of the many places we considered, we settled upon the Tad Xai waterfall at Ban Hatkhai in Borikhamxay province, which lies within the Phou Khaokhouay National Protected Area.

Reached by travelling on Road 13 South, it’s near the border between Vientiane and Borikhamxay province, and is about three hours drive from Vientiane.

We chose this place because we heard that trekking guides are available, which we thought was a good idea because we were by no means experienced trekkers.

I have been to Tad Xai a few times before, but mostly just to have a picnic and enjoy the waterfall, which is one of the most beautiful of the many that are to be found in the national protected area. This was the first time I would be able to explore the area more fully.

We arrived at Ban Hatkhai around 10 am where a local tourist officer was waiting to guide us on the walk. The fee for each of us was 45,000 kip. It was several kilometres from the village to the park itself and some sections of the road were quite rough. Drivers would need a vehicle with good clearance or four-wheel drive.

We arrived at the parking place which was shaded by large trees and bordered by a stream which burbled through various shaped rocks. It would make a good picnic spot and you could also have a dip as the water was not at all deep. A sign pointed the way to Tad Xai waterfall, which could be found at the end of a 400 metre path.

But we were intent on having a long walk so we went in another direction along a small trail which passed through woods, so the tree canopy protected us from the hot sun.

We quickly became immersed in our environment and stopped to look at the unfamiliar plants and flowers that we encountered in profusion.

Our surroundings were so enjoyable that we walked slowly and took loads of photos, forgetting that the purpose of the expedition was to get in training for the strenuous Vangvieng Trail. Never mind, the whole experience was all part of the goal, we told ourselves.

After a while we heard the unmistakable sound of a waterfall, which soon came into view. The water cascaded down from a high cliff, so it is aptly named Pha Xay waterfall, or cliff waterfall. It was one of those hidden gems that you would only encounter by walking deep into this scenic area.

After lingering for a while to enjoy the view and taking more photos, we continued on our way through more oddly-shaped trees and plants and then came to an open field of green grass interspersed with rocks.

Then we were back in the forest again, walking through small and large trees, listening to the sounds of insects and birds against the backdrop of faraway waterfalls, and observing the strange plant life around us. We became engrossed in our surroundings and never had time to feel tired. Now and again we saw groups of colourful butterflies, and stopped to relax near a small stream.

The many streams that traverse the park meant we sometimes had to walk across wooden bridges and near the end of the trail we came upon a mass of different sized boulders piled up on top of each other alongside a large stream overhung with dense foliage.

The tall thick trees were a wonderful sight and created a calming atmosphere so we took a long break and breathed in the smells. We felt we had earned a rest as this was the first trek we had made in this kind of environment.

From here we took a different path back, which led us to the main Tad Xai cascade where most people come to enjoy a picnic.

The waterfall has seven levels over which pours a torrent of foaming white water on its way through Phou Khaokhouay, creating a spectacular sight.

This made another great rest stop and we loitered here for some time before making our way back to the parking area, deeply satisfied with our achievement and our decision to visit this awe-inspiring area.