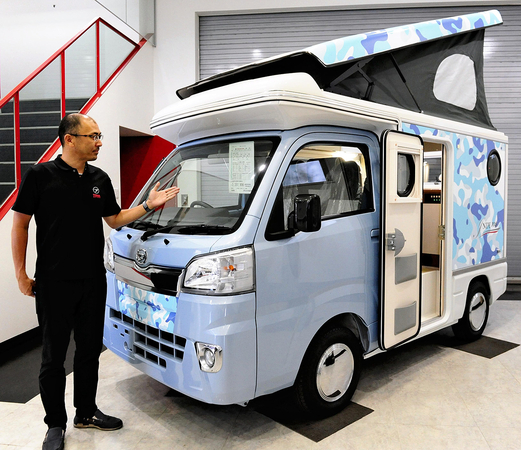 Light campers such as this one displayed in Suginami Ward, Tokyo, are popular among senior citizens./The Japan News photo

Light vehicles modified into campers are having their moment, as they are cheaper than full-sized models and are seen as easier to drive.

There were 2,281 registered light campers in 2018, an almost four-fold increase from 10 years ago. Many owners are retired couples who want an easy way to travel around the country.

Towa Motors Co. in Suginami Ward, Tokyo, sells light campers equipped with seats for four people in the Hijet light truck made by Daihatsu Motor Co. The model has a roof that opens to create enough space for four adults to sleep, as well as a sink and other features.

"It’s attractive because it can also be put to everyday use. In addition, it’s becoming a popular tool for enjoying hobbies like hiking, photography and fishing," a Towa Motors’ official said.

This model is priced at about ¥3 million, which is around half the cost of a regular camper.

Light campers began to attract attention in the late 2000s when the baby boomers started retiring. Owners can travel more frequently if they save money by staying in the vehicle. They can also travel with pets without having to worry about other people.

It is said that sales are also being driven by the boom in popularity of solo camping.

Light campers make up only about 2 percent of all registered campers, according to the Japan Auto Camping Federation.

Light vehicles are mainly used for short distances and have not been considered suitable for long trips.

However, Honda Motor Co.’s N-Box, the best-selling light vehicle in the country, and Nissan Motor Co.’s Dayz have a function that maintains a suitable distance between cars. "Light vehicles also have plenty of safety assist functions that make driving easier. I think they’ll receive more attention going forward," a person in charge of the matter at the Japan Recreational Vehicle Association, which represents camper dealers, said.