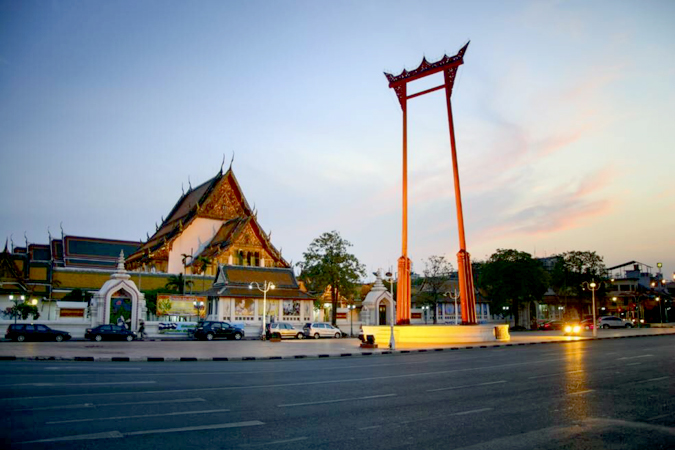 Bangkok has again grabbed the No 1 spot in Mastercard’s annual Global Destination Cities Index, with more than 22 million international overnight visitors in 2018, up from 21.1 million in 2017.

This is the fourth consecutive year that the Thai capital has grabbed the top spot in the global index, which ranks cities in terms of the number of international visitor arrivals, cross-border spending, and other factors. It is also the ninth consecutive year that Bangkok retains the No 1 position in Mastercard's Asia-Pacific Destinations Index (APDI).

Two other Thai destinations – Phuket and Pattaya – also made the Asia Pacific Top 10 for international arrivals, coming in at seventh and eighth, with 9.9 million and 9.4 million visitors, respectively. 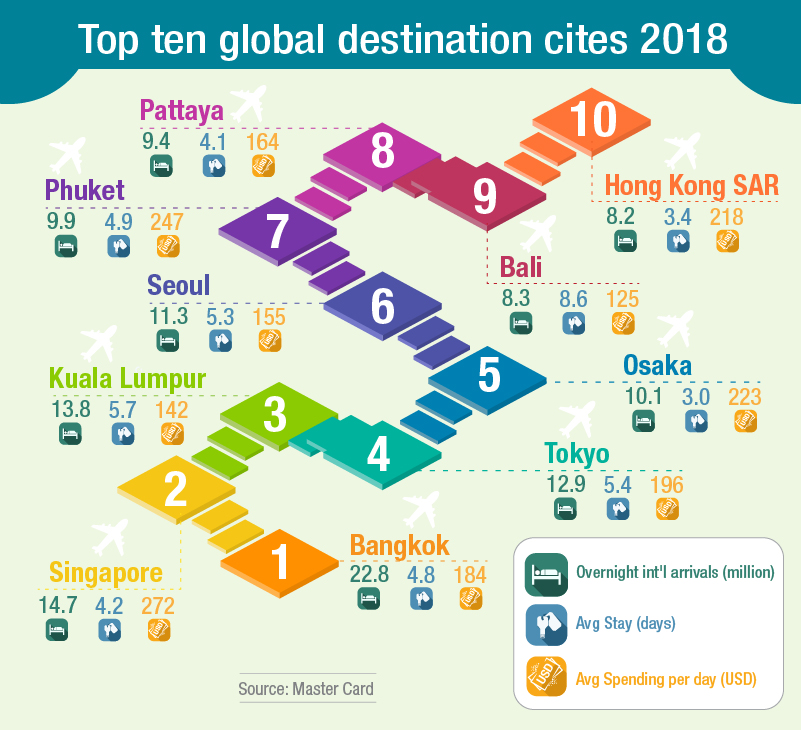 This makes Thailand the only country with three destinations in the Asia Pacific Top 10.

The APDI said Thailand is again the No 1 destination for mainland Chinese travellers, with 27.1 per cent choosing it as their Asia-Pacific country of choice, followed by Japan and South Korea. Thailand also emerged as the No 1 destination in the region for overnight visitors from Malaysia and India.

Results also showed that Thais are increasingly travelling in the region, with Malaysia the most visited country, followed by Japan and Laos.

“Mastercard is proud to be actively supporting growth of the tourism industry in the country, which offers every visitor world-class hospitality, rich cultural heritage and a range of diverse experiences,” said Aileen Chew, country manager for Thailand and Myanmar. “This year, Mastercard launched two new programmes to promote tourism in Thailand – ‘Destination Thailand’ and ‘Priceless Bangkok’ – which seek to introduce the world to the incredible beauty and warmth that Thailand has to offer.”

Overall results from the APDI show that the five most popular destinations for international travellers in the Asia Pacific in 2018 were Bangkok, Singapore, Kuala Lumpur, Tokyo and Seoul, which together welcomed more than one-fifth, or 22 per cent, of all visitors to the region. Primarily driven by explosive growth in outbound travel from mainland China, these five cities are also capturing more than one-quarter, or 25.2 per cent, of total international travel spending in the region.

Since 2009, overnight arrivals by mainland Chinese travellers in markets across the Asia Pacific surged from 10.5 million to 62.4 million in 2018, representing a 21.9 per cent compound annual growth rate over the period. Mainland China is among the top three source markets of outbound travellers for 82 cities in the Asia Pacific, or more than half of the 161 destinations in the APDI.

In 2018, the Asia Pacific hosted travellers making 342.2 million business and leisure trips, up from 159.1 million in 2009, representing an 8.9 per cent annual growth rate over the nine year period. During the same period, travel spending in the Asia Pacific more than doubled, rising from US$117.6 billion to $281.1 billion (Bt8.6 trillion), equating to a compound annual growth rate of 10.2 per cent.

“While the world’s economic, geopolitical, technological and societal landscapes have all changed dramatically since Mastercard launched this research 10 years ago, one thing has remained constant: the desire of ever-growing numbers of people to explore the world beyond their own borders,” said Rupert Naylor, Mastercard senior vice president, data & services, Asia Pacific. “With the top 20 cities attracting nearly half (49.8 per cent) of all international overnight arrivals to the 161 destinations ranked in the APDI, it is important to understand not only how continuously rising travel numbers impact cities and destinations for the better, but also the challenges they pose. This equips governments, merchants and the global travel industry with the information and insights they need to better serve their residents and visitors.”

The APDI ranks 161 cities based on proprietary analysis of information from third-party sources such as the World Travel & Tourism Council, the International Air Transport Association, the United Nations, the World Trade Organisation, the International Monetary Fund and national tourism boards. Public data is used in deriving the international overnight visitor arrivals and their cross-border spending in each of the 161 destination cities. Forecasts are based on the weighted average of national tourism forecasts and actual 2019 monthly data at the destination level. This Index and all accompanying reports are not based on Mastercard volumes or transactional data, the company said.