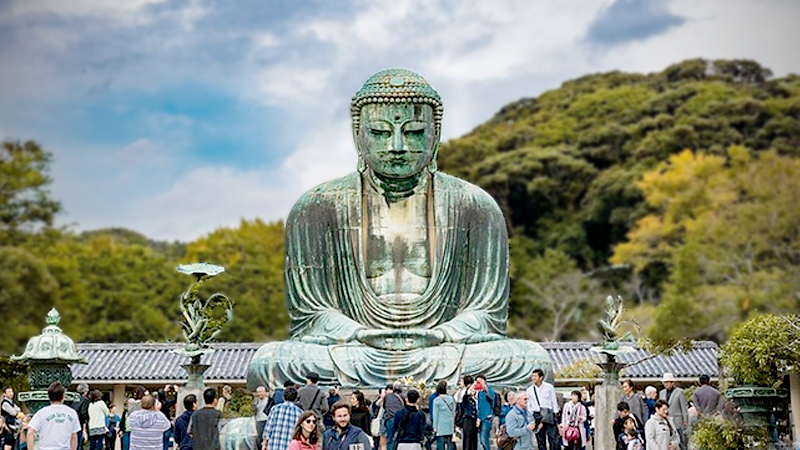 The Great Buddha of Kamakura, a major tourist attraction in Kanagawa prefecture

A surge in foreign visitors and overtourism are increasingly causing problems for local Japanese residents.

In Hokkaido, there have been complaints about foreign tourists trespassing on agricultural land, and many communities have had to deal with problems such as harmful behaviour, littering and severe traffic jams. Local governments and residents are struggling to handle the situation.

“If pathogens or pests stuck to people’s shoes are brought into the fields, I can’t calculate the damage it would cause to crops,” said a 35-year-old man who runs a farm in Biei, Hokkaido. More than 2 million people visit Biei each year to see its wide-open, hilly scenery.

About 400 farmers cultivate about 10,000 hectares around the hills that are popular with tourists. Recently, bus guides have been seen leading foreign tourists into fields so they can take better pictures to post on social media. There have also been problems with tourists flying drones without permission.

In June, about 30 incidents were reported to a website the town government and others set up so people could file complaints. Not wanting their fields to be damaged any further, some farmers have reportedly cut down poplar and Japanese larch trees that were popular with picture-taking tourists.

Stakeholders are considering carrying out patrols in Biei and reporting trespassing on agricultural land to the police.

“We want many people to enjoy our beautiful nature, but if farmers’ way of life is threatened we may have to take strong action,” said an official of the Biei Vitalization Association.

In 2018, Japan had 31.19 million foreign visitors, a record high for the sixth year in a row. The government wants the country to be an attractive tourist destination and hopes to reach 40 million foreign tourists by 2020.

However, friction has started to appear between tourists and the communities they visit. In Kyoto, foreign tourists have chased after and stood in front of maiko and geiko performers trying to take their picture, pulled kimono and caused other annoyances.

Since September 30, the city has been calling for better manners via a map app that many foreign tourists use to navigate old ochaya restaurants where maiko and geiko serve customers in the Gion district.

“Tourists who treat private property like a theme park make residents uneasy. We want them to display good manners while experiencing history and culture,” said the head of the city’s tourism MICE promotion office.

Kamakura, Kanagawa prefecture, is visited by about 20 million people per year. On weekends and holidays there are often serious traffic jams around sites such as Tsurugaoka Hachimangu shrine and the Great Buddha of Kamakura.

According to the city, the average speed of vehicles was about 18kph in fiscal 2017. The congestion has delayed ambulances. The city is considering instituting “load pricing” to regulate traffic by charging vehicles to drive on certain roads.

Dazaifu Tenmangu shrine in Fukuoka prefecture has also had its share of problems, with foreign tourists being noisy on the path up to the shrine and littering.

In April, the prefectural government published a “manner comic” on its homepage in English, Korean and other languages, instructing people how to pray at the shrine and to not leave any garbage behind.

The most common answer was “improperly using toilets” at 25.4 per cent, followed by “littering in residential areas and public spaces” at 20.3 per cent and “going into off-limits areas without permission” at 15.9 per cent. Multiple answers were allowed.

The agency is creating videos to instruct foreign tourists on manners, such as how to get on and off trains, and etiquette for taking pictures.

It is also creating a “tourism index” to numerically express the economic effects and negative impacts of tourism on communities, which municipalities could use in their tourism policies.

“Regulating tourist behaviour has its limits. People need to skillfully explain their local nature and culture, and think of ways of asking for cooperation,” said Akiko Kosaka, senior researcher at the Japan Research Institute Ltd.