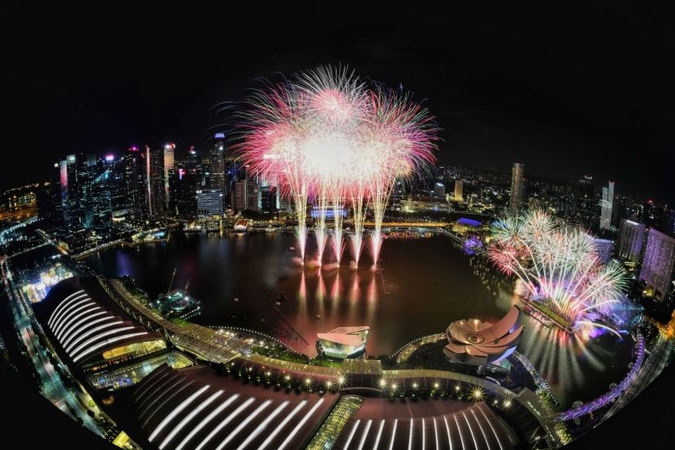 By Clara Chong
The Straits Times

A musical from Japan involving fireworks and 500 drones will make its debut on New Year's Eve at The Float @ Marina Bay, a 90-minute-long show that will also include unicyclists and ballet dancers.

Doors to the musical will open at 5pm, and the event will also feature a family-friendly entertainment zone and a food village. Tickets to enter the musical area are priced from $88.

Another highlight is a circus performance presented by Uncle Ringo. The Great Circus of Europe treats the audience to jaw-dropping circus acts and stunts. Entrance is priced from $70 to $150, with the first show starting at 4pm at Bayfront Event Space.

Those not keen to watch the circus can indulge in carnival games and rides, and check out 50 food and retail stores at the Escapade Festival Village, which is located in the same area. Admission is free.

Over at The Lawn @ Marina Bay, an array of activities, such as bouncy castles, arts and crafts booths, roving performances and magic shows, will be available tomorrow to the public from 5pm.

Celebrations to usher in the new year started earlier at other places.

From last Thursday, The Fullerton Hotel's facade has been lit up with artworks created by beneficiaries from Beyond Social Services and Shine Children and Youth Services.

Revellers can also join a 1,000-strong group at the Singapore Flyer waterfront promenade on the last night of the year. The local youth musicians will be attempting to break the Guinness World Record for the largest-performing rock band in the afternoon.

Partygoers can then stay on for a countdown concert from 10pm which will feature performances by various local schools.

Celebrations have also extended to the Civic District, with Connaught Drive set to be transformed into a pet's carnival from 4pm. There will be an all-day picnic area and a line-up of pet activities and competitions for pet owners.

Road closures and security measures will be in place for the countdown activities, which saw a crowd of around 500,000 last year.

Roads such as St Andrew's Road, Connaught Drive and part of Fullerton Road will be closed to traffic from 4pm on New Year's Eve until 5am the next day.

Security personnel, including police officers, may also conduct checks on the public, including their bags and personal items.

Officers will also be deployed to manage crowds and pedestrians are advised not to congregate at footways along areas such as Esplanade Bridge and Bayfront Avenue to prevent overcrowding.

The footway on Benjamin Sheares Bridge will also be closed from 5pm tomorrow to 2am the next day.

For more information on the full programme, go to www.marinabaycountdown.sg