Léon de Lyon - founded in 1904 by Léon Déan, whom esteemed food critic Curnonsky called a king of cooks in his 1935 guidebook - features a casual bistro, a gastronomic restaurant and a cozy contemporary bar. MUST CREDIT: Washington Post photo by Sylvie Bigar

With cues from a famed French critic, testing Lyon's culinary eclat. Mention Lyon, France's third-largest city, and Francophile food fans perk up. Thanks in part to its location at the heart of France's agricultural larder, Lyon has always enjoyed a glowing reputation as a gastronomic hub. 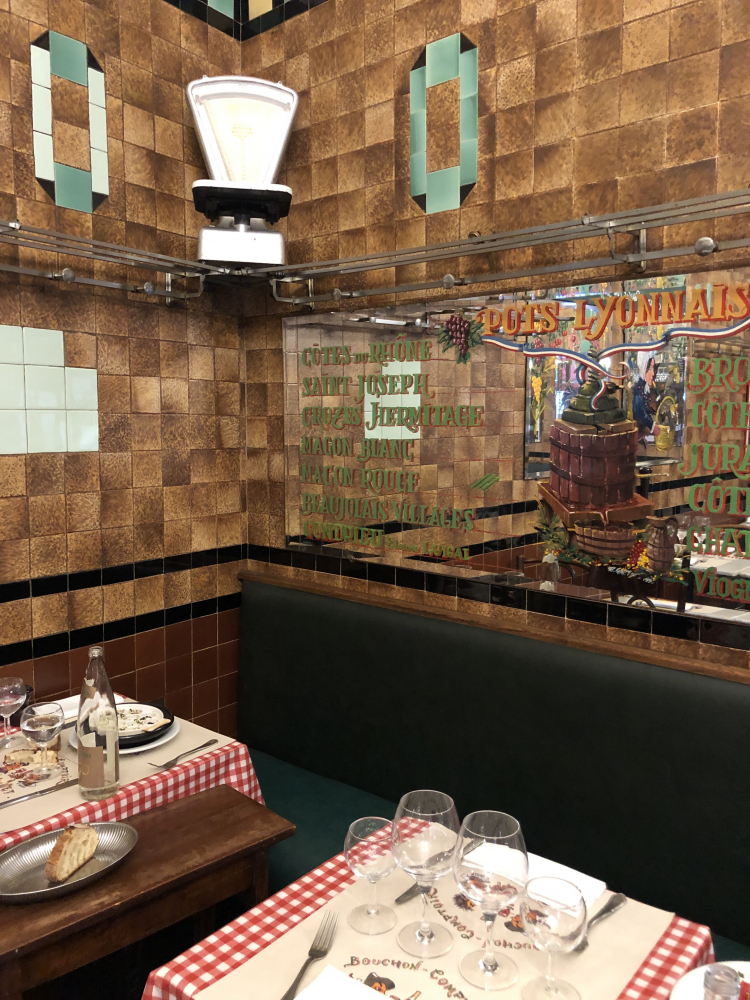 But things heated up in 1935 with the release of a guidebook titled "Lyon, Capitale Mondiale de la Gastronomie," penned by esteemed food critic Curnonsky with writer Marcel-Etienne Grancher. As famous for his poetic culinary musings as for his colossal appetite, Curnonsky (alias the Prince of Gastronomes) was one of the first writers to espouse the concept of culinary tourism. 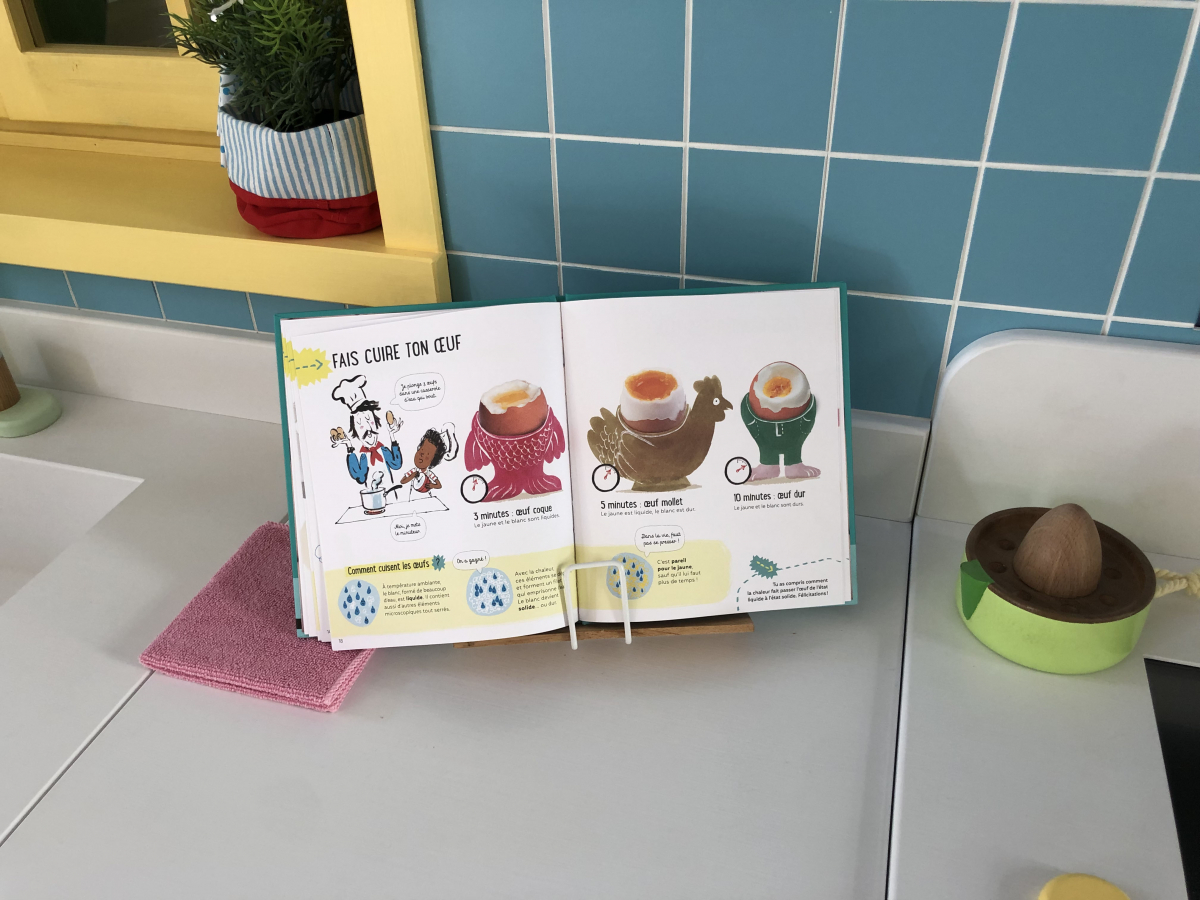 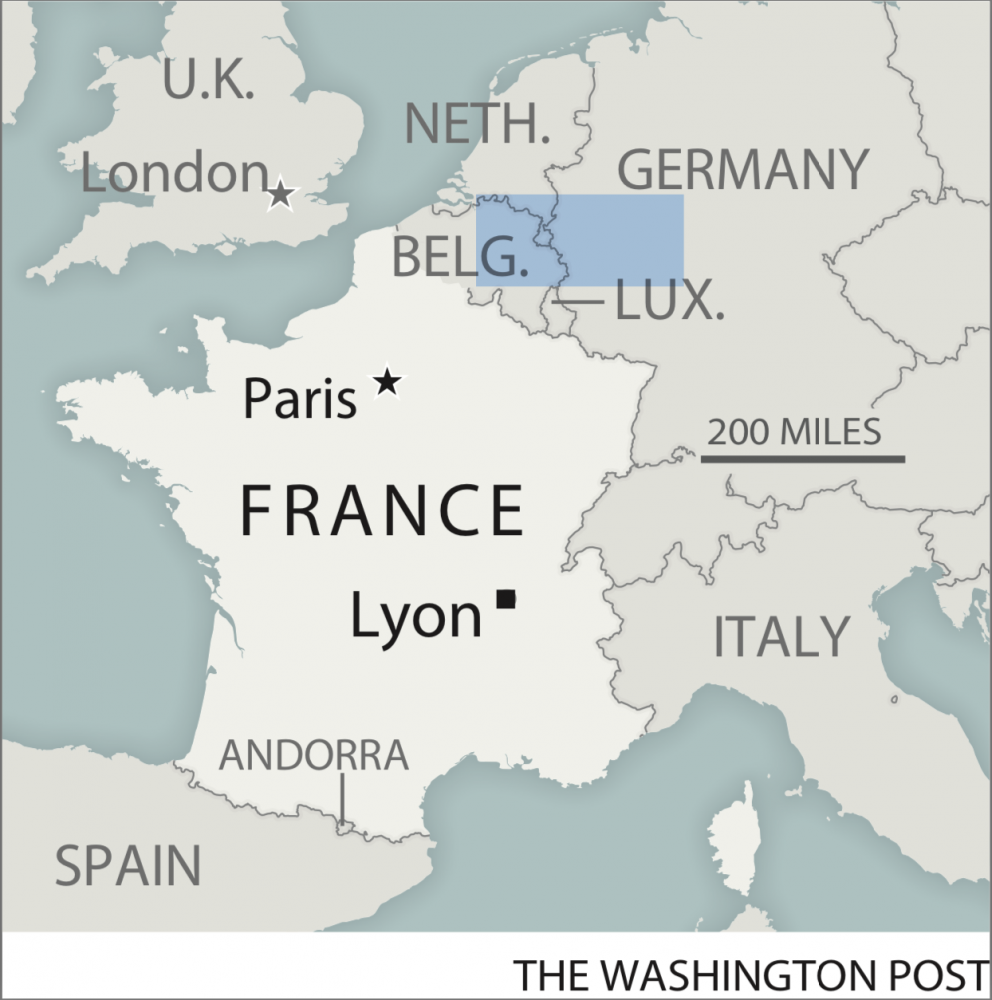 So when I heard last year that Lyon was opening a so-called Cité Internationale de la Gastronomie, I climbed the ladder of my home library to seek the old guidebook. Six restaurants remained; a visit felt timely. I would hit each spot, discover the new Cité and consult a food historian: Could Lyon circa 2019 still claim the title of World Capital of Gastronomy?

No Muzak here, only the happy chimes of silverware as I cruised along the immense art deco dining room, zigzagging between red moleskin banquettes and long tables covered with starched white tablecloths. Above my head, steel-and-glass chandeliers heralded the stylized ceiling fresco. And there it was - his name engraved on a copper plaque at table six.

Taking my cues from Curnonsky's guidebook, I ordered the Incomparable gratinée and a brown, fatty choucroute escorted by ham, sausages and boiled potatoes. The gratinée, an exquisite onion soup, was thickened at the table with an egg yolk stirred in Madeira wine. Lightly acidic, the sauerkraut balanced the sweetness of the soup, while the plump meats yielded salty deliciousness.

As Lyon's silk industry collapsed in the 1900s, bourgeois laid off their cooks. Finding themselves jobless, several women founded their own eateries and became known as Les Mères (the Mothers). In 1933, La Mère Brazier was the first woman to be anointed by the Michelin guide: three Michelin stars for each of her two restaurants!

Since 2008, Chef Mathieu Viannay has led her downtown historical restaurant, and while she remains his inspiration, the authentic but modernized interior, as well as his inventive variations on her recipes - and his two stars - are clearly his own. Describing her cuisine, Curnonsky mentioned simple perfection. Dare I say that Viannay's 12th version of her foie gras terrine and artichoke heart came close? How long until his third star?

The Brunet family is long gone, but current owners Xavier Beyrieux and Benjamin Baldassini are passionate about Lyon's culinary legacy.

"For us," said Beyrieux, "acquiring a 1934 bistro only makes sense if we keep everything as close to the original as possible."

They kept the name, the original checkered floor tiles, similar marble tables and wooden chairs. The old bar collapsed, but the new one is its honorable heir. The menu still features tripe, sauce gribiche and cow's udder with garlic, but Curnonsky called the escargots "a splendor." Indeed, snails bathed in bubbly caramelized parsley butter tasted splendid.

Standing proud since 1904 on a downtown street corner and named for its founder, Léon Déan - a king of cooks, wrote Curnonsky - this elegant wood-paneled space was recently revamped and now features a casual bistro, a gastronomic restaurant and a cozy contemporary bar. A collection of classic paintings depict kitchen scenes and set the stage for chef Olivier Bourrat's Lyonnais cuisine.

I was dying to experience the sum of gastronomical pleasures described by Curnonsky, but it was too early for liquor souffle. Instead, I savored another local favorite, the earthy pâté en croûte, a mosaic of chicken, veal, sweetbreads, pork and foie gras encased in a savory crust as crumbly and buttery as a shortbread.

Curnonsky mentioned the famous choucroute du Nord, but I opted for the massive saucisson pistaché, two hefty slices of pinkish saucisson studded with pistachios and stuffed into a delicious brioche.

"Curnonsky who?" asked the young chef of Le Passage, a gorgeous bistro hidden within a traboule, the typical Lyonnais covered passageway between two streets. My guidebook referred only to a smart wine list, but the young owners were thrilled to see their locale mentioned in a 1935 book. No history buff here, but a solid contemporary menu and a modern cocktail selection at the theatrical bar.

Once UNESCO inscribed the French gastronomic meal on its intangible cultural heritage list in 2010, France was required to create ways to safeguard that concept. Several cities broached the idea of institutions dedicated to gastronomy. Four won the golden ticket, each with a specific theme, and Lyon is the first to open. Dijon, Tours and Paris-Rungis will follow.

"It's not a museum nor a restaurant," said director Florent Bonnetain. "It's an interactive cultural space focused on food and health, for gourmands of all ages."

The Cité, 43,000 square feet of exhibit space over four stories, is housed within the renovated 12th-century Hotel-Dieu - once a monumental hospital, today a stunning complex - comprising a five-star hotel, restaurants, offices and shops. Whether a visitor follows their nose directly to the working kitchen or digs into the culinary personalities who marked the city - Bocuse's old stove-top is there, Mère Brazier's towering pots and even a cardboard Curnonsky - the center celebrates culinary culture.

Everywhere I went in Lyon, people were eating. Besides the historical joints, the city brimmed with new eateries, sumptuous pastry shops and busy wine bars. Finally, I asked Bonnetain if Lyon could claim the world title.

"There are many gastronomies today," he said. "Lyon may not be the world capital, but it remains a capital, a center of French, Lyonnais cuisine."

"He put Lyon on the map in 1935," he answered, "but it was Paul Bocuse who promoted Lyon internationally. Now that he's gone, the question is: Who will pick up the baton?"

Facing Bellecour Square, one of the largest pedestrian squares in Europe, the Royal features regal luxury in the very center of town. Students from the Paul Bocuse Institute, a top hospitality school, spend time in each department as part of their internship and bring candid, friendly service. Rooms from about $200 per night.

In the heart of old town, this fun property revisits with humor the theme of an old-fashioned French school. Comfortable and design-centric, the rooms are on the small side, though some feature balconies, and the library serves as a wonderful hangout. Rooms from about $133 per night.

Near the Perrache train station stands this epitome of a French brasserie, founded in 1899. Lyon has changed and grown around it, but the beer is still homemade and satisfying, the choucroute is still the best in town, and the room still packs celebrities, locals and travelers. Open weekdays 11:30 a.m. to 11 p.m. and weekends until 12:15 a.m. Entrees from about $21.

Chef Mathieu Viannay has revived the old haunt of La Mère Brazier, the first woman to receive three Michelin stars for each of her restaurants. Classics such as the artichoke and foie gras terrine or roasted venison are revisited and enhanced. This historical institution, a worthwhile splurge, has become my favorite table in Lyon. Open Monday to Friday noon to 1:15 p.m. for lunch, 7:45 to 9 p.m. for dinner. Entrees from about $62.

The small, bustling bistro in downtown Lyon specializes in simple Lyonnais dishes including offal, stews and goat cheese beignet. The wine list features numerous options by the glass and offers great value for local crus. Open weekdays except Tuesday noon to 2 p.m. and 7 to 9:30 p.m.; weekends noon to 2:30 p.m. and 6:30 to 10 p.m. Entrees from about $17.

A historical restaurant revisited by a young team, Léon now features a gastronomic dining room and a casual cafe and bar within the old space. From bubbling marrow bones to delicate roasted pollock served with cockles, traditional French specialties are the focus here. Open daily noon to 2:30 p.m. and 7 to 11 p.m. Entrees from about $18.

One of Paul Bocuse's brasseries, this busy spot caters mostly to a business crowd in search of a solid, no-fuss menu. Traditional local dishes share the spotlight with fusion-style specialties including sashimi, jamon Iberico and classic pasta. Open daily noon to 2 p.m. and 7 to 10:30 p.m.; Fridays and Saturdays until 11 p.m. Entrees from about $18.

Hidden in a traboule, a typical Lyonnais passageway between two buildings, tThis hip establishment is divided into a fine-dining room, a bar and two private salons including a cigar lounge. On the menu: steak tartare, veal sweetbreads, fillets of bass and a lively cocktail list. Open Tuesday to Saturday noon to 1:30 p.m. and 7:30 to 9:30 p.m. Entrees from about $21.

Nestled within the monumental renovation of the 12th-century Hotel-Dieu, a former hospital, this interactive museum dedicated to food, gastronomy and health occupies four floors. Cooks and chefs work all day in the demo kitchen and produce interesting bites for tastings. The exhibits are open daily 10 a.m. to 7 p.m. and until 10 p.m. on Saturday. Tickets and tasting about $27, adult tickets about $13, ages 5 to 15 about $9, children under 5 free.