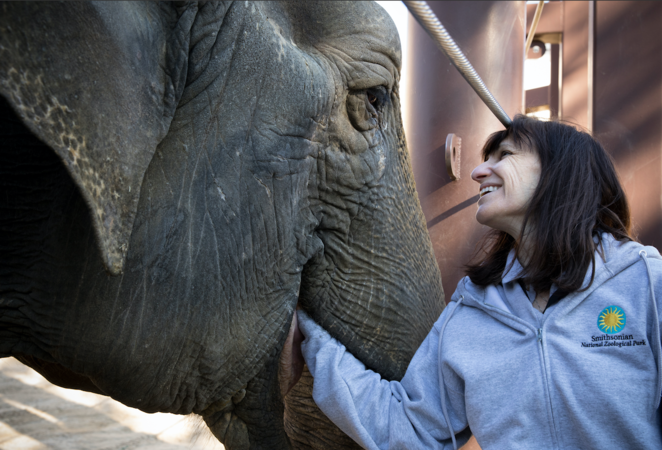 Ambika is pictured with Elephant Manager Marie Galloway at the National Zoo. Galloway and Ambika have been together more than 30 years. MUST CREDIT: Photo for The Washington Post by Evelyn Hockstein

WASHINGTON - The elderly Asian elephant stands dozing in her compound at the National Zoo. The bottom of her trunk is curled on the sand floor. And morning sun streams in through an open door.

Keepers call her "The Queen."

Her name is Ambika, and she is 72, which is about 100 in human years. She's had a long life. Captured in India at 8, she worked for years as a logging elephant. She came to the zoo in 1961 and is now in the twilight of her days. 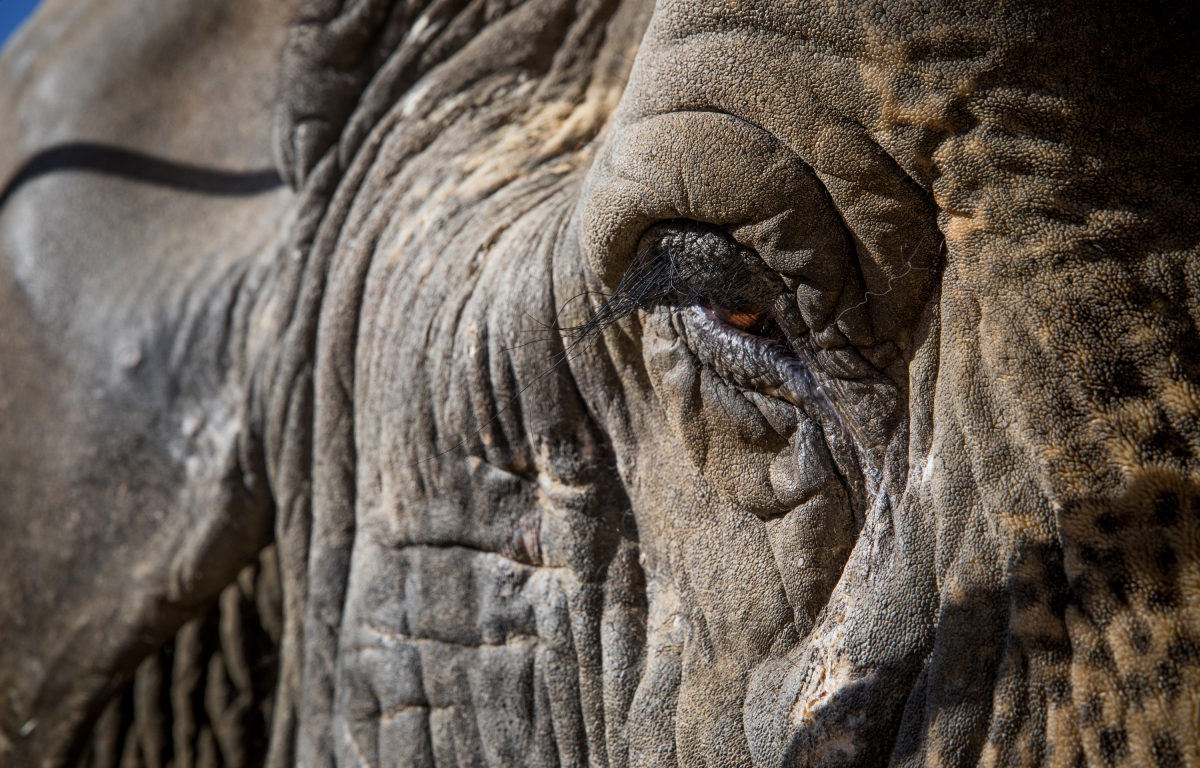 And while she snoozed one recent morning, and birds chirped in the compound, zoo officials said they have made plans for her death.

What happens when a zoo elephant dies? Especially one who has been on her throne, so to speak, for almost 60 years?

The British have a detailed plan, code-named "London Bridge," for when Queen Elizabeth II dies.

The zoo has no code name for its Queen, but the process is an emotional, physical and logistical ordeal, the zoo's chief veterinarian, Don Neiffer, and senior curator and elephant specialist, Bryan Amaral, said last week. 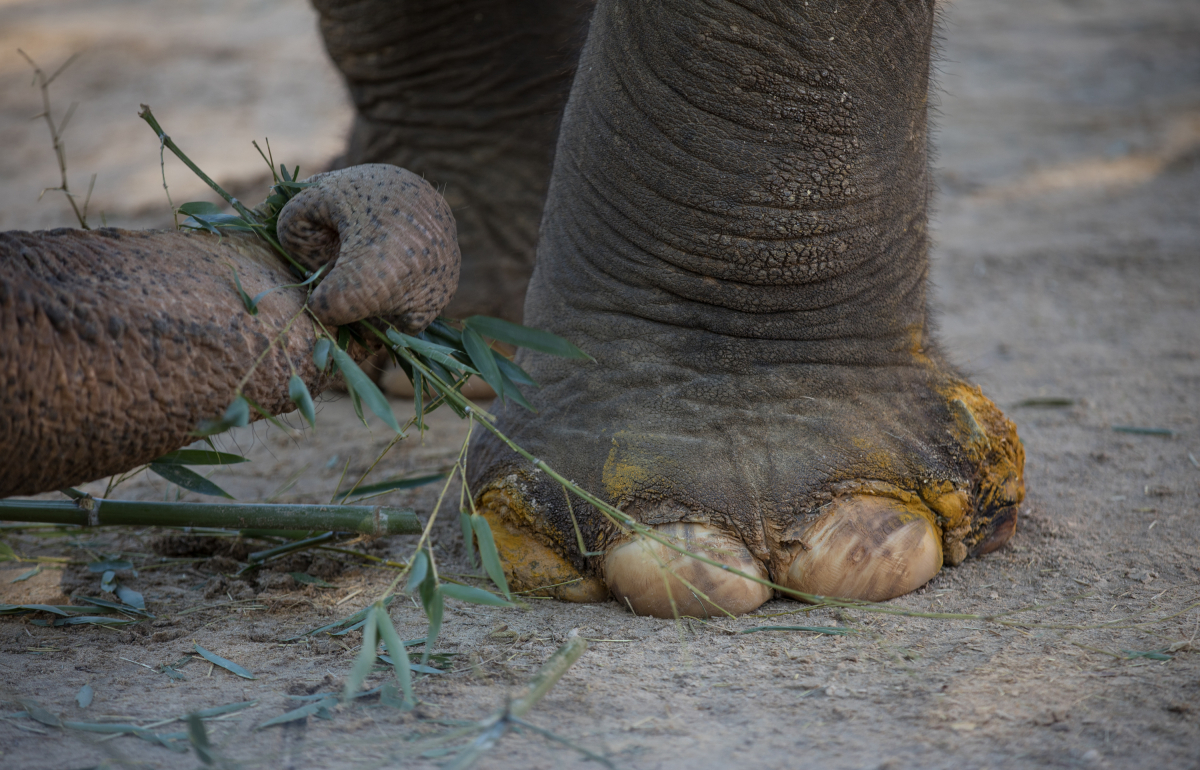 Ambika is in decent health, despite some dental issues. But the zoo has been focused on such end-of-life issues because of the advanced age of its herd.

Aside from Ambika, the zoo has four other elephants in their mid-40s. The median life expectancy for Asian elephants in zoos is 46.9, the equivalent of about 77 in humans, Amaral said.

So the zoo is planning.

What happens if Ambika has to be put down - euthanized?

How is that done?

Would the other elephants mourn?

It is, of course, dire for the elephant and can be wrenching for the staff. Some of Ambika's keepers have been with her for decades.

The decision to put an elephant down is made with deliberation and only when the zoo concludes that there is nothing more it can do to keep the animal from suffering, Neiffer said.

Extensive consultations with the staff must take place. A day and time must be picked and the appropriate drugs administered. The other elephants will have a few moments with the deceased.

Arrangements must then be made for the removal of the body by truck from the zoo to a facility where a necropsy - an autopsy for animals -takes place. (Ambika, for example, weighs 6,500 pounds, and the zoo would prefer to do the necropsy off-site.) The zoo has three veterinary pathologists who would help with the job.

The remains will then be "disarticulated" and incinerated. Physical specimens can be retained for research purposes.

No ashes will be kept for sentimental reasons, the zoo said. It declined to say where the incineration facility is.

The zoo has seven elephants - six females and a male. Females Swarna, Kamala and Bozie are about 45, and Shanthi is 44. Female Maharani is 29, and the male, Spike, is 38.

"A good component of our elephants are geriatric," Neiffer said.

Elephants of advancing age can suffer from serious dental and foot problems, arthritis and gastrointestinal issues. (In 2014, Bozie was almost killed by a mysterious infection, from which she seems to have recovered.)

Crippling arthritis, for example, can be a cause for euthanasia, Neiffer said.

"When you get to the point when the animal can't be made comfortable, can't interact with its herd mates, can't move around its enclosure . . . honestly, we shouldn't even be at that point," he said. "We should have made our call well before that."

"We expect that at some point in time to have the fortunate burden of giving them the last gift we can give them, which is a humane passing," he said.

Fortunate, "because it means we've done our job right."

But death can also come to younger elephants.

In 1995, the zoo's 16-month-old female elephant, Kumari, died unexpectedly. A post-mortem investigation by the zoo showed that she had a previously unknown strain of herpes virus that had also killed other elephants.

There is no cure. But the National Zoo has a special lab that studies the malady and has discovered that intense treatment can sometimes save an infected elephant, a spokeswoman said.

Elephants are tough but social and intelligent animals that can size up a keeper in seconds, Amaral said. They have quirks and personalities. They can be contrary and aggressive with one another. They can also be stoic about health problems.

The object is to intervene before a sick animal is in extremis.

"Death with dignity," Neiffer said. "I've seen animals down . . . [and] to see an animal that was mobile and is down and is struggling" is awful.

Suffering elephants can get a look in their eyes that is unnerving.

"It's the white of the eye," he said, when it looks like a hard-boiled egg. "There's something about it. When they're giving you that stare . . . it's something you don't forget. So I don't ever want to see one of our elephants down on the ground with that eye."

The difficulty is trying to figure out when an elephant is seriously ailing.

Amaral said they are often described as a huge black box. "You can get [information] from the toes to the elbows and the nose to the edge of their face, and the tail."

Because of their size, the rest can be a mystery. "Something as simple as an X-ray is impossible on parts of an elephant," he said.

Once the decision is made, ideally, the animal is shifted into an area of the zoo where it can be euthanized and easily removed from the compound. If the elephant can't be shifted, the procedure would take place wherever the animal is.

"One thing we're not going to do in her eleventh hour is pressure her and freak her out and push her," he said. "We'll go to her."

The animal would first be sedated. Then the euthanasia drugs would be injected via catheters in veins in the elephant's ears or legs. A ladder might be used to reach the ears.

The same drugs are used that are used to put down a pet dog, Neiffer said.

"It's a hard thing to watch," he said. "Even though the animal is anesthetized . . . you're watching your elephant fall 0ver."

At that point, other elephants could be given access to the body.

"This sort of emulates what elephants would do in the wild," Amaral said. "They're social. They usually investigate . . . Some will ignore [the body]. Some might give it a nudge, 'Hey, you going to get up?' or whatever."

"I think they do to a point," he said. "But they also move on pretty quickly. Generally speaking, the elephants have moved on before the staff."

The necropsy, which can take an entire day, would involve several experts and perhaps observers for educational purposes. "It's not every day you get to necropsy an elephant," Neiffer said.

He said the goal is to look for a cause of the animal's disease, for things you didn't expect, and for broader knowledge to better the lives of elephants.

Afterward, grief counselors are available for the staff.

"We see it all the time," Neiffer said. "People are fine. The moment that euthanasia solution goes in . . . the teargates open. They did their job. They kept it together . . . until somebody said, 'It's OK to be human again.' "