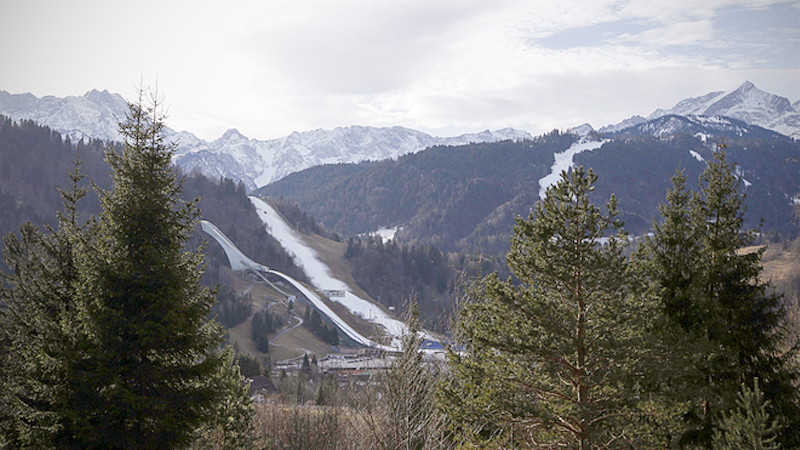 At the northern edge of the Alps, ski runs near the foot of Germany's highest mountain snake down the greenish-brown slopes in narrow white ribbons of artificial snow.

Like other resorts at relatively low altitude, global warming has left its mark on Garmisch-Partenkirchen - the site of the 1936 Winter Olympics-putting the town's identity and affluence at risk. It's January, and there's so little natural snow that anxiety is building whether upcoming ski races can go ahead. 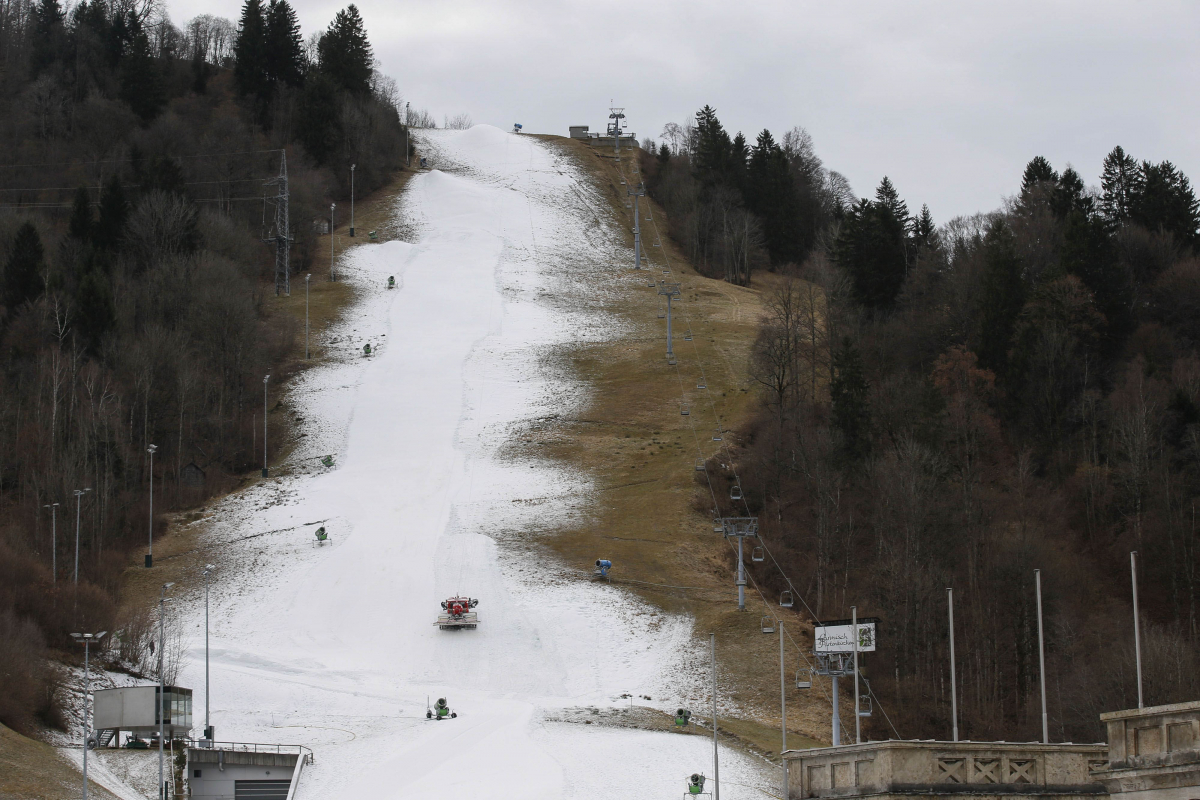 In Garmisch and across the Alps, tourism is a key support for local economies. In neighboring Austria, it makes up just over 6% of economic output, while in the mountainous region of Tyrol the share is more like 18%. The ratio is similar for the Swiss canton of Graubünden, thanks to resorts like St. Moritz, Klosters and Davos. 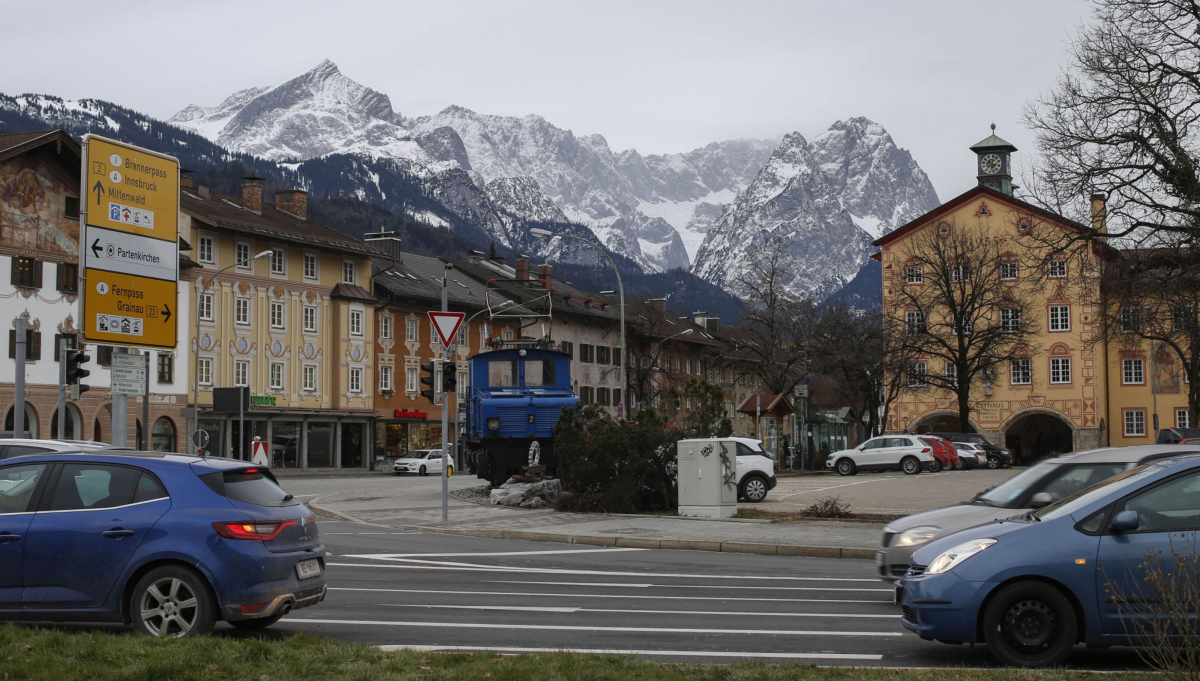 That source of income is under genuine threat. Climate change is expected to cost Austrian tourism 300 million euros a year, according to one of the country's leading environmental protection organizations. In France, authorities in Tignes delayed the start of the ski season by several weeks, citing the effects of global warming on the Grande Motte glacier.

"If greenhouse-gas emissions continue at the same level, snow will almost disappear at lower levels by the end of the century," said Marc Olefs, head of department for climate research at Vienna's Central Institute for Meteorology and Geodynamics.

At an elevation of 800 meters, Garmisch-known for its landmark ski jump-has little prospect of maintaining its status as a winter-sports mecca.

Among visitors, the changing conditions are accepted with quiet resignation.

Juergen Hilla, a school teacher from near Frankfurt, predicted that skiing and other winter sports may not be viable in Garmisch in the longer term and that he and his wife may have to consider alternatives for their ski vacation.

"Probably in 20 or 30 years, it won't have the same role as it does now," he added after a day on the slopes. The higher runs were in good shape but the lower ones needed cannons spraying artificial snow to keep them passable, Hilla said.

To make up for a lack of natural snowfall, resorts switch on the cannons, although they're energy intensive and unpopular with environmentalists. Producing artificial snow will get harder as temperatures rise, Olefs predicted.

The practice didn't start because of climate change originally-it was meant to make ski resorts less dependent on the whims of nature, according to Robert Steiger, an assistant professor at the University of Innsbruck. But it's become unavoidable to cope with global warming.

"Some regions and areas will lose ski tourism by the mid of the century, or even earlier," said Steiger, who has studied the impact of climate change on tourism. "Higher areas will survive, but they will have to invest more in snowmaking and to cope with the additional tourist inflow."

Another option is snow farming, where mounds of the precious white flakes are collected in spring and covered with sawdust for use later in the year.

Areas most affected by warming are on the outskirts of the Alps-in Austria's east, the foothills in France and Italy and in Germany. They were never as dependent on ski tourism as some regions in the central Alps, and are more attuned to welcoming guests around the year, Steiger said.

Already, the summer generates 60% of the tourism intake, according to Garmisch Mayor Sigrid Meierhofer. That's a development seen elsewhere. In Switzerland, summer overnight hotel stays were a third higher than the winter of 2018-2019.

Summer bookings overtook winter in Austria as well a few years ago, even as revenue is still higher in the winter months because of equipment purchases and lift fees.

"Summer tourism growth is highest in the mountains," according to Ulrike Proebstl-Haider, a professor at Vienna's University of Natural Resources and Life Sciences. "That's also partly driven by climate change, for instance because it's helped make the autumn more attractive."

In Saalbach-Hinterglemm in Austria, ski runs are transformed into tracks for summer mountain bikers, and cable cars are remodeled to accommodate the muddy riders on their way up.

Swiss towns are picking up on the trend. Both Gstaad and Verbier host concerts of classical music in the summer, while Davos also offers summer conferences, expanding its schedule beyond January's World Economic Forum.

"Of course, we have to come up with concepts to maintain the winter tourism that we still have," she said. "You say it's brown-I say the hiking paths are open."