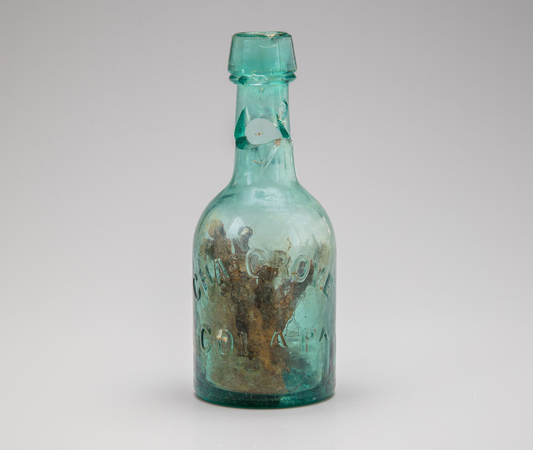 When archaeologists digging between busy lanes of traffic on Virginia's Interstate 64 unearthed a broken bottle filled with nails, they weren't sure exactly what they had found.

The glass vessel discovered at an old Civil War fortification east of Williamsburg might simply have been an ad hoc toolbox for troops garrisoned at the site nearly 160 years ago. But researchers at the Center for Archaeological Research at the College of William & Mary advanced a far more intriguing theory this week.

The artifact may in fact be a "witch bottle," they say, one of only a handful that have been found in the United States.

What's a witch bottle? For centuries, they were used as occult countermeasures to the mischief of suspected sorceresses in England and America.

The evidence of a superstitious purpose is circumstantial but compelling, according to Joe Jones, the center's director.

The bottle, which is jade blue and less than half a foot in height, was plucked in 2016 from the soil dividing traffic on Interstate 64 between exits 238 and 242 in York County. William & Mary archaeologists were inspecting the area for any remaining artifacts in advance of a highway-widening project by the Virginia Department of Transportation.

Known as Redoubt 9, the site was part of a string of fortifications between the James and York Rivers, originally built by Confederates to repel Union troops advancing on Richmond. But Redoubt 9 was taken over by Union forces after the Battle of Williamsburg in 1862, and the bottle - which carries the name of a manufacturer in eastern Pennsylvania - is probably a relic of those soldiers, Jones said.

Far from home, occupying enemy territory in a bloody and unpredictable conflict, some might have felt the need to keep evil at bay.

Witch bottles can be traced to the East Anglia region of England in the late Middle Ages, according to a summary of research on the subject by JSTOR Daily. The bottles typically included human urine, hair or fingernail clippings and sharp objects such as nails, pins or thorns.

The objects worked by luring witches or malevolent spirits with the urine, hair or fingernail clippings, then trapping them with nails or pins - a low-tech witch hunt. Nearly 200 have been found in Britain, where researchers have launched a multiyear survey and study of witch bottles, complete with a social media-aided #WitchBottleHunt campaign to educate the public on identifying the artifacts. Last year, contractors razing an old pub found a suspected witch bottle containing fish hooks, teeth and a mysterious liquid.

The situation on the I-64 median is less clear-cut. While its resting place was undisturbed, the neck of the bottle had been broken open - probably from the weight of accumulated soil, Jones said - at the time it was uncovered.

"That's the first question that people who know about witch bottles would ask," Jones acknowledged. However, with an unsealed interior, the vessel could not be accurately tested, he said.

But other factors point to the superstitious purpose first suggested by two of Jones's colleagues, Oliver Mueller-Heubach and Robert Hunter. The bottle was found next to what archaeologists think are the remains of a hearth or fire pit, a common spot for witch bottles. And the historical context of Redoubt 9 is compatible with the use of such a talisman.

"If you read the literature about witch bottles and what they are to the people who believe in them or use them," Jones said, "they're more abundant during periods of political turmoil, or drought, or bad harvests - general periods when people think there are bad spirits." A lonely outpost of Union soldiers in the midst of the Civil War fits the bill.

The remnants of that outpost are gone, Redoubt 9′s earthworks graded to expand the interstate. And were this a tale told by M.R. James, the renowned British writer of ghost stories, the outcome would be predictable: Malignant spirits, up to and including long-confined witches, would emerge to torment the curious scholars who disturbed the bottle.

Asked whether any such adversity had befallen the archaeologists of William & Mary since the object's discovery in 2016, Jones laughed, then thought for a moment.

"It would probably be easy to blame all kinds of things on the bottle," he said.