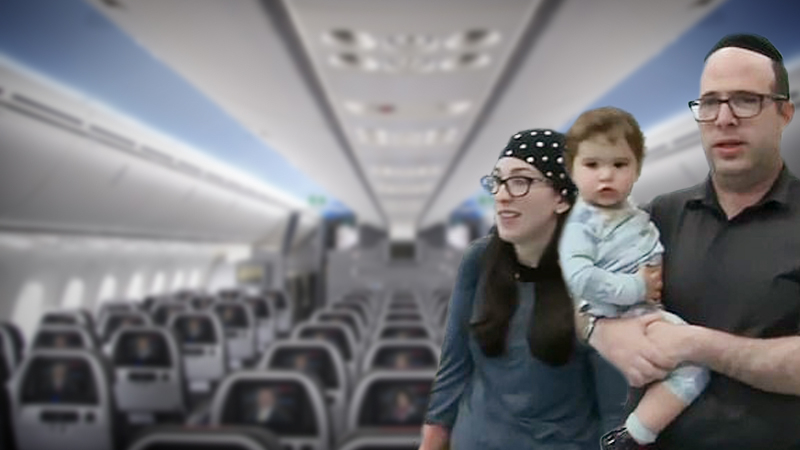 An Orthodox Jewish couple is suing American Airlines for discrimination after being kicked off a flight over body-odor complaints - and, they say, being humiliated by a gate agent on their way off the plane.

Jennie and Yehuda Yosef Adler and their 19-month-old daughter were booked on an American flight from Miami to Detroit on Jan. 23, 2019, but were deplaned before departure over complaints about offensive body odor, according to a federal lawsuit filed this week in the Southern District of Texas.

About five minutes after the Adlers took their seats, an American Airlines gate agent approached the family, saying there was an emergency and that they needed to get off the plane, court records show.

Yehuda Adler, of Southfield, Michigan, told The Washington Post last year that he and his wife were concerned that something had happened with their eight other children, who were at home. He said that after they got off the plane they were told that they had been removed because of a stench. Adler told The Post that the couple was "humiliated," "frustrated" and left wondering about the real reason they were told to deplane.

"Obviously, there was a reason," Adler, who is Jewish, told The Post at the time. "But I think it was an anti-Semitic reason."

The family is now suing the airline for racial and religious discrimination and equal rights violations. The family is seeking a jury trial and $75,000.

American Airlines disputed the claim that its employees discriminated against the Adlers, saying in a statement that "none of the decisions made by our team in handling this sensitive situation were based on the Adlers' religion."

The statement said that "the Adler family was asked to deplane after multiple passengers and our crew members complained about Mr. Adler's body odor." The airline said it provided the family with hotel accommodations and meals and rebooked them on a flight to Detroit the next morning.

Yehuda Adler told The Post last year that the alleged odor was "a fairy tale and cover for the reprehensible discrimination exhibited to myself and the insensitive treatment I and my family received by AA staff."

A person who spoke to The Post last year agreed with the airline that there was a "stench," and a woman who claimed to have been on the plane tweeted her agreement about the odor and said "it had nothing to do with religion."

According to the lawsuit, the Adlers were among the last people to board American Airlines Flight 1023, and they claim they encountered hostility almost immediately after stepping aboard the plane.

The flight's pilot told the family that nothing on the plane was complimentary after yarmulke-wearing Yehuda Adler asked a stewardess for headphones, according to the complaint.

The comment was "nasty and humiliating," but Yehuda Adler ignored the pilot's vitriol and made his way to his assigned seat with his wife, who was wearing a sheitel, or wig, the complaint said.

The gate agent then approached the family to tell them there was an emergency and they needed to exit the plane, according to the lawsuit.

Once off the plane, the gate agent allegedly drove insult deeper by telling the family he knew that Orthodox Jews bathed once a week, according to the complaint.

American Airlines declined to comment on the action of the gate agent.

The family left the plane and was told they were taken off because of "extremely offensive body odor," according to the lawsuits. The family was stunned. They had never been subject to complaints about body odor on a plane before.

The mortified husband and wife surveyed more than 20 people in the airport to ask if they did have a bad smell and they all answered "no," according to the lawsuit.

The flight took off without them with their luggage, diapers, car seat and stroller still onboard, according to the complaint.

According to the court records, the pilot violated the Adlers' contractual right to flight all because the couple and their child were "flying while Orthodox Jews [ . . .] and having the guts to make a complimentary request."

The lawsuit said that the publicly humiliating event has caused severe emotional stress and suffering. It said the Adler name was defamed after American Airlines released a statement that the family had body odor, resulting in online searches that yield "body odor" along with "Adler," according to the complaint.

A Google search for "Adler" and "body odor" yielded pages of articles about last year's event and American Airlines stating the family had body odor.