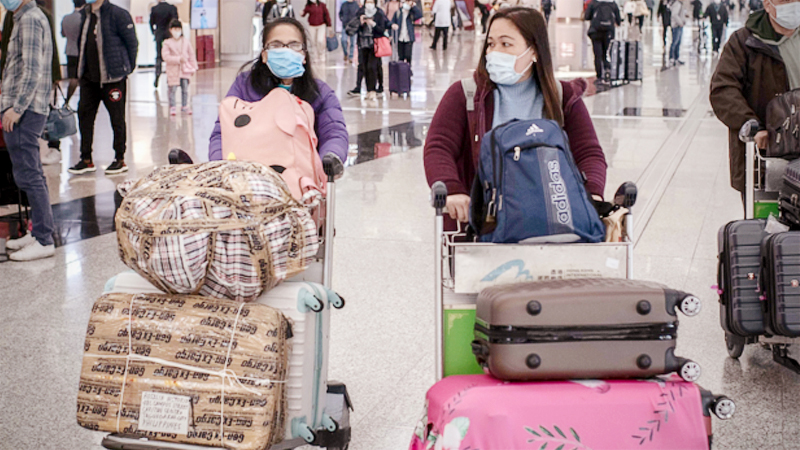 Passengers wear surgical masks at the check-in terminal at the Hong Kong International Airport in Hong Kong on Jan. 30, 2020. MUST CREDIT: Bloomberg photo by Ivan Abreu.

Hotels, luxury shops and attractions around the world that came to rely on a flood of Chinese tourists are facing an even bigger crisis than during the SARS outbreak as the new viral outbreak infects more people than the 2003 pandemic.

From Tokyo to London, hotels, casinos, airlines and retailers are already recording a downturn and are bracing for weeks, if not months, of plummeting spending after China curbed outbound travel and governments tightened border controls.

About 163 million Chinese tourists made overseas trips in 2018 -- more people than Russia's population -- accounting for more than 30% of travel retail sales worldwide. In 2003 when SARS broke out, only 20 million Chinese travelers went abroad. China's increased affluence and consumption since SARS have made many international cities, luxury brands and retail industry groups more reliant than ever on Chinese travelers.

"It's a triple whammy -- Chinese travel more, they spend more and they spend more on beauty products," said Stephanie Wissink, a Jefferies consumer analyst who recently issued a report on the virus' impact on travel spending. "Chinese travelers are the most significant and most important customers for growth in the travel retail industry."

The virus adds a new level of uncertainty to a global industry that was already suffering the effects of China's economic slowdown.

"The benchmark everyone is comparing this to is SARS in 2003," said Luya You, a Hong Kong-based transportation analyst at Bocom International. "The actual cost and negative impact of this virus could be greater because more Chinese are traveling than before. The cost of preventing travel, grounding flights is magnitudes higher than what it was in 2003."

Chinese tourists spent $150 billion on purchases during last year's Lunar New Year holiday, according to Jefferies. The travel retail industry, a segment that includes duty-free shopping and retail at airports and other transportation hubs, was a $79 billion business in 2018 and saw the biggest growth in Asia, according to research firm Generation Research.

Just before this year's Lunar New Year holiday, when hundreds of millions of people in China visit family or take vacations, authorities locked down Wuhan, the city of 11 million people where the virus originated. Travel has been restricted from much of the surrounding Hubei province, home to about 50 million inhabitants.

Hong Kong, Singapore and Malaysia have tightened borders to restrict inbound travel from China as the number of infected people is on pace to surpass 10,000. Russia closed its border with China to most passenger travel, while the U.S. and Japan advised their citizens against traveling to the country. In China, at least 213 people have died from the coronavirus and cases of infection have been reported in more than a dozen other countries. During the SARS epidemic, there were 8,096 officially reported cases, according to the World Health Organization.

Carriers including British Airways, Cathay Pacific Airways, Delta Air Lines and American Airlines have suspended or reduced flights to and from destinations in China. Carnival Corp. and Royal Caribbean Cruises have suspended cruises departing from China.

"When airlines are cutting flights, that has impact on ports of entry that affects not just airports and shops, but surrounding nodes too," said Jefferies' Wissink. "It's an entire ecosystem that's being disrupted, with lots of spillover effects."

Two of the hardest-hit cities are Hong Kong and Macau.

Hong Kong's shops and hotels were already being clobbered by months of civil unrest that deterred mainland visitors and pushed the economy into recession. The virus is a further blow to the all-important retail sales and tourism from mainland visitors who come to the territory with empty suitcases to fill up with luxury and consumer goods.

In Macau, China's gambling enclave, new travel restrictions and the growing fear of crowds, have slashed visitor numbers from the mainland by 83% so far during this year's Lunar New Year holiday.

Las Vegas Sands Corp. Chief Executive Officer Sheldon Adelson said on Wednesday that employees of the casino operator are wearing protective masks and are checking the temperatures of guests.

"When I walk in there I think I'm going into an operating room," Adelson told investors on a call. "Everybody's got masks."

Even if the virus outbreak is contained, the knock to China's GDP may be significant, with repercussions felt across the world, according to analysis from Bloomberg Economics.

In Japan, the Wuhan virus may dent Prime Minister Shinzo Abe's goal of attracting 40 million visitors this year as his country hosts the summer Olympic Games.

"Japan's tourism industry, like many in the region, looks set to be clobbered by China's suspension of package tour sales as it battles to curb the spread of the new coronavirus," said Bloomberg economist Yuki Masujima. If Japan's tourism industry is affected to the extent it was during SARS, it could cost the nation's economy about 611 billion yen ($5.6 billion), he said.

In South Korea, another hotspot for Chinese tourists, businesses such as duty-free sales and casinos are being affected, said Jun Young-hyun, an analyst at SK Securities Co. in Seoul. "Korea's dependence on China has increased," said Jun.

The economic impact could be much broader given that China is the nation's largest trading partner.

Lotte Group, which runs shopping malls and hotels, has seen some hotel reservations canceled, but a representative said it's too early to gauge the full impact of the virus.

Many analysts are warning that the toll on the tourism and hospitality industry could be worse than during the SARS epidemic, when Chinese travelers were a smaller group than they are today. "Global hotel giants are now more exposed to Asia, meaning any downfall in revenue could hurt deeper," wrote Natixis SA economists Alicia Garcia Herrero and Gary Ng in a report Thursday. "Even without being certain about the extent and duration of the new virus, the impact of the novel coronavirus on Asian and global hospitality will be worse than in the past."

Hotels across Southeast Asia have recorded cancellations after China banned outbound group tours. Tourism accounts for more than a fifth of gross domestic product in countries like Thailand and the Philippines, twice the global average.

Thailand, the most popular destination in the region for Chinese visitors, has been hardest hit in Southeast Asia, with at least 2 million fewer visitors expected from China this year, according to the Tourism Authority of Thailand. The nation is bracing for tourism revenue losses of as much as 50 billion baht ($1.6 billion) if China's curbs remain in place for three months, and the government lowered its 2020 GDP forecast on Wednesday, in part because of the outbreak.

Last year, 11 million Chinese visitors spent almost $18 billion, more than a quarter of all foreign tourism receipts, according to government data. The Southeast Asian nation has 13 confirmed cases of Chinese nationals infected with the virus and one Thai who returned from Wuhan with the disease.

At Bangkok's Suvarnabumhi Airport most travelers were wearing surgical masks during the Lunar New Year holiday and anyone coughing was given a wide berth. Hotels in the city offered masks to guests, but many of the local pharmacies had sold out.

In the Philippines, the Hotel Sales and Marketing Association said about 30 hotels have reported cancellations involving 600 hotel rooms in the Manila area. The government said it would stop issuing visas-on-arrival to Chinese groups.

Singapore, where 13 cases of the virus have been confirmed, said that from Wednesday it would stop allowing entry or transit of Chinese travelers with passports issued in Hubei.

China's ban on tour groups will have a "direct impact on tourism arrivals and revenue," said Terrence Voon, director of communications at the Singapore Tourism Board. "The situation is expected to persist."

Shanghai-based Trip.com, which runs the popular Ctrip flight and hotel booking platform, said it has established a 200 million yuan ($29 million) fund to cover customers who booked trips but can't travel. It extended waivers to about 30,000 hotels outside of China for voluntary cancellations of reservations booked on Ctrip before Jan. 24 with a check-in date through Feb. 8.

"When SARS came under control, we saw double, triple demand," said Sun. As long as "we can control this virus, the demand and buying power will be there.