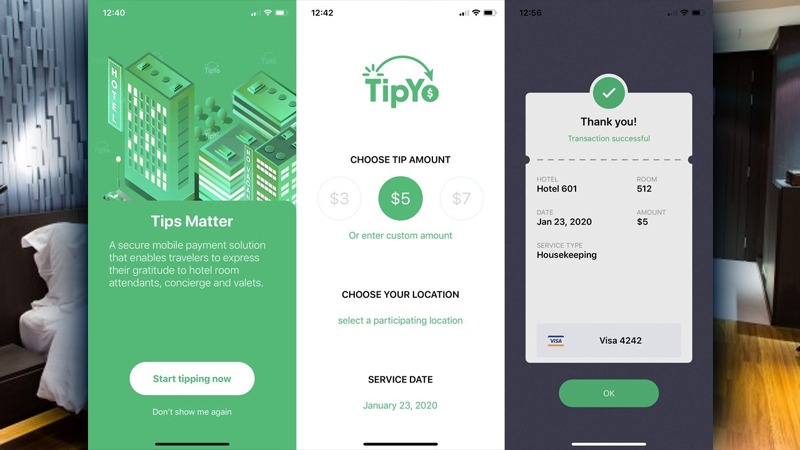 It's the universal travel faux pas: You arrive at a hotel, receive your luggage from the bellboy, reach into your pockets, scour your wallet, and turn up … nothing. Or, perhaps worse, a large-denomination bill you're too embarrassed to ask them to break.

Bashar Wali, president of Provenance Hotels, lamented the sorry state of hotel tipping in a post on LinkedIn this past July, in which he argued around the idea of tipping as fair compensation, and that it's more like an expression of gratitude, a "personal acknowledgment" to those who "are exposed to the worst parts of us [piles of dirty laundry, hangovers, room service leftovers] and get the least appreciation."

An increasingly cashless society, digital checkout features, the mad dash to the airport-they all make tipping harder, but they aren't good enough excuses.

The comments piled in. "If only there was an app for that …" multiple people said.

Now there is. TipYo debuted on Apple's App Store in November, promising to streamline the tipping experience for travelers everywhere. Except that right now, it's only available at Wali's Hotel Murano, in Tacoma, Washington, where it's been in a soft launch. (An Android version is coming in the first quarter of this year.)

The premise is simple: Once your receive your hotel room number, you can enter it in the app and have gratuities sent to a particular staffer or a general department (housekeeping, bell service, concierge, valet). Amounts can be selected from presets or customized, and the money is funded by Apple Pay (if you've set that up on your phone), or you can add a credit or debit card as a payment method. To ensure tips go to the correct person, even when you don't remember their names, hotel managers upload employees' shift schedules and can set rules around when tips should be pooled.

TipYo founder Brian Walsh isn't a hospitality guy, but he had grown frustrated with the tipping experience. "I rarely carried cash-even less so than usual in the last five years, since now we live in an era where we can order an Uber, check our bank accounts, order food, and pay people directly from our phones," Walsh tells Bloomberg. He wondered why tipping wasn't the same.

But he knew the answer: "The payments world is not for the fainthearted," he says.

His previous company helped churches process electronic donations, so he had experience clearing the regulatory hurdles that a tipping app would require. "We understand the space, its federal regulations, what's expected from the IRS," he says, making it easier for him to securely untangle a complicated money flow. The beauty of it, he says, "is you can confidently leave a gratuity and know that money is going into the right employees' paychecks." (Although unlike off-the-books cash, it can be taxed.)

So far, adoption is slow but encouraging, Walsh says. The app was quietly deployed at Wali's 300-room Hotel Murano late last November; in the two months that followed, 80 guests tipped through the app. This is with low-season occupancy rates and almost zero promotion, Walsh says, adding that those early numbers exceeded expectations.

To encourage app downloads, the hotel's first approach was to leave a little bit of marketing material on hotel room desks, but even Wali admits that "people don't look at anything in the room." So in the past month, the property has starting plugging TipYo in its pre-arrival emails.

"My concern was always the issue of adoption, because of the idea that you have to download an app and put your info in, but so far it looks like people are inclined to do it," Wali says. "We've taken the pain out of the cash thing."

Walsh knows that the market for TipYo could be enormous. "There are 5 million hotel rooms in the U.S. alone, and the independent luxury market [which is TipYo's sweet spot] is roughly 800 to 1,000 hotels," he says. TipYo signs monthly agreements with hotels, which pay a flat fee for the service; there's no cost to the consumer or employees receiving tips.

"Beyond that, you have everybody from Marriott to Hilton and all the brands they own," says Walsh, who's hoping that once one big brand commits to the technology, pressure will mount for others to jump on the bandwagon. Ultimately these larger brands could also incorporate TipYo's tech into their own digital platforms.

"After all, one of the greatest challenges in hospitality right now is employee retention, and we're helping to increase the take-home pay of staff who could otherwise go down the street and work for Amazon for an extra $3 an hour," he says.

Yet even for committed operators like Wali, syncing each hotel's back-end system with TipYo's platform can be a barrier-uploading those shift schedules and linking to payroll can seem like an encumbrance for managers already spread thin. And then there's the fact that not every hotel uses the same back-end technology; getting the second Provenance property (out of 14 total) up and running will take another six months, give or take.

Add complex labor union legislation to that-which is preventing Walsh from partnering with hotels in certain parts of the country, like New York City-and the complications of regulations in different countries, and the road ahead is a long one. For now, TipYo is focusing on the domestic market, which makes the app less relevant for high-tipping Americans who may not carry foreign currency abroad.

"I'm not sure why I need it," says Jack Ezon, founder and managing partner of Embark Beyond, a high-end travel agency that works equally in business and leisure bookings. But necessity isn't the mother of all invention-see how Uber has generated millions in gratuities for drivers, despite serious initial reluctance from passengers.

Most of Ezon's guests, he says, would be more likely to tip at checkout for easy expense itemization back at work. The potential he sees is largely outside the hotel. "If it could tell me how much to tip my driver, my guide, my head concierge, and give me both functionality and guidance that I could turn on and off-that would be a dream."