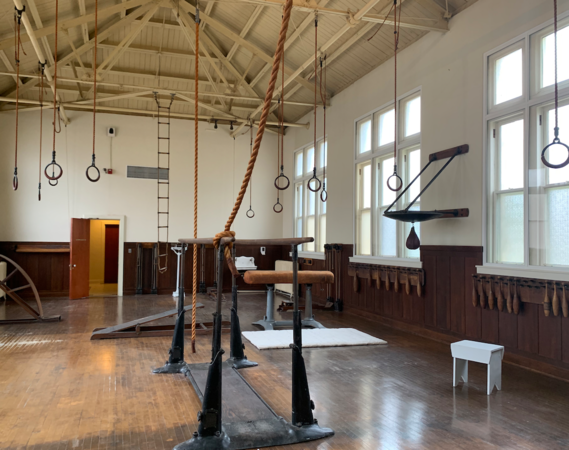 I'll just come clean: Baths have never appealed to me. They're time-consuming, and now, with a toddler, just taking a peaceful three-minute shower is nigh impossible. So I was surprised that my favorite moment of a visit to Arkansas' Hot Springs National Park was soaking in a lavender-scented whirlpool tub, watching ceiling fans turn lazily in the hushed calm of a high-ceilinged, century-old bathhouse. It didn't hurt that I was luxuriating in thermal waters, which bubble up from dozens of underground springs in nearby Hot Spring Mountain and are piped directly into local bathhouses, allowing visitors to, as the saying goes, "take the waters."

I'll just come clean: Baths have never appealed to me. They're time-consuming, and now, with a toddler, just taking a peaceful three-minute shower is nigh impossible. So I was surprised that my favorite moment of a visit to Arkansas' Hot Springs National Park was soaking in a lavender-scented whirlpool tub, watching ceiling fans turn lazily in the hushed calm of a high-ceilinged, century-old bathhouse. It didn't hurt that I was luxuriating in thermal waters, which bubble up from dozens of underg

Bathing in or drinking the water - a.k.a. "quaffing the elixir" - has been a public commodity since 1832, when President Andrew Jackson deemed what's now Hot Springs National Park protected land - 40 years before Yellowstone. During the Golden Era of Bathing (1880 to 1950), the mineral-rich H2O was thought to have medicinal properties, and, encouraged by their doctors, the ailing flocked to them for relief from conditions such as arthritis and back pain. At first, accommodations were rudimentary - wooden shacks built atop a gurgling spring - but eventually, the waters' healing reputation and laws requiring more sanitary and fireproof buildings shaped Hot Springs into a destination nicknamed "the American Spa." Its marquee attraction is Bathhouse Row, a collection of eight imposing stone buildings that line Central Avenue in downtown Hot 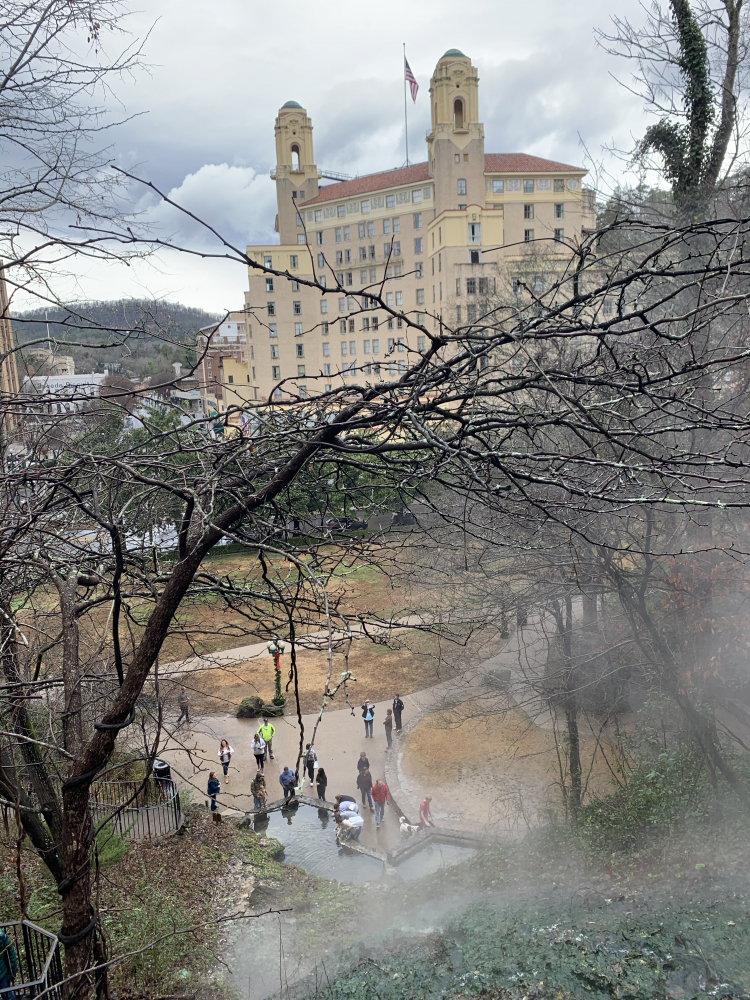 Springs, each with its own unique architectural style. Of course, these were white, wealthy endeavors; African Americans were mostly banned from using the bathhouses where they worked, forcing them to build their own nearby. What's more, a bathhouse regimen could cost as much as 55 cents, an average worker's daily salary in 1915 (the government did provide the needy a free bathhouse, which was later segregated). By 1921, the popularity of Hot Springs - whose baths were said to rival those of ancient Rome - led to its creation as our 18th national park. Yet as new medicines developed in the 1950s, therapeutic bathing declined, and business dried up. By 1985, only the Buckstaff Bathhouse remained open (and still is, boasting continuous operation from 1912).

But that wasn't the end of Bathhouse Row. The Park Service has restored and repurposed most of the buildings, from Superior, which houses a brewery and the world's only thermal water beer; to the Hale, a luxury hotel; to Quapaw, a modern spa; to the Ozark, a cultural center and art gallery. The tour de force is the Fordyce Bathhouse, an ornate Renaissance Revival structure built in 1915 that's now home to the national park's visitor center and museum. Civil War veteran Samuel Fordyce, who was brought to Hot Springs on a stretcher and walked out six months later, believed so deeply in the powers of the hot springs that he set out to "erect the finest bathing establishment in the world." 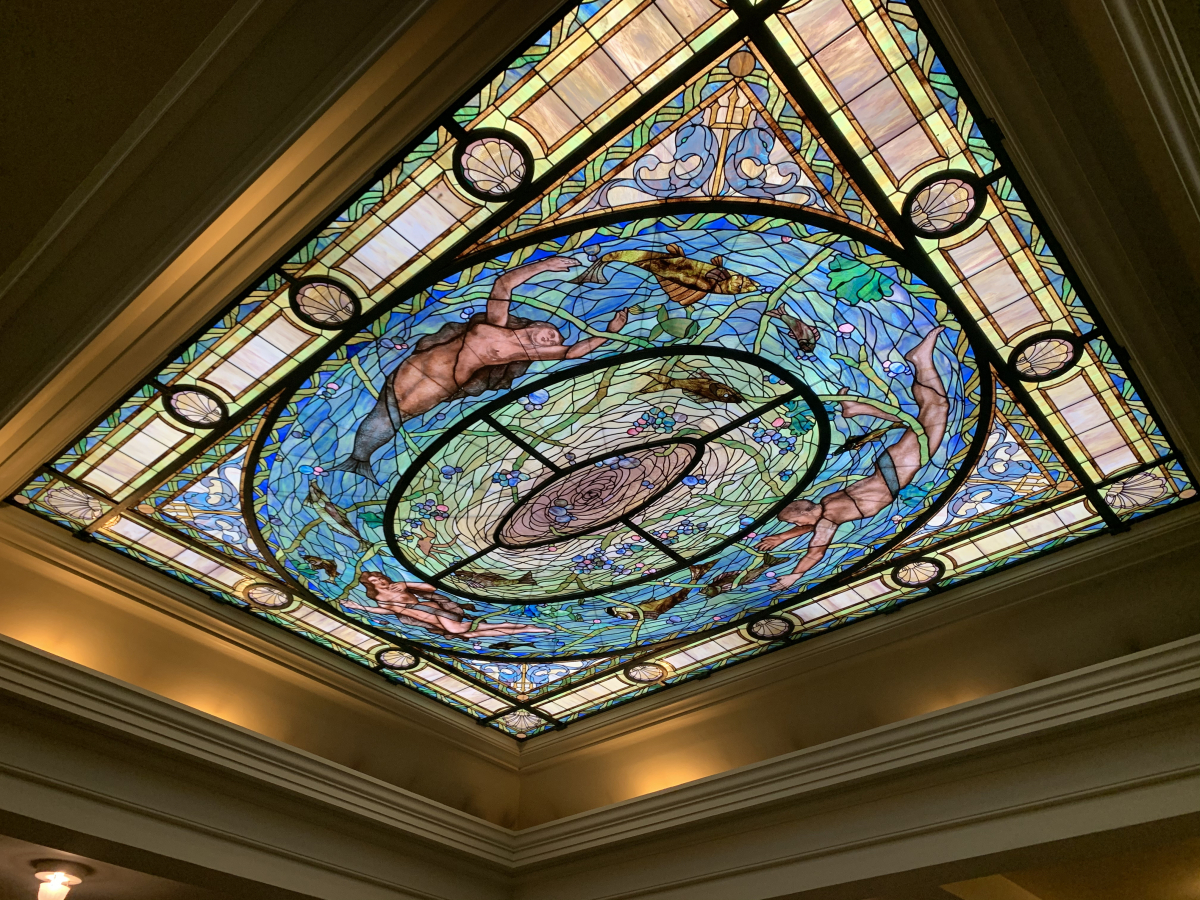 On our first morning in Hot Springs, myself, my husband, and our 17-month-old son walked the short distance from our grandiose 1924-era hotel, the Arlington, down magnolia-lined Central Avenue to the marble lobby of the Fordyce for a tour. Ranger Kary Goetz got one thing out of the way: There aren't any outdoor hot springs to bathe in. The water seeps out of the ground at a scalding 143 degrees, which is why the bathhouses control the temperature for bathers, at between 98 and 104. In the men's white-tiled bath hall, Goetz passed around a plastic bottle of thermal water, still warm. "You're holding history in your hands," he said, explaining the water fell as rainwater 4,000 years ago and is just now rising to the surface via a complex geothermal process occurring within the rock layers under our feet. Goetz then took us through a 1900s-era day at the bathhouse: First, soaking in the tub while an attendant scrubs your back and limbs; then being wrapped in hot towels, called "hot packs"; next, a few minutes in the vapor, or steam cabinet (sort of like an outhouse-shaped sauna); a dip in the sitz bath, a bidet-like structure said to soothe hemorrhoids; and finally the needle shower, in which pressurized jets hit you with water all over. 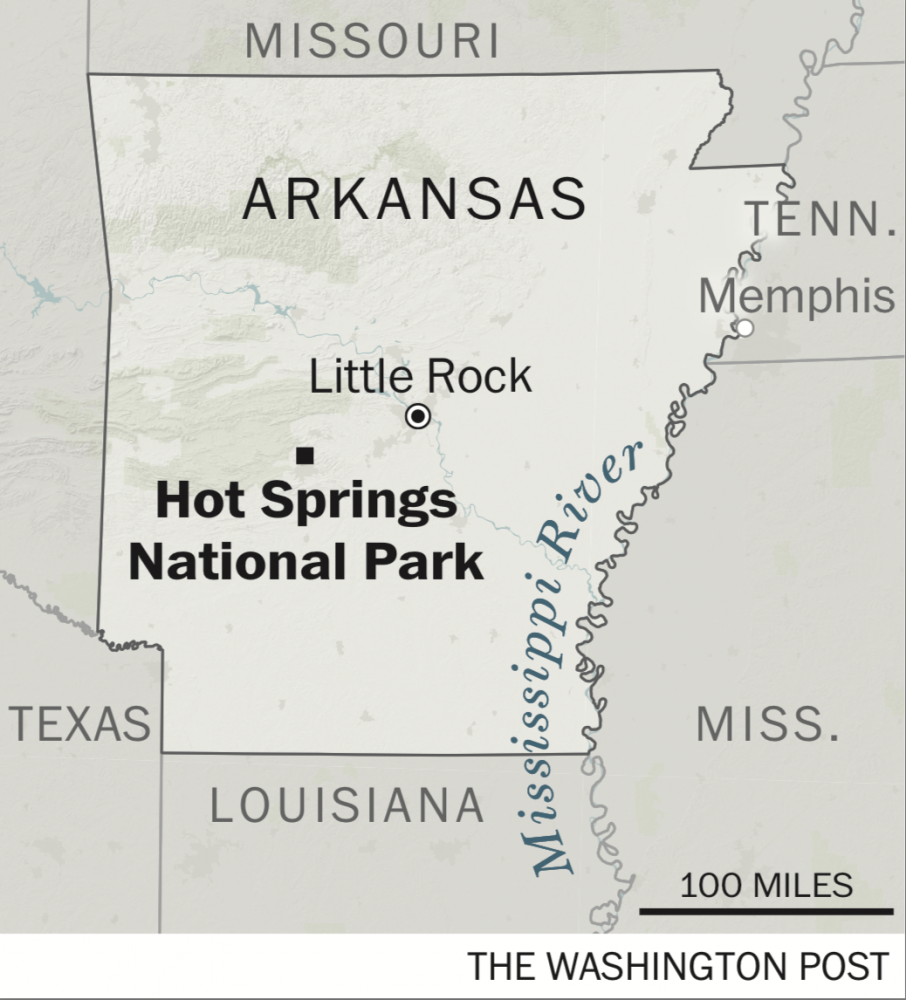 The oddest contraption - and Goetz's "absolute favorite" - is the long-defunct hydrotherapy bathtub, in which an attendant stuck an electric probe in the bathwater, issuing shocks to supposedly relax tight muscles or activate nonfunctioning ones. Our tour ended in the men's dressing room, where a stained-glass skylight depicts Neptune's daughter and other underwater whimsies in striking blues and greens. A statue of 16th-century Spanish explorer Hernando de Soto receiving a gift of thermal water from an American Indian sits at the center of the room - it's unlikely he ever did, but it sure helped with advertising, Goetz said. The Quapaw and Caddo peoples lived here for thousands of years, mining the region's ubiquitous novaculite, a type of flint stone, for weapons.

We wandered the rest of the museum, from the women's bath hall (their dressing room was much less fancy) to the sunny third-floor assembly room, where the conservative Edwardian-era men and women mingled amid an opulence of mosaic floor tiles, a grand piano and decorative stained-glass ceilings. (I was miffed to read men were permitted to sunbathe nude in the third-floor courtyard, while women had to exercise in formal lace dresses.) Down the hall, a large, hardwood-floor gymnasium may have attracted bathers hoping to see famous baseball players in town for spring training, which originated in Hot Springs in the 1880s. Indeed, many well-known men, notorious and otherwise, passed through Hot Springs, including Babe Ruth and Al Capone. "This was Vegas before Vegas was even dreamed of," Goetz told me. "Pick your vice." Across the street from elegant Bathhouse Row, cocaine dens, brothels, gambling establishments and clubs thrived. Capone kept tabs on his favorite casino, the Southern Club - now the Josephine Tussaud Wax Museum - from the window of his fourth-floor suite in the Arlington.

Speaking of Scarface, he also regularly took the waters, and may have used the alias Al Brown to bathe on Bathhouse Row (though there are no records, of course). He also frequented the Arlington's third-floor bathhouse, where I checked into my 2 p.m. appointment feeling a little nervous. Would it be weird being rubbed down by a stranger? I needn't have worried; attendant Glenda Porter, a 31-year employee, put me instantly at ease. After giving me a quick loofah scrub in the porcelain tub, she wrapped me in a sheet, toga-like, and instructed me to lie down on a lounge chair in the main bathhall, covering me head-to-toe in steamy towels. The heavy cloth immobilized my limbs, the whirlpool baths churned pleasantly in the background, and, with no smartphone or other distractions, I was forced to succumb to the present. Aha, I thought: Now I get it. The waters' medical benefit may be questionable, but the soothing impact on my mind was anything but.

The next afternoon at Buckstaff, I entered another beautiful marble lobby, where an attendant brought me into an old hand-operated elevator for a ride to the second floor. Though less spalike (no fragrant bath salts available with the tub soak, for instance) this bathhouse experience was more authentic, as I got to try a sitz bath, vapor cabinet and needle shower. The sitz bath was underwhelming, but I enjoyed the novelty of the vapor cabinet, where I sat sweating with my head in a wooden yoke. The needle shower was invigorating, the water reviving muscles made rubbery in the hot steam of the vapor cabinet.

Refreshed, we explored more of Hot Springs, which, as the second smallest national park (Gateway Arch edged it out in 2018) is compact and easy to navigate. At Hot Water Cascade, a waterfall near our hotel, tendrils of steam rose from the water as it tumbled down the rocks, prompting a chorus of "Wa wa!" (water) from my son. We strolled the Grand Promenade, a red-brick path above Bathhouse Row and a conduit to some of the park's 26 miles of hiking trails on Hot Springs Mountain and North Mountain. At the town's "jug fountains," locals queued to fill bottles of thermal water; the public consumes about 700,000 gallons a day. "Good?" I asked one woman. "I wouldn't be wasting all this energy hauling it if it weren't," she said, laughing.

Driving back to the Little Rock airport the next morning, a regret popped into my mind: Maybe I shouldn't have sold that antique claw-foot bathtub that came with my apartment. I could use a good soak now and then.

Located in one of the historic bathhouses, this is the first brewery in a U.S. national park. The Hitchcock Spring Kolsch is delicious; pair it with a soft pretzel and the kolsch-infused beer cheese. Open daily at 11 a.m. Entrees from $9.

Relax in thermal waters piped right from the hot springs, hike through rare shortleaf pine forests, or look out over the rolling Ouachita Mountains from the 216-foot-tall Hot Springs Mountain Tower. Daily ranger tours take visitors through the various bathing and medical facilities of the luxurious Fordyce Bathhouse, as well as to the park's visible hot springs, where they explain geologic processes behind the mineral water. Free park admission and tours.

The Gangster Museum of America

Get the lowdown on Hot Springs' seamier side in this museum, whose audiovisual galleries explore the lives of famous criminals in the Valley of the Vapors. Highlights include John Dillinger's death mask and original gambling equipment from a Prohibition-era speakeasy, including roulette tables. Open daily 10 a.m. to 6 p.m. Sunday to Thursday and 10 a.m. to 7 p.m. Friday and Saturday. General admission $15 adults, $14 seniors and $6 children 8 to 12.