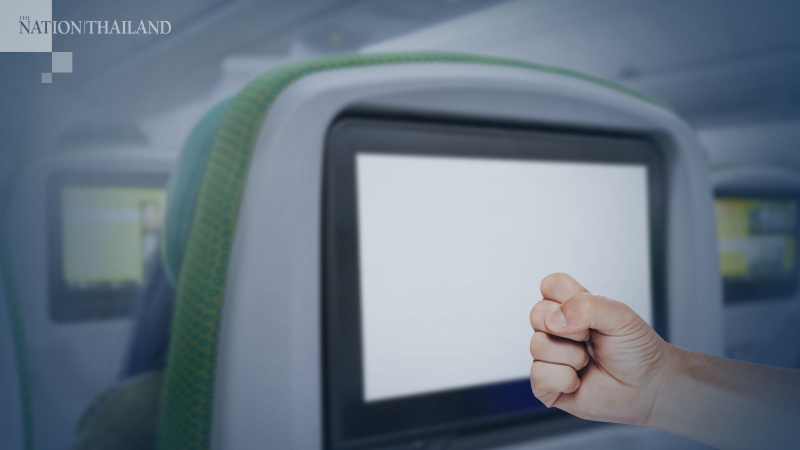 A passenger on an American Airlines flight took to social media to shame a fellow passenger, who she said repeatedly nudged and punched her seat after she reclined it.

"After much consideration, and exhausting every opportunity for #AmericanAirlines to do the right thing, I've decided to share my assault, from the passenger behind me, and the further threats, from an American Airline flight attendant," a user named Wendi Williams wrote on Twitter last week.

The incident began on an American Eagle regional flight from New Orleans to Charlotte after Williams was returning from a teaching convention. A man - who is unidentified in the video clip posted to her Twitter - allegedly asked Williams to position her seat upright as he ate. She did, and when he finished, Williams reclined her seat again.

"At that point, he started hammering away at me," she wrote. "That's when I started videoing and tried to call" the flight attendant.

Then, according to Williams, the man became agitated and began to perform a punching motion against the back of her seat, shaking her as the nudging continued. "He was angry that I reclined my seat and punched it about 9 times," she wrote. "HARD, at which point I began videoing him, and he resigned to this behavior."

Williams said after she called for a flight attendant to intervene, not only was she of no help but, in her view, she also made a bad situation worse. "She rolled her eyes at me and said, 'What?' she wrote. "She then told him it was tight back there and gave him rum!"

Another Twitter user, who responded to Williams' tweets, asked how she was feeling after the experience, to which Williams replied using "#whiplash." "I'm in pain," she wrote. "I have 1 cervical disk left that isn't fused - the first 1 which allows me some mobility. It's scary bc it's this the kind of injury that could do it in."

In the time since the incident, Williams said she's had to absorb medical costs and a loss of wages. "I've lost time at work, had to visit a doctor, got x-rays" and cited headaches for a week, she wrote.

Reaction across social media has been split, with hundreds of users admonishing the male passenger's behavior: "There is no reason to allow people to act like he did. That's why they allow you to pick your seat when you book your flight. Obviously he picked the wrong row or bought the cheapest ticket available," one user wrote.

And hundreds more have criticized Williams for being cavalier about reclining her seat, which some fliers do not view as a right: It "seems you started this in the first place by reclining your seat too far. Just don't recline," one user wrote, adding, "Basic etiquette."

As for the airline at the center of the incident, Williams said she spoke with American Airlines after causing a firestorm on Twitter - the video is nearing 300,000 views - but wasn't satisfied that "they apologized but really didn't accept any responsibility for the flight attendant's actions":

"I was contacted via phone by @AmericanAir, they apologized but really didn't accept any responsibility for the flight attendant's actions. I will be calling the FBI to press charges against the 'man' who mistook me for a punching bag. Anyone who doesn't like it, I don't care!

As of Thursday, it's unclear whether Williams has or will pursue charges against the passenger or American Airlines.

"We are aware of a customer dispute that transpired on American Eagle flight 4392, operated by Republic Airways on January 31. The safety and comfort of our customers and team members is our top priority, and our team is looking into the issue," the airline said in a statement to The Washington Post.